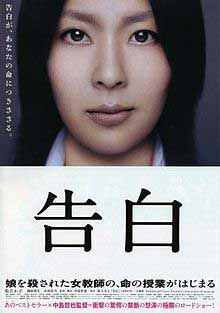 From Japan comes Tetsuya Nakashima psychological/thriller Confessions which is based on the novel Confession by Kanae Minato.

The film involves a middle aged school teacher who finds out her four year old daughter has died and she is convinced one of her pupils is responsible for the murder.

The film was chosen as Japan’s entry into this years 83rd Academy Awards ceremony in the Best Foreign Film category- congrats! Confessions will premiere on October 30, 2010 at London’s Empire Cinema.