Home | News | A New ‘The Thing” Banner Is Unveiled At NYCC

A New ‘The Thing” Banner Is Unveiled At NYCC

So this years New York Comic Con and something of a surprise added to it’s list of events, photos, comic geeks, and special guests. During the convention a few onlookers took a photo of the new The Thing banner, with a tagline of “Before it was unleashed, it was discovered.” 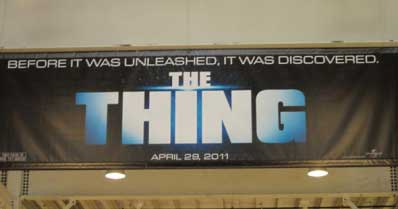 According to sources close to the film, The Thing was going to be classified as a prequel even though production company would much rather call it a ‘”remake” to the original since it appears that most of the storyline hangnails the original anyhow. See The Thing April 29, 2011.