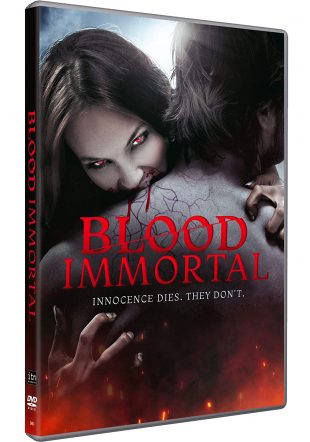 Log Line:
Follows three generations of vampire women that find their lives put into jeopardy by their environmental and economic surroundings.

Synopsis:
The vampire genre gets transcended and elevated in this intimate and equally thrilling saga with three stories that unfold in interlocking episodes, “Blood Immortal” explores the desperation and desires that unsettle the lives of its immortal vampire characters: a vicious land speculator Mr. Duncan (Richard Tyson) subdues an offer to a dying widow and mother that resorts to vicious coercion; only for centuries later Josephine now herself fending for her daughter’s survival after she drinks tainted blood in the aftermath of an economic collapse, and a lonely economics professor forms an unlikely bond with one of her students, who happens to secretly be a vampire. “Blood Immortal” captures the human condition and portraits of women in this tale about survival, economics, and love.

It is a vampire film that holds some modern commentary on the dangers of social Darwinism and laissez faire capitalism along with other economic and environmental issues done in more of a cerebral and non-didactic way.

The film also is a condemnation offear-mongering culture that often leads to horder culture that we saw this year in grocery stores and coin shortages during the pandemic.