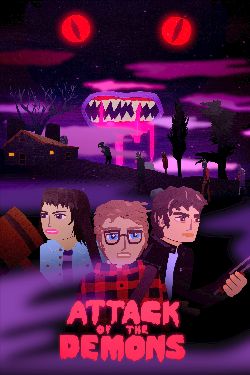 Direct from a notably well-received festival run, and arriving in theaters this Halloween, the frighteningly-fun animated horror treat just for adults!

South Park meets The Evil Dead in Eric Power’s “grisly and gorgeous mix of Fulci and puppetry” (The Austin Chronicle) Attack of the Demons in virtual theaters October 30 and On Demand and DVD November 3 from Dark Star Pictures.
The year is 1994 – For centuries, a demonic cult has been plotting the destruction of mankind. When a small Colorado town is overrun by a legion of mutating demons, three non-demon hunter friends must use every skill their minds can fathom to stave off the demon apocalypse.

Laced with a killer new soundtrack, and featuring the voices of Andreas Petersen, Thomas Petersen, Katie Maguire, and Eric Power, Attack of the Demons reanimates the living dead this November!

Tags ATTACK OF THE DEMONS