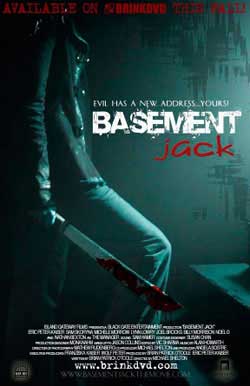 A few years ago Jack Riley finally snapped and killed his abusive mother. After killing his mother he went from house to house killing entire families and arranging their bodies in poses that would suggest a happy home life. Jack was just a little boy when all of this happened so of course he didn’t go to jail, but he just got out of his institution and he’s out to finish what he started…..sounds like we have a new slasher on our hands.

After the success of a little independent movie that turned into a franchise (maybe you’ve heard of the Saw films?) it seems that young film makers themselves are trying to find a way to get a franchise started. Michael Shelton’s Basement Jack does just that by bringing us a new slasher by the name of Jack Riley who was overly abused by his mother, genre veteran Lynn Lowry. Jack’s mother uses all sorts of ways to punish her son, but her favorite seems to be playing with electricity.

We are offered several glimpses into Jack’s childhood throughout the film and while some do come off as genuinely creepy, others are simply there it seems to fill up space. Before the credits roll we are treated to a flashback where a young Karen is making out with her boyfriend in the car when they suddenly hear a police report on the radio. Karen becomes scared and suggests that the two of them go inside. Did I mention yet that there is a thunderstorm going on, Jack seems to only strike when thunderstorms are occurring as it reminds him of the love his dear old mom gave to him. Karen and her boyfriend get inside of the house and totally do not see Jack hiding in the corner, but the viewer does almost to the point where you have to ask “Really you don’t see that guy right there?”

As the young couple looks around they start noticing that her family members are indeed dead and that’s when Jack finally comes out of the shadows to attack. It is during this attack that you notice the use of CGI during Jack’s kills. I know that the film may be on a budget but I am not a fan of CGI and in my opinion it kind of hampers the death scenes (especially later ones in the film). Karen and Jack get into a struggle and get to the door where a police officer is waiting to fire his gun. After the gun is fired we are treated to a wonderfully creepy opening credits sequence where we get to see various images of arranged corpses and cracked baby dolls (that gets explained sort of later in the movie).

After the credits are over we see an older Karen making her way back to town. She has found an abandoned vehicle on the side of the road and simply pulls the dead body out of it and takes it for her own. We are also introduced to Officer Chris Watts, Chris is a rookie on the force and he tends to make a lot of mistakes which makes him kind of the laughing stock of the force. In the first scene that we meet Chris he is being yelled at by his superior because a case had to get thrown out because the rookie officer did not read his perp his Miranda Rights.
Chris is sent on his way and while making what he thinks is a routine traffic stop he meets Karen.

Something about Karen rubs him the wrong way; she doesn’t even know the zip code for the city that she is supposed to be from. Chris is about to get to the bottom of things when he is suddenly called over his radio, it seems a cop and his family has been killed by Jack Riley, or Basement Jack as he is known on the school yard. Chris isn’t really told anything about this Basement Jack fellow, and the police force soon is dismissed to start doing house to house checks attempting to find the psycho before he strikes again. They had better hurry though because there is supposed to be a huge electrical storm heading the town’s way, and Jack seems to like to strike during the storms.

Chris runs into Karen again as she is getting a newspaper from a machine. She tells the rookie cop her business and suddenly Karen turns into the Laurie Strode/Dr. Loomis character of the film. Jack wasn’t able to kill her so he has been hunting her, but at the same time she has been hunting him. She even admits to Chris that she followed him into this particular town and that this time she is going to stop him. She also decides to finally tell Chris and the viewer the back story behind Basement Jack. Seems his mom used to abuse him, mainly using electricity.

After years of this he finally snapped and killed his own mom before going on a killing spree that left a bunch of families dead. He got the name Basement Jack because of his ability to hide in his victims basements for days at a time where he studies them just before he kills them, he also became a school yard taunt (kinda reminds you of a certain other slasher doesn’t it).

While Karen and Chris are telling the viewer about Jack we get a wonderful scene in which we see Jack doing what he does best. He sits calmly in the basement until finally standing to his feet and grabbing a machete to head up stairs. As Jack walks up the stairs one can’t help but to think back to Max Schreck’s classic performance in Nosferatu. We don’t really see Jack kill most of the family; it isn’t until the nosey neighbor kid just walks in that we see Jack attack. In a genuinely creepy scene the neighbor boy goes to hide in the shower where he finds another body propped up inside, Jack of course stabs him through the shower curtain and again we are reminded of yet another classic film.

The police get to the scene of the crime and Chris shows up with Karen. One of the other officers asks if Karen’s vehicle is hers and when she says that it is they put her under arrest for driving the stolen vehicle. The police think that they have their killer but Chris knows they don’t. Karen knows that it was Jack that did the killing and that he is going to kill again, and wouldn’t’t you know it the storm of the century is on its way into town.

Michael Shelton’s Basement Jack isn’t a bad movie; it’s just a low budget film. Jack Riley could easily step up and be a franchise player if the series were able to be picked up. Jack spends most of the film looking like a dirty Charles Manson as he lurks in the basements of his victims; I think it would have been a lot scarier for Michael Shelton to dwell on these scenes more. Towards the last reel of the film though Jack takes on a different turn in which he covers the lower part of his face with a broken off piece of a doll’s face, he also gets his hands on a much better knife. Jack is definitely the silent but deadly form of slasher and it works very well for this character. He even does a nod to another silent stalker later on in the film….you will just have to see it.

The body count is decent for the film, but the deaths are hampered by the use of CGI effects. In one scene when Jack storms into a police station we are treated to a shot of two police officers getting scalped by Jack’s knife. I though the idea of the top of victims skulls flying off towards the victims is a good one, but why do it with CGI, it really did hamper the scene. Not all of it is CGI however; during the police station raid we are treated to a shot of one officer attempting to stuff their intestines back into their body.

Basement Jack has a lot of heart and the cast seem to be enjoying themselves, the over acting by some of the smaller cast members got more than its fair share of chuckles out of me. I think that Jack Riley stands right up there with Jason and Michael, his back story and concept is the stuff of nightmares. The film is left open for a sequel so let’s see some more effort put into the FX and I think we might have a franchise player here. 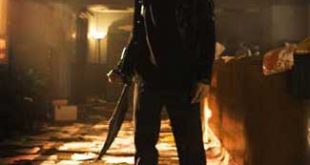