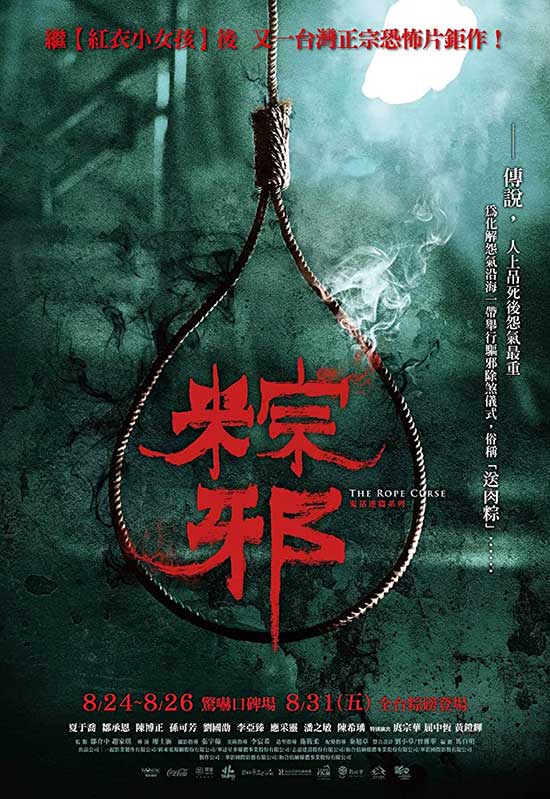 Hoping to make a viral video by streaming a mysterious rope ritual, a couple falls into a deadly curse instead that turns their lives upside down.

Directed by Shih-Han Liao, The Rope Curse is a predictable ghost horror that goes to all the places you would expect. Nevertheless, it still manages to provide nominally enjoyable entertainment to pass the time.

Set in the Taiwanese countryside, the story centres around an ancient ritual called “The Rope Ritual”. It is believed that the spirit of a person that hang themselves can create a curse that will reside on the rope used, and the power of the curse will keep on growing the longer is left to its own devices. To prevent this from happening a special ritual must be performed, ending with the rope being buried at sea, making sure it never returns to harm anyone else.

A wannabe Youtube star Jia-Wei (Jason Tsou) has caught wind of such a ritual being performed in her girlfriend Shu-Yi’s (Kimi Hsia) hometown and together his friend A-Gwai, they plan to live stream the event in hopes of getting more followers and making some serious money in the process. Meanwhile Shu-Yi is wrestling with her own demons from the past and having to return home to witness something so sinister, does not sit well with her. Nevertheless, she goes along with the plan in hopes of Jia-Wei getting the success he so desperately wants. However, when something goes wrong in the middle of the ritual and the cursed rope does not quite make its way to its intended watery grave, the unlucky threesome soon finds themselves in middle of paranormal events, with deadly results.

The Rope Curse is a garden variety ghost story. There is a budding friendship ending in tragedy, horrible school bullies that are just asking to get cursed, and past sins coming back to haunt those who thought to have escaped them. Certainly, nothing we have not seen before.

Nothing about the story is particularly surprising and if you are at all familiar with the certain stereotypical story arcs of Asian horror, you will most probably have no problem guessing where the story is going. The ghostly appearances are slightly too few and far between and after a strong start, seem almost completely forgotten during the middle of the film, regardless of the ample opportunities for the angry spirits make its move. Some of the film’s best scenes are the ones involving the ritual at the centre of the story and as such, are something that deserved more screen time than they actually get. The plot also has some rather annoyingly convenient “twists” that might induce an eye roll or two from some viewers and the way some of the characters are portrayed feels unnecessarily stereotypical, reinforcing the predictable nature of the film.

However, somehow despite all this, The Rope Curse ends up being a semi entertaining package. Even though I found the story predictable, I still cannot say that I was bored at any point during its 106-minute running time. It may be slightly lacking in the scare department but is nevertheless well paced and the two timelines present in the story play very well side by side.

As always, I am a sucker for a good revenge story, especially when it involves bullies, so seeing the bad guys (or girls, as is the case here) getting what they deserve is always going to be a hit with me. Special points for the one final twist in the very end of the film. It not only brings the story to a wonderfully dark conclusion, but was genuinely quite unexpected and thus, a lovely surprise indeed.

While I would not recommend anyone to go out of their way to see The Rope Curse, if you do happen by it, by all means give it a go. It will not be the most memorable piece of ghost horror you will ever see, but a solid little film that will keep you entertained for a little while at least.