The Simpsons are in their 20th season and in all those years have lampooned several horror films with great delight. This is typically done during their Halloween special Treehouse of Horror episodes where they go all out and will typically parody several films in a single tale. 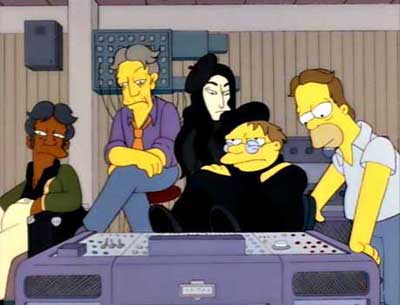 Let’s take a look back at some of these and relive our favorite moments in Simpsons horror moments.

THE SHINNING
– TREEHOUSE OF HORROR V
No that is not a typo at the top because as Groundskeeper Willy says “Do you want to get us sued!” The Simpsons did a terrific job with this from beginning to end. When Homer and the family agree to take care of a hotel they begin the drive up there which takes nearly a week because of constantly having to drive back home for something inane they forgot to do like turn off the stove.

On the last trip they forget Grampa at the last gas station but Homer leaves him there in frustration. Mr. Burns and Smithers are there ahead of time cutting off the cable and removing all the beer from the hotel. When Smithers suggests that this is the reason that the last caretaker went crazy Burns says that if he is right he owes Smithers a coke. During the tour we see the elevator of blood but the only shock comes from the fact that it usually gets off at the second floor. Left there on their own Homer quickly discovers that there is no cable and beer but seems calm at first.

When Marge check his typewriter to see what he has been writing we expect to see that all work and no play makes Homer a dull boy but no it’s a fake out because instead it says Feelin’ Fine. When lightening strikes at the moment though we see written all over the walls No Cable and No Beer Makes Homer Go Crazy! Homer begins chasing his family through out the house with an ax.

In one very funny scene Homer axes two wrong doors and each time uses a different late night or news show saying. He does get the third one right though and uses the opening for 60 minutes. Bart uses his Shinning to call for Willy but when Willy arrives he is quickly axed down. The family is left to fend for themselves and run out into the cold where they find Willy’s portable TV. This calms Homer out of his murderous rage and they all freeze outside while watching the TV. They become stuck watching the Tony’s which makes Home crazy all over again.

A NIGHTMARE ON EVERGREEN TERRACE
– TREEHOUSE OF HORROR VI
This one follows fairly closely to the original. Bart begins having nightmares that Groupskeeper Willy is out to kill him and in one dream hits him with a rake. When Bart wakes up with the scratches on his chest he begins asking questions.

He finds out others have had these dreams too but when he confronts his parents about it they both deny knowing what could be going on. Through much pleading and begging however they learn that Willie was set on fire through a faulty furnace and when he runs into a PTA meeting the parents did nothing to help. They simply watched him burn until he swore he would go after their children while they slept. Bart realizes he must defeat Willy in the dream land but tells Lisa to stay awake and wake him if he looks to be in trouble. However their plans fails as they both fall asleep and find it difficult to defeat Willy. At the last minute however Maggie saves the day and everything is as it should be again.

THE DAY THE EARTH LOOKED STUPID
– TREEHOUSE OF HORROR XVII
We are treated to a simpler, sepia toned time of the past with lots of excellent references. Lenny wonders why Grampa keeps say World War One and all Grampa will say is “you’ll seee.” The town of Springfield hears the radio broadcast of War of the Worlds as made famous by Orson Welles. They become crazy with fear and begin looting and rioting. However it is suggested that the Aliens are only killing humans so if they pretend to be animals the Aliens will not come for them.

They all throw their clothes off and roll around in the mud making animal noises. When Lisa gets back to town the next day though she tells them all it was a prank. Angrily they go back to the way things were and the Aliens take this as a great opportunity to take over the world. This time around nobody believes that the Aliens are real and when Orson Welles shows up to convince them it’s real Chief Wiggum says “Do you want to be punched in the nose-bud?” The Aliens destroy everything with their lasers as part of Operation Enduring Occupation. The Aliens never did find any WMD’s (Weapons of Mass Disintegration) however.

DIAL ‘Z’ FOR ZOMBIES
– TREEHOUSE OF HORROR III
In this classic episode Bart uses black magic to try and bring Lisa’s cat Snowball back to life. However in doing so they accidentally bring people back to life as Zombies. As Zombies are prone to do they start to infect others in town but Homer barricades all the houses windows and doors…except the back door because he forgot to while watching TV.

As the Zombies break through Homer sacrifices himself to let the family escape but the zombies feel his head and knock on it but move on because they want brains. Homer catches up to his family and in getting to the car Homer shoots zombie Flanders. He didn’t even realize Flanders was a zombie however. He just shot to kill Flanders. They race to the school where more famous people are killed such as William Shakespeare and Albert Einstein. Bart finds a solution through a counter spell and sends all the Zombies back to their graves.

As the family gets back to normal life they sit in front of the TV and say in a zombie like monotone voice how glad they are that they did not become zombies. TV though seems to have made them into what they fought against.

There are so many more that could be covered. The list goes on and on and we hope to see more of these in the coming future. The Simpsons are notorious for their movie references, and love of cinema in general.