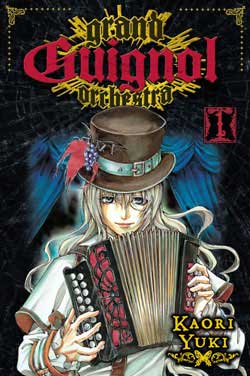 VIZ Media has announced the launch of a new series from iconic manga creator Kaori Yuki. Her latest series, “Grand Guignol Orchestra,” will be published under the Shojo Beat imprint on October 5. Lucille loves heading up the traveling Grand Orchestra, roving from town to town, entertaining the masses and making money. But now the musicians have met their toughest audience yet: people infected with the Guignol Virus, turning them into zombie dolls intent on killing all humans!

Grand Guignol Orchestra is destined to become another dark masterpiece from the queen of gothic manga,” says Pancha Diaz, Senior Editor, Shojo Beat. “The new series combines all of the elements that have made Kaori Yuki’s work a favorite among manga fans. With richly detailed artwork and a twisted tale of horror and tortured romance, Grand Guignol Orchestra takes readers to a recital where no one may make it out alive!