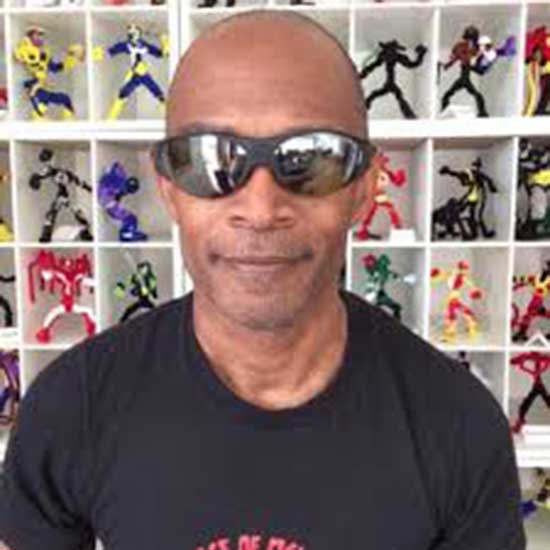 Alton Simpson took some time to talk with Horrornews.net about his unique comic series, VAMPIRES OF NEW JERSEY. It’s The Sopranos Vs. True Blood. It was created by Alton and the “characters were designed with Mahathir Buang who drew Silver Surfer for Marvel. It features the work of West coast Animator Conor Cole and Variant cover art from UK artist of the Jawbreakers series Simon Bennett. “You can pick up Alton’s comic’s at Ron’s Comic World in Mount Holly, NJ, Jay and Silent Bobs in Red Bank, NJ, Plunder Palace in Cherry Hill, NJ, Comic Lair in Trenton, NJ, Amalgam Comics, Comic Universe and Atomic City Comics in PA.

Check out Alton’s interview and make sure to check out Vampires of New Jersey.

Hi Alton, how are you? Vampires of New Jersey is such an original concept. I was reading about the comic and you describe it as a “mash up like True Blood Vs, The Sopranos.” How did this idea manifest for you?

Alton- I had never seen True Blood when it was on TV. So, I wrote a script, for a film that I was shooting about ten years ago. It was in the Philadelphia Independent Film Festival. It streams on Amazon. One of the guys on the set, he came in and started raving about True Blood. The movie we shot was like The Usual Suspects so it was about low-level crooks. Then True Blood went off the air and somebody gave me the DVD’s and I started watching it and I noticed its based in the South. I just said, well what if these vampires showed up in New Jersey? Tony Sopranos New Jersey, what would that be like? So, that was the premise.

What is the movie called that is on Amazon?

Why did you decide to turn this into a comic book?

I was working on my doctorate and when you do that you write and write and write, then turn it into the committee and they tell you its awful and then you throw it away.

Yes, that’s true and horrible at the same time.

Alton- Then you write another two hundred pages and this goes on for years. So, I got to the point where I created a media company before we did Jose Luck. I always wrote scripts. Once I came up with the idea, I needed to write something that was just totally free to write and I wouldn’t be judged on it, it would be just for fun. That was Vampires of New Jersey. I write it as a script because its something that I would want to see. Whenever I write something I say, well nobody has done it this way, this is something I’d like to see them do. It comes out as a script and if you pitch it you want block out the scenes or have it as a storyboard. It makes it easier to pitch to the studio. I posted online and my wife said, if you’re going to do it, get a good artist. So, the artist who drew Silver Surfer from Marvel liked the True Blood versus The Sopranos idea. He took an interest and helped me design the characters and did the initial layout for the first three issues. He drew for Marvel and he also drew some of the early issues of The Walking Dead. Then from there the artist that draws it now is a Disney animator from the West coast. 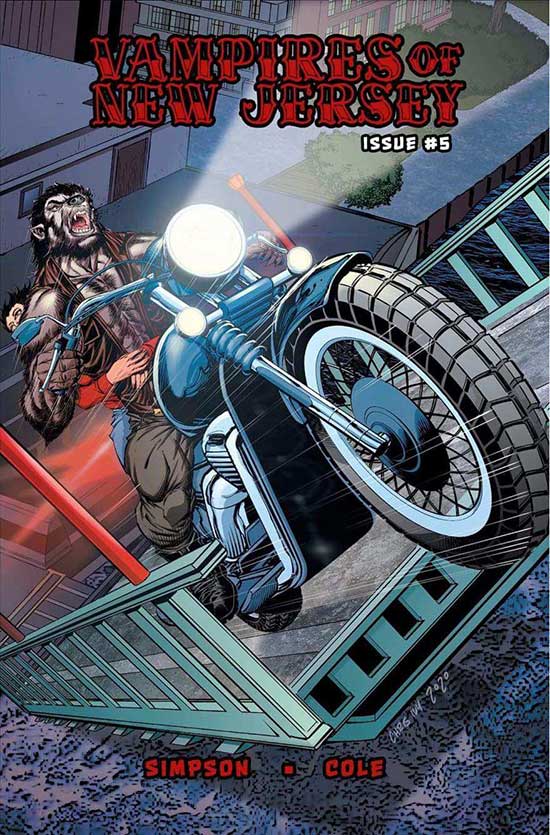 That’s awesome. The comic is so unique. Both of those artists have so much talent.

Alton- Yes, with these things I got lucky.

Tell us the comic story. How did you get the comic book out there?

Alton- Being able to write a script as a comic book frees up an independent filmmaker because you’re not constrained by cost. You don’t have to think, well I could never do this. You think, if I had the money what would I do? So, it opened up a whole new door. I printed the comic and published it. I took it to my local store here in New Jersey, Ron’s Comics. That’s my local place where I usually buy my comics and I’ve been buying comics and going to comic cons since 1978. I was one of the original comic con guys, I was going when it was completely just geeks. So, I took it to Ron and he said well the papers good. I’ll put it the store. The next day a friend text me and said, I went to get your comic and it sold out. That was the fall of 2017 and it sold out, every issue is sold out is sold out in most of the stores that we’ve been in for the last two years. 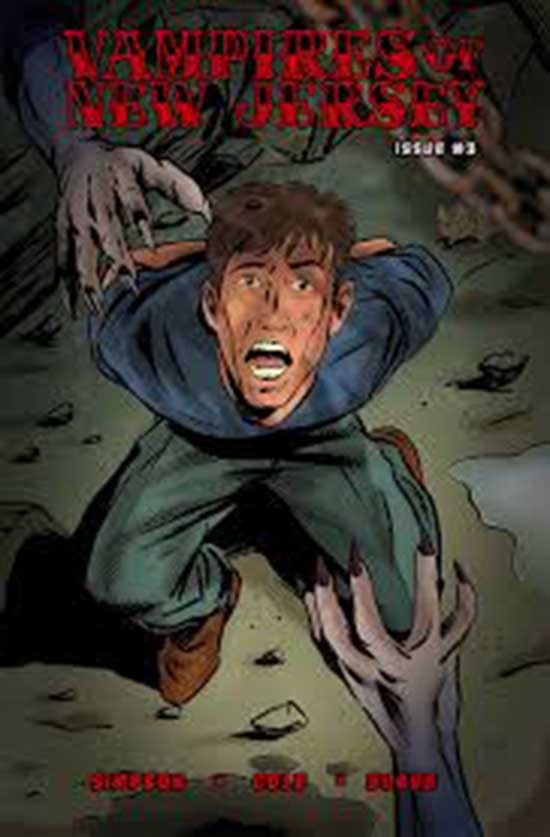 Alton- I did cons, New Jersey Horror Con and Wizard World and what would happen at the cons is people would buy the comic and then they’d go home and say, dude I love the comic, could you put it in my local store. I would say, okay where’s your local store? They would say, Oh Jay and Silent Bob’s place. I’m in South Jersey but I’m a big Kevin Smith fan and everybody knows Jay and Silent Bob’s Secret Stash. So, I said to my wife isn’t it like a famous place? She said just go up there and talk to them. So, I went up and Mike from the Comic Book Men TV show was like, Kevin loves independent people, we’re going to put it right up front and it actually sold out there three times in a year.

That’s awesome. How did you feel when you first heard that the comic sold out?

Alton- It was kind of shocking. If you say your going to write a hit thing, it probably isn’t going to be a hit thing. It just of did what I thought would be interesting. If you took Kevin Smith, True Blood, Tarantino, and The Sopranos all mixed together. They are the best version of us and they always have something ridiculous to say or interesting and funny. The movies I go to see, I like those types of characters. So, when it took off, I was kind of surprised. Its been fun. I am up to issue six now. 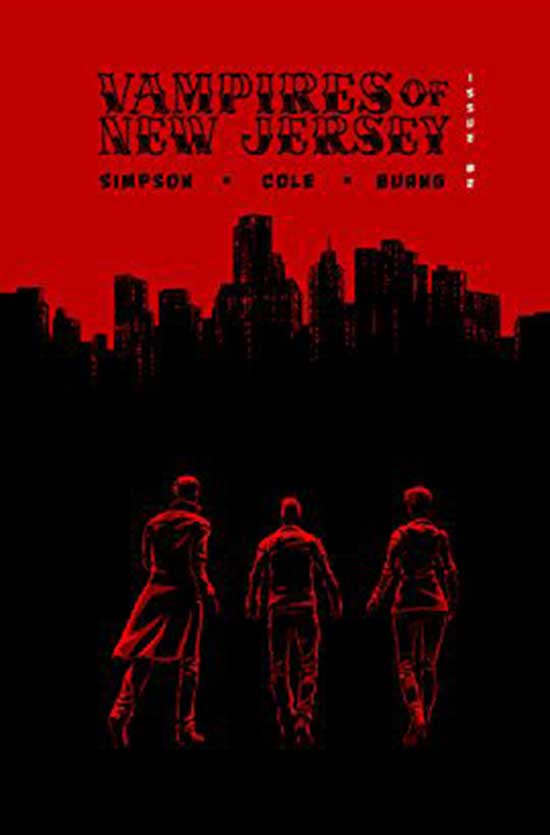 How long does this process take to put the comic book together?

Alton- Well I usually write it in the fall and I write it like a movie. I write 100 to 120 pages and my artist has really figured out, based on what I am writing and describing. It usually comes to maybe three issues. His day job is working with a major corporation. He’s busy certain times more than others.

I saw a few people wearing merchandise and you have graphic novels available? Tell us about it.

Alton- People actually ask for this stuff. It’s kind of weird. I’ll make a t-shirt for myself. Steven Spielberg and Spike Lee used to make a baseball hat with a logo on when they were doing a movie. I will take a logo and put it on a t-shirt. The spinoff from Vampires is Werewolves of Brooklyn. 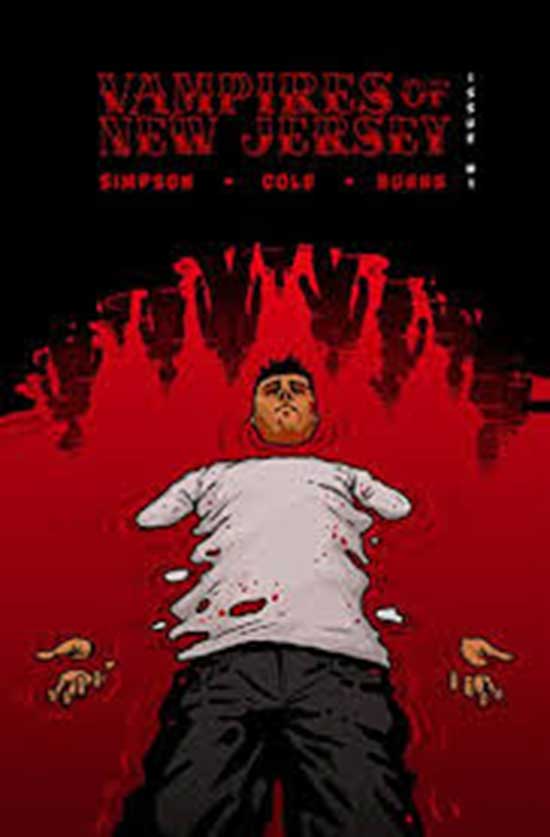 Alton- no, not at all. I was in finance after I got out of college so I did insurance and mortgages. One of the guys next to me said he had written a script. We started talking and we both noticed we knew one guy, we had one person in common and he had actually gone to film school. The three of us got together and shot a short film which actually turned into…. A wreck (laughter). It was awful but from that I’ve learned to be more self-sufficient as far as knowing how to edit, knowing every aspect of what it takes to produce anything is helpful and with the internet you can teach yourself almost anything today. I was the guy who would be in the library. I always tell my kids you have the greatest library of all-time and what are you doing? Your watching cat videos on YouTube but, that’s entertainment.

I agree, you can learn all kinds of stuff. How to fix things, editing for writing and so much more.

Alton- I’m not the best editor, my wife is really good. She is a programming director for a tech company. I can write, shoot, direct, edit, and score. I taught myself how to encode my film in order to upload it to Amazon. I always recommend that to independent people. Learn as much as you can about every aspect of the craft no matter what the craft is so that your comfortable discussing it. Then you can figure out what you want to do.

Makes sense. What do you think is the most important or valuable piece of advice you would offer?

Alton- Whatever it is that you are doing, have fun with it. I think that comes through, it comes through the work and to whomever you are trying to reach. Its good to be successful with things and to make money with things but its also good for your spirit to be true to yourself and try and do your thing, whatever that thing is. Its different for everybody. I don’t think what I’m doing with this is an exact path for anybody else but I am happy to explain it in what I’m doing in case it would help them do what they want to do. 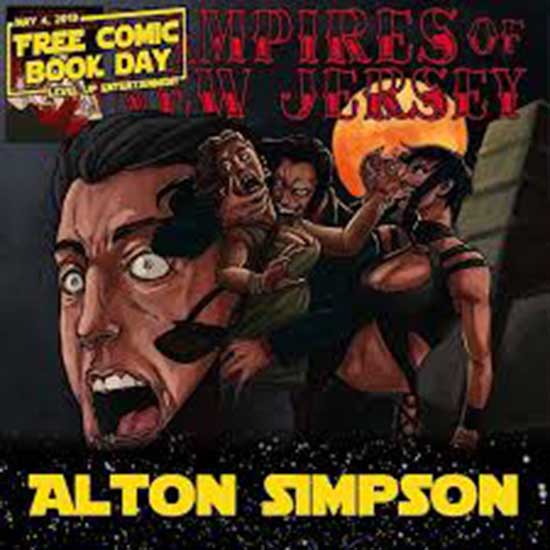 What would you say to the fans reading the comics?

Alton- I would say that it’s a joy to tell the story. I am a fan of the genre and past versions of vampires. I just saw the new Dracula on Netflix. I thought that was an interesting take. I think the key to things is to put your own spin on it no matter what it is. If they want to do something artistic, they should try it. You don’t know where things are going to go? This was a one-off comic I did to express myself. Its turning into more and more issues and more people.

Thank you so much Alton for taking the time to talk with Horrornews.net

Alton- Thank you. My pleasure.

The comic books are available on Amazon. www.amazon.com/Vampires-New-Jersey-Alton-Simpson/dp/B07NF5N4F2/ref=sr_1_1?keywords=Vampires+of+New+Jersey&qid=1579804065&s=books&sr=1-1