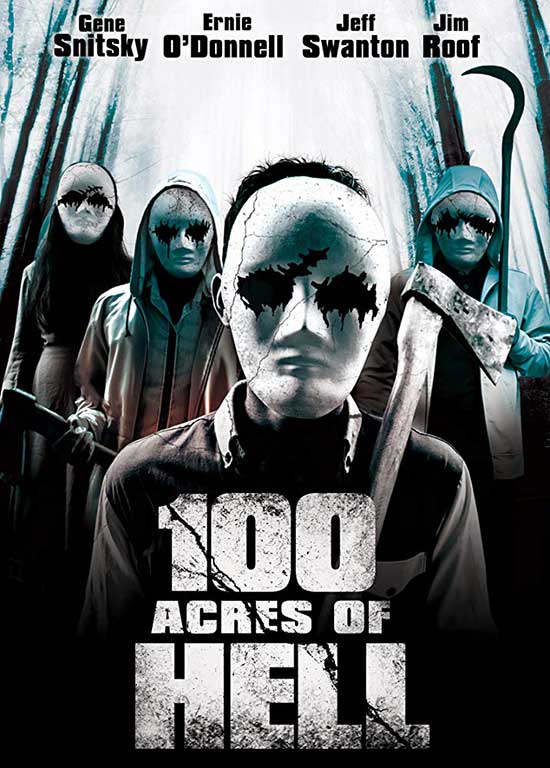 When ex pro wrestler Buck Severs travels to an abandoned wildlife preserve with his friends for ‘Bro’s Weekend,’ they become the targets of a deadly manhunt and Buck must find the fighter in himself before it’s too late.

Everyone hates spoilers, but some reviews require spoilers in order to address certain issues with and/or in the film. A spoiler warning is in place. Please read at your own risk if you have not seen “100 Acres of Hell”.

The film opens with events back in the 1970s. We see the ranger as he discovers a mutilated animal that is the likely work of Jeb Tucker. The ranger goes home and tells his wife what he found as they have dinner. As one would expect with a horror film, Jeb attacks them. During the struggle, Jeb takes a shotgun blast to the face. He shrugs it off and finishes killing the couple.

Buck Severs is an ex-pro wrestler who was pushed into retirement due to injuries and the deaths of his wife and daughter. He wanders through his days fighting against physical pain and the emptiness from the loss of his family. His life has apparently been little more than this for 3 years.

He is contacted by his buddy Trent who reminds him that Buck is supposed to participate in The Return of Bros’ Weekend. Basically, their group of male friends heads out for a “boys only” weekend for fun, adventure, and over-indulgence in drink and food. Buck is hesitant due to his depression and physical discomfort, but, in the end, he gives in and agrees to go.

He should have given into his urge to isolate. His group of friends are braggarts and testosterone slaves. Hey, it’s all good because breaking Buck out of his dark frame of mind is best done by insults, apparently. His friends, especially the obnoxious Bo, are more than happy to leverage Buck’s wrestling career to convince some local women out to their camp site.

Speaking of their camp site, it is in a local 100-acre section of forest that has been avoided for nearly 30 years after the murders of the forest ranger and his wife. The locals are quick to point out that it is all an urban legend, yet just the mention of that camp site sends the townfolk into spasms of anger and fear.

Oddly enough, fear of the place does not stop local dweebs and Hollywood-style bikers from visiting the camp site while Jeb picks off the cast one by one. This weekend is not what Buck Severs signed up for.

Gene Snisky, also known by his wrestling name “Gene Snitsky”, is a retired professional wrestler in real life. His huge build is the selling point because you know that him and Jeb Tucker, the person stalking them once they break into the closed-off forest, are going to butt heads at some point. Watching two beefy guys, both former professional wrestlers, beat the Hell out of each other can be fun.

Getting to that part of the film is a different story.

The film moves quickly enough, but the presentation makes the progression feel far slower. Shots seem to go on longer than they should. There are lots of scenes of Buck’s friends acting like teenagers who embarrass Buck when all was needed would have been a couple. All these tacked-on scenes do is present Buck as a decent and sensitive person, which you should have figured out from the opening montage of him wandering streets while looking soulfully at the sky, people, pavement, and everything else.

Once at the camp site, we are stuck with character interactions while they ignore a mountain-sized guy wearing an animal skull mask who is standing behind twigs less than ten feet away. The smell would be enough to give him away, but that would stop the film from hitting its well-worn plot points leading to the cast being whittled down until the big showdown. That aside, none of the characters are interesting enough to justify this large amount of time spent listening to them spew lines that allow Gene Snisky to look bewildered or bemused in turn.

Before Jeb and Buck meet up, we are shown the fate of the cast members who disappeared while everyone wandered alone amongst the trees. The guys are dead, but the women who came to the camp site are tied to beds inside Jeb’s hideout. Seeing this pushes Buck into the final confrontation with the backwoods killer after he releases the captives.

Instead of some well-staged, knockdown battle between two former wrestlers (Jeb is played by Sam Anoai), we get a nighttime fight with poor lighting and a camera so close that the viewer is robbed of seeing the brutality of two men fighting for survival. At times, it seems like they are simply positioning themselves for the next body slam or feigned punch. The fight that has been building since Buck stepped into the forest fizzles like most of the other elements of the movie.

Accepting all of these disappointments is expected with a low-budget film shot in the wilderness to save the film’s budget. Up through the final confrontation, “100 Acres of Hell” is just another stalk-and-kill flick. 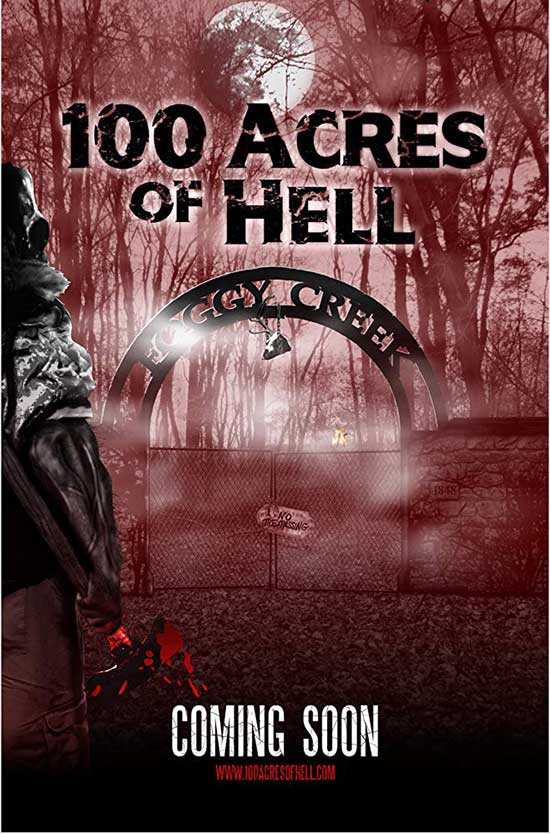 What tanks the film and bitch-slaps the viewer at the same time is what happens after Jeb is killed.

Buck is confronted by more people who have been living in the woods. Turns out that Jeb had a whole family as did those who came before him. The bloodline is getting weak, and they need new blood, which is why the women were captured. All of this is explained by Trent, Buck’s friend since childhood, who wasn’t really dead. Trent brought Buck out there hoping the likely fight would make Buck want to return to the ring and forget his lost family.

After Buck pounds Trent’s head into a bloody smear (easily the best part of the entire film), he goes out and finds the most traumatized woman from the group he set free. He brings her back to the hideout where she is promptly tied down for “breeding”. Oh, screw it, she is brought back to be gang raped. As she screams, the camera spins to show Buck grinning as he has now taken over as the family head.

The film spends every scene making Buck into a character with a strong moral character who, in spite of his former career, is not a big fan of violence or cruelty. In seconds, you are expected to accept a total reversal of his character just for the sake of a “got you, didn’t I?” ending?

No thanks, “100 Acres of Hell”. By attempting to be edgy, the filmmakers turned a dull but watchable horror film into a worthless pile of rancid feces that is not worth the 85-minute runtime.  Come back when you can tell a story without an unjustified cheat ending.