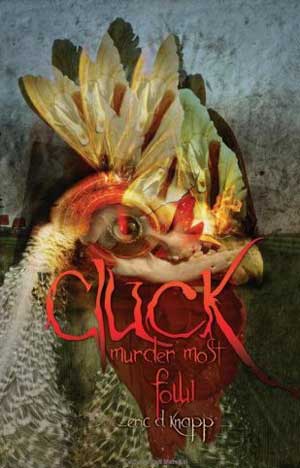 Cluck is a novel about a topic that one generally does not come across every day: ghost chickens. While there is a small somewhat cult following of the topic (re: Lloyd Kaufman’s Poultrygeist: Night of the Chicken Dead film), this book definitely has a unique story to tell.

The novel begins with the story of a Rooster (always capitalized throughout the novel) at the Mouth of Hell, awaiting entry, with no recollection of how he arrived there. Yet, Hell would not let the bird enter, as although it had a list of sins that would deem Hell as its place of eternal rest, the Mouth reasoned that these sins were largely based on innocence; most of the bird’s doings were acts of instinct, which could not ultimately be deemed as “sin.” Hence, the Rooster was sent back to his home, where he loudly and persistently awoke the unsuspecting farmer with a “Cock-a-doodle-doo!”

Chapter Two redirects the story to a time long before the Rooster came face-to-face with the Mouth of Hell. From here on out, the story follows in chronological order. The rest of the novel begins by telling the story of how a Rooster and a boy were born on the same day. While both their births were quite ordinary, their paths were soon to intertwine in the most unexpected of ways: by an Inter-spectral Rift. A flash of energy struck the Rooster, giving it more strength and power than any other rooster or chicken in its flock, as well as giving it the ability to talk and think more along the lines of a human. The second flash of energy struck Arnold, giving him the ability to see souls (mainly chicken souls).

From then on, this second “sight” of Arnold’s left his mother quite confused and worried. Arnold tried to suppress it as much as possible, but his mother could still tell something was wrong. She ultimately decided to send Arnold to a priest for guidance, as a result. Once this priest discovered Arnold’s ability, he sent Arnold to a special group of people, who called themselves The Order. Here, his second sight suddenly had a meaning—he honed his skills and used his ability to exorcise ghost chickens. He was even deemed the special Exorciste de Volaille; he was the “chosen one.”

Arnold (who from that point forward was called Armand) was quite good at his job, until he was sent to Bobby Garfundephelt’s farm in an attempt to free him from ghost chickens that were haunting him. The moment Armand walked into the place, he knew it was a situation he had never dealt with before. These ghost chickens were smarter than any he had previously encountered; they had set traps and actually sought to hurt Bobby, and they had a powerful head Rooster to lead them. And, Bobby seemed to be possessed as well! Read the book to find out why these chickens were haunting Bobby, what happened to Armand, and if he was able to save Bobby.

For the purpose of getting the “bad” out of the way first, I would have to say that my only real quarrel with this novel was the length. At 336 pages (333 not including the Epilogue—Half the number of evil, 666, I wonder if the author did this on purpose??), it seems a little lengthy for a novel about dead chickens. But, I cannot really complain, as while some sections could have been shortened, the novel did keep me entertained throughout. Plus, if the author was creative enough to “end” (for all intents and purposes) a horror novel at page count 333, more power to him!

And now, for the good: This story was well written, creative, and ultimately a very fun read. The author’s style of writing is what intrigued me the most and kept me reading. His writing style is very poetic, making the words and sentences flow easily together. Furthermore, his sarcastic language was an entertaining addition to a horror story. His novel reads much like a Bruce Campbell flick: rife with blood, gore, and guts, but keeping it all within a light and comedic mindset.

The novel is not a philosophic masterpiece, per say, but I doubt it was meant to be. Yet, although dealing with the quite absurd topic of ghost chickens and ghost chicken exorcists, it still has some points to reveal about life (and death). When people discuss the concept of Heaven and Hell, many times it is seen as a place for humans to go after death. This book presents the idea that it is not just humans that travel to these afterlife destinations, but animals, as well. Moreover, we are all looked upon and judged equally (according to the specie’s understanding of life, that is—the Mouth of Hell could tell that the Rooster worked off of instinct and did not have the same understanding of life that a human has).

Furthermore, the book discusses the idea of fate. Was it pure coincidence that both Arnold and the Rooster were struck by the same bolt of energy, connecting them on an otherworldly level, and for them to find themselves confronting each other later on in life? The author suggests, “no.” This was their calling; this was their moment of understanding—of figuring out their purpose in life. Arnold was finally given a worthy challenge, and the Rooster ultimately found the peace he was looking for.

There are some other philosophical points of interest in the book, as well. For instance, both the farmhouse and Arnold’s car have a sole of their own. The idea that man-made objects, humans, and animals all have the ability of thought and to discern the idea of existence truly makes one think of how one should strive to treat others with respect and understanding, be it your best friend, a complete stranger, a chicken, or even just simply properly taking care of your belongings, such as your house.

If you enjoy horror comedy, and a little bit of the bizarre (a philosophic ghost rooster that talks…and a ghost chicken exorcist?), definitely check out this book! If nothing else, read Cluck for the sole purpose of being able to answer the question, “What’s your book about?” with the appropriate, yet slightly awkward response of: “Ghost chickens!” The reactions I got from people were quite entertaining!