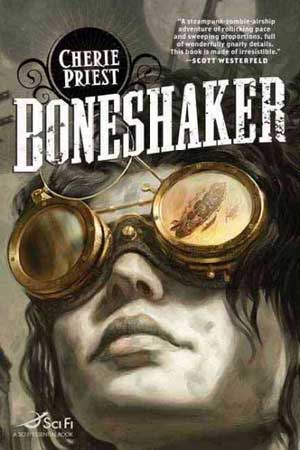 “The Naamah Darling drifted past the station’s clock tower a little too close for comfort. The blank face of a clock as big as a bedroom stared dully back at them, no mechanisms to make it keep the time and no hands to display it. I t was a ghost of something that had never happened.”

That last sentence perfectly encapsulates the idea of steampunk in my head: a relic of the spirit of a time that never really existed the way it is being presented. Knowing my predisposition, you can see why I’ve never been all that excited about the genre. But then someone told me about this book chock full of both zombies AND pirates and positively chocking on dirt, grime and soot. I had to at least give it a try.

In standard SP revisionist fashion, we are given a Civil War era Seattle that is leaps and bounds from the Seattle most historians would recognize, a city whose heart has been walled up to contain both a horde of zombies and the heavy, thick blight gas that created them. Cut off from everything around it, it is an area of lawless abandon and quick, dirty life. Now, Briar Wilkes, one-time wife of the man presumed to be at fault for the release of the gas (and the destruction of much or downtown Seattle) must go into the town to find her son, who is determined to rewrite the popular opinions regarding both his father and grandfather.

The main thing that makes this story work is Briar herself. She’s a model of the blue-collar ethic, a woman who may not be the best or the brightest, certainly isn’t the nicest, but who does whatever is necessary to secure the survival of herself and her child. This is a woman who has managed to build a respectable life for the two of them despite the ever present cloud of her poor choice of husband. Flawed, for sure, but resolute and indomitable. This is my kinda woman. Her motives are simple but understandable. In other words: to hell with heroes, she comes across as a real human being. I like that.

Overall, Cherie has a knack for creating believable characters that you want to root for. Kick ass, survivor types that fall perfectly into the mold of the American Pioneer spirit. People scrabbling through the dirt to survive, but not pissing and moaning about their fate. Good people to sit down to a few beers with.

I also really like the fact that the zombies are given a bit of a back seat to the larger social and political situation of the city. Yes, I know those words are heresy on a horror website, but the best zombie stories have always put the shambling corpses in the back row. They are the catalyst for the real trouble that occurs and there is plenty of that going on here. We’re talking about the equivalent of a full scale revolution in the basic power structure. Romero should be proud.

And, she avoided the nasty Sci-Fi pitfall of spending too much time detailing the nuts and bolts of gadgets. I can’t help it, I despise hard sci-fi for that reason. The rocket is a rocket, the blight gas is some thick, heavy gas that kills people and turns them into zombies (trioxin, maybe?). Now, let’s get onto the story.

On the down side, the whole moved a tad slower than I would’ve preferred. I just never felt that indescribable need to get back to the book and find out what was next. I never had to fight with myself to put it aside at work and there was never the temptation to lose sleep reading it into the wee hours of the night. I can’t place anything particularly bad about it, but I never found that ineffable zazz that gets me really excited about a book.

I don’t know how Boneshaker stacks up as steampunk, but you could do a lot worse as a revisionist-zombie-takeover-rescue-pirate-class-warfare rampage.