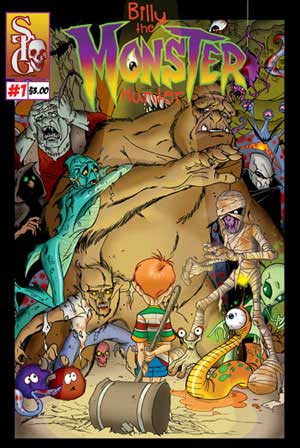 Billy the Monster Hunter is a new property from Scare Tactic Graphix, most famous for Bubba the Redneck Werewolf. Billy the Monster Hunter, written by R.H. Rusef, is a charming comic that does a good job exploring childhood fantasy involving things that go bump in the night, much like Monster Squad, Monsters Inc., and Little Monsters. The book revolves around the Billy, a young boy plagued by the boogey man. The boogey man explains to other monsters in their own dimension that he especially enjoyed scaring, and making trouble for young Billy even going so far as to break all his toys and let Billy take the blame. Billy’s father gives Billy a small toy hammer.

Billy’s dad told Billy that the small toy hammer would transform into a weapon to defeat the boogeyman. The next time the boogey man confronts Billy learns that all his toys magically transform into full sized weapons that have the skills and attributes of their real life counter parts. Billy uses his hammer, green army men, Construction Carl, and Ranger Rob, to clobber all the monsters that sneak into kid’s rooms to scare them. This is a great comic book for all ages. The pencils by Shawn Surface and the colors by Vince Vincent fit in very well with the playful mood of the story and Surface does an excellent job with designing the monsters to be recognizable but not too scary as to alienate readers who enjoy lighter tone of the book and possibly want to read it to their kids. My only problems with the penciling and coloring are looks of Billy.

Often Billy facial expressions are without detail and sometimes the vibrant colors in “Billy” used are a little too intense for movie monsters. Periodically darker colors are needed even to balance the vibrancy even in a kids book. I spoke to the colorist and discovered that this was his first try at coloring, and I anticipate he will get better with future issues. The eight page backup titled “Crabgrass Field” a Cloverfield parody was amusing, but again the bright colors distract from the spoofy comedy, considering how dark Cloverfield was.

I have to admit that replacing the Statue of Liberty’s head with the Big Boy restaurant statue was hilarious. Although the art style doesn’t really fit in to a parody of Cloverfield, the characters acted appropriately enough. The characters in the back-up run around taking things into their own hands just like in Cloverfield, taking Billy away from his tank and Construction Carl, causing more problems than helping them.

The problem of the giant monster is solved when Billy gets his hands on a stuffed Barney, which promptly takes the city attacking monster down. Billy the Monster Hunter has its flaws, but is a fun casual read and can be enjoyed by anyone.