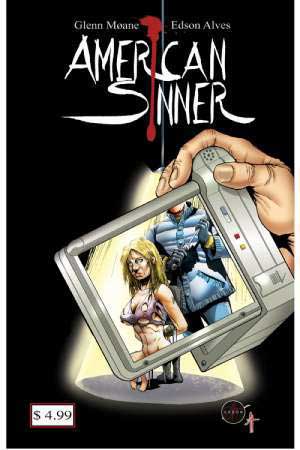 Before I start I want to mention that this book deals with some very adult material.

American Sinner takes the subject of a serial killer and shows it in a very real disturbing light. Sure there are books out there that dive into the mind of a killer but this one explores the mind of a Snuff Film creator. Where you might typically see a guy being angry or demented and killing people here you meet a character named Frank who only sees killing as a way to make money. He has no conscience telling him right from wrong in what he is doing other than how to make some cash and get away with it. He also has to deal with a moron for a partner as he makes sure that he can keep him on track when things start to go wrong.

Artwork: 3.5 out of 5
I felt that at times the panels were very nice. The more intense fighting and action scenes I felt things kinda started to get more abstract looking. The tone of all the scenes though stayed consistent with the whole of the story and overall it was a good job.

Story: 4.5 out of 5
I will openly admit that when I read a description on the book I didn’t have high hopes for it. But I felt the storytelling here was great. It honestly read like I was watching a movie. I think Møane did a nice job of making you actually care about the antagonist. Especially towards the end of the story I was torn on who to root for. The interactions between characters were nice and the story flowed very well.

Dying Breath: 4 out of 5
I think that this story will only appeal to some which I kinda feel is a shame. But this is, in a way, a slasher style story just with a different agenda for the killing. I think that covering the medium that he did was risky but in the end rewarding and I have to say that if there is a sequel you better believe that I am signing up for it. This was a definite diamond in the rough.