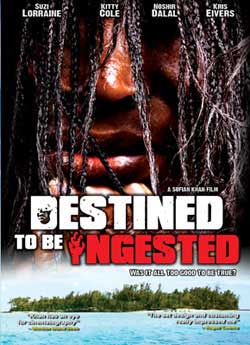 Anna and Tom were a down and out couple— until one day, their fortunes changed. One lucky lottery ticket later they found themselves living the good life, cruising the South Pacific with their fancy new friends, enjoying the essential three C’s of luxury living: Champagne, Caviar and Cocaine.

But when the group of yuppies lose their way, and are marooned on a mysterious jungle island, their charmed lives suddenly become a string of gruesome deaths.

QUICK FIX:
Just sit right back and you’ll hear a tale, a tale of a fateful trip, that happened back in 1987 as a wealthy vacationing yuppie douchebag foursome are sailing to a swanky resort in the South Pacific aboard their fancy yacht-type thingy. Unfortunately for them though, their Captain is a dumbass and takes a wrong turn at Albuquerque which gets them lost amongst many different islands. After basically some “eenie meenie miney moe”, they choose an uncharted island and decide to go ashore. And then the cannibals come.

A couple is killed, the Skipper on the yacht sees this and takes off like Lindsay Lohan running from the cops, and the last couple is stuck to try and find a way off the island. But wait, there’s more – a dude is killed and his wife and a cannibal fall in love, but he can’t take her home to meet Daddy because any and all fraternization with outsiders (other than as meals, I take it) is strictly forbidden, Romeo and Juliet style. But after six months of hiding her in the jungle, the cannibal Romeo and the now-pregnant Juliet go to the village to meet the Fockers. And then the zombies come. Wait…what???!!!

RAMBLINGS:
When I was but a teenager during the time when this movie takes place, I was eating up all the cheesy goodness of cannibal flicks of that time that I could find on our local video store shelves, and I was loving every blood-drenched second of it. Sadly though, through the years many of those old VHS tapes were either stolen and/or lost by old friends, by ex-girlfriends or just completely thrown out my ex-wife, and I’ve never really taken the time to rebuy or revisit them since.

But I must say, DESTINED TO BE INGESTED was quite a throwback for me to the days of old, and I really had a blast with this one. At first I wasn’t sure if it was going to just be a subtle parody of those old flicks since the humor went away about a third of the way into it, turning it into a suspenseful stalk-n-slash-n-eat, family drama-type thing. But then the zombies come…

And that, folks, is when it turned back into full-blown comedy for me. I don’t think it was really intended to be that way, but the f*ckers showed up out of the blue, I didn’t even see it coming, and I just laughed my ass off and enjoyed the ride after that since I figured now the gloves were off for real, and unless aliens from outer space came down in their wacky flying machines and zapped everyone into dust that there couldn’t possibly be anything more shoved into this movie that was doing so well treading that very fine line between serious horror, tongue-in-cheek homage, and downright self-aware parody. Don’t worry though – the aliens didn’t come.

Any complaints? Yeah, could have been longer than 70 minutes and still kept me entertained. And the redubbing of dialogue in the studio during postproduction could have at least been timed better with the actors’ mouths. But hey, with this flick they could have very well been going for the bad dubbing jobs from the old days, who knows? If memory serves, this sucker hits DVD on October 5th, and you really need to check it out for yourselves. If you’re anything like me (and hey, one or two of you out there are, that much I know for a fact), then I highly recommend you snag a copy as I think you’ll get a huge kick out of this one.

Tags Destined to Be Injested