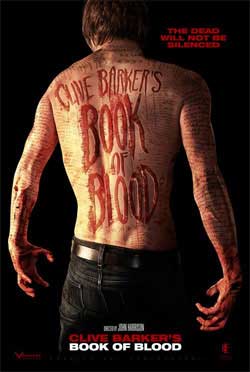 Based on the writings of horror master Clive Barker, this creepy thriller centers on paranormal expert Mary Florescu (Sophie Ward) and spiritual medium Simon McNeal (Jonas Armstrong), who band together to investigate the mysterious occurrences of an alleged haunted house. When hostile spirits begin to speak through Simon in a horrifying fashion, he and Mary discover that the house may be a crossroad of spiritual paths.

Clive Barker burst onto the literary scene in the early 1980’s with a collection of short stories entitled The Books of Blood. Five more volumes followed and are now available in two oversized paperback editions with an excellent reflective forward by the author in the first omnibus.

Six of the stories from the first collection have been turned into films, most recently The Midnight Meat Train and the upcoming Dread. The collections wraparound tales, The Book of Blood and On Jerusalem Street are the basis for this film adaptation.

The bound man begins his narration with the paranormal murder of a teenage girl. Professor Mary Florescu, a teacher on the paranormal, is working with another investigator named Reg on a case involving the same house where the girl was murdered months before. During one of her classes, she meets Simon McNeal, a young man who claims to be clairvoyant and invites him to join the investigation. After the first night in the house, strange things start to happen. Simon is covered in cuts and bruises and the words “I serve Hell and in turn it serves Me” are written on the wall of a closet.

The casting of the film was wonderful. Sophie Ward brings Professor Florescu to life with believability that makes you never question her dedication to the search for the truth about the paranormal. Jonas Armstrong’s Simon is a doe eyed innocent who never quite seems to know what’s going on and yet has something to say that’s just beneath the surface.

The special effects in this film are fantastic, from Simon’s wounds to the amazing “Crossroads” scene at the end of the film, everything looks believable and the very few times in the film where a ghost is seen, it’s done in such a way that they look more like the descriptions of full body apparitions then an actor who’s been CGI’ed to look transparent.

I can’t really go into anymore details about the story without ruining it for you; however, if you’ve read the short story The Book of Blood then this film won’t hold any surprises for you as the film stays very true to the original story, while expanding on the original text.

This brings me to something that I need to address about this film, and any Clive Barker adaptation that’s done well. Book of Blood is not a normal ghost story and is much more of psychological horror film than anything else. There are a few gorey scenes but the emphasis is on the atmosphere and relationship between Simon and Mary.

I highly recommend this film to anyone who’s looking for a good, unusual horror film. There are few twists and turns that pop up now and again in the film but none of them are arbitrary or pointless and will most likely catch you off guard if you haven’t read the original short story.

If you enjoy Clive Barker’s work or you’re looking for a good psychological horror film, then Book of Blood is worth owning, but for those who aren’t yet Barker fan’s or didn’t like the ending of Midnight Meat Train, I recommend renting this film when it hits your local video store.