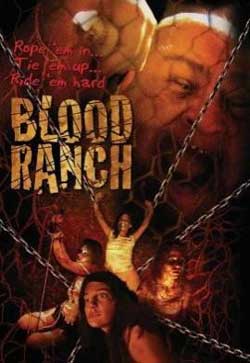 When their car breaks down on a desolate two-lane blacktop, four university students, an Iraq War vet and a spooked young woman seek help at a ranch that houses a bizarre cult of deviants. Talk about hospitality: New arrivals are treated to a steady diet of mutilation, dismemberment and torture. The grim truth is that no guest has ever made it out alive. But that doesn’t deter the most recent visitors from giving it the old college try.

Blood Ranch had a pretty solid start with a car full of happy teens headed to the Burning Man festival for some hardcore partying and listening to some tunes. On the way they stop and pick up a man who is standing on the side of the road holding a sign stating he is headed to the same place. They pick him up and Val asks him if he has any wraps because she is dying to smoke the weed that is burning a hole in the bottom of her purse- you can tell she’s a total pot head! They stop at a half ass convenience store and Val finally gets some papers.

A little girl who is dragging her dirty doll around by a noose tells them they are all going to die. Is this a premonition? Or does she know something that they don’t? The woman store clerk shoo’s her off and tells them to take this shortcut that will get them where they are going much quicker. Their dumb asses decide to take her advice and they end up almost running over some bloody beaten girl who ends up puking all over the windshield. They put her in the car with the intention of getting her to the hospital or at least some help.

Out of nowhere this black van comes ramming into the car. After a few miles of this sh*t the hitchhiker Alex gets out and shoots at the van with his gun. The van slowly backs up and then takes off. Of course now the car is trashed so they have to get out and walk to look for help. Jason stays with the bloody girl Megan while the others start trekking down the road. They come to a ranch owned by the weeble wobble looking Spider and you know just by looking at him that he is the owner of that damn van. He opens the gates and invites them all inside. 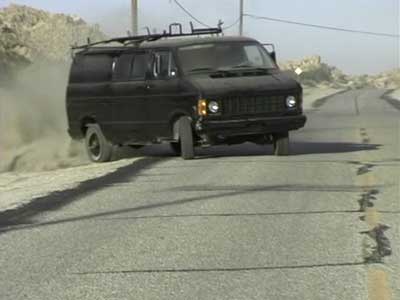 Ben has to use the bathroom and can not wait. Mute takes him to this port of potty type thing, you know one of those old wooden outhouses. He cops a squat and a noose is sneakily being lowered from the ceiling. Next thing you know he is hanging over the dirty toilet. Spider tell the others to come see his car and then he’ll give them all a ride to get help. So they see the black van and realize they are in some serious trouble. Jen and Val take off running in separate directions to try and hide so they can try to get out of there alive.

They run thru a maze of filthy decrepit rooms and places that by the looks of it should of been closed down by the board of health! There are women and a midget locked up in cages and the premises is filled with a bunch of horny men. There is also a trailer where a half dressed man shoots darts and the board is in the back of some victims back skin. Val is stuck in that trailer listening to him ramble on since Spider wants her all to himself. Ew I’d rather be dead than have to do anything with that gross ass man. Will Val escape? Or will she be trapped there forever as his personal love slave?

Blood Ranch was in the vein of a lot of other horror movies that I could compile a list off but I don’t want to bore you with that. Just think of all the movies that have teens stuck out in the middle of nowhere with nasty people hunting them for either their skin or too eat them. I am sure you get my point. It was exactly like that except with out all the scary intensity that a lot of them had! I have read that there are people out there that enjoyed this flick so you never know you could be one of them, I just wasn’t…