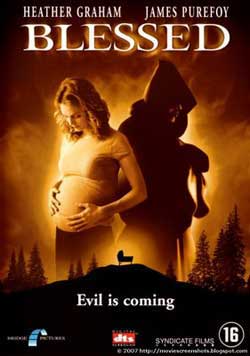 A young woman (Heather Graham) is impregnated with the devil’s spawn in this horror tale. Anxious to become parents, a young couple’s dreams come true when they’re given the funds to pay for an expensive fertility treatment. But the joyous couple soon learns that their medical-miracle twins are actually the devil’s children. James Purefoy, Fionnula Flanagan, David Hemmings and William Hootkins also star.

People sometimes go thru extreme measure to conceive when there bodies can’t seem to do it on their own while others just are as fertile as a rabbit! Married couple Craig and Samantha Howard seem to be giving it their all and not getting anything in return. Is all hope lost when it comes to their dream of starting a family? Or should they try one last desperate measure in order for Sam to become pregnant and make their wishes come true? If you wanted to have kids wouldn’t you go to great lengths to help your wife conceive?

Sam is a teacher and her husband has been laid off with pay so they figure now would be the perfect time to try for a baby. Sam is a little worried since they wouldn’t be able to survive on her pay alone. Craig is also an author who has been pitching his book around trying to land a sale. It just so happened that his agent gave him the good news that a publisher is interested in his work. So now everything is starting to look up for the young couple. They were renting a house for the summer and living in a cramped apartment in the busy streets of New York City.

They decide to go to this fertility clinic where they’ll have only one shot to become incubated since the procedure is extremely expensive. Dr. Leeds tells them that it could take three to four cycles of this procedure in order for her to conceive and in many cases it has even taken up to ten times in order for the woman to have the egg attach. Luckily for them the first time is a charm when the devils DNA is added and Samantha becomes pregnant with twins. They are beyond thrilled at this and can’t wait for their beautiful babies to be born from the invitro fertilization process. Too bad they have no clue of what has just been inserted inside of her!

The couple’s NY apartment gets vandalized and totally trashed so they end up taking the offer to move into the bigger and beautiful house across the street from the other one they were renting. It’s way more expensive but now that he has gotten a book deal and a nice fat advancement they can finally afford it. They move in and are invited to their real estate lady Betty’s party. When they go you notice how weirdly connected everyone is and wonder at what exactly is going on. They almost all seem to be in on some master plan!

The bigger Sam’s belly gets the more she realizes that something is just not right. There is a man in a black hooded sweatshirt that is following her around and seems like he wants to harm her in some way. One day she goes shopping for baby stuff at the mall and he swiftly chases her out onto the street where she is so busy checking on how close he is to her that she doesn’t realize she is standing in the middle of the road. She looks up just in time to see a truck but it’s too late and she gets hit. They rush her to the clinic to check on the babies status.

Everything is ok luckily for her and she only has a little time left before her due date. You know as you watch the film that she was filled with evil but you can’t figure out what will become of these babies. Will she carry them to full term? Will she be caught by the man in the hooded sweatshirt who obviously wants those babies disposed of asap! She goes in for a check up and says it feels like she is being scratched inside by burning fingernails. Finally she goes into labor, will we see two monsters come out? Or will it be normal looking children that have the devil inside of them?