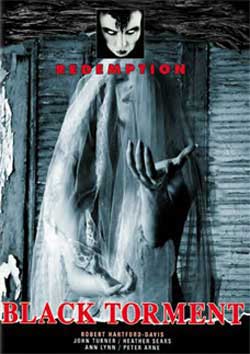 Upon returning home to his village Sir Richard Fordyke and his young wife Elizabeth learn many troubling things. You see a murderer is haunting the streets of the village, a murderer who does vile things to his female victims. Everyone seems shocked to find out that Richard doesn’t know anything about it, especially since the murderer looks and sounds just like him.

“Oh they’re full of wild talk of witchcraft and the devil…and witchcraft.”

According to folklore a doppelganger is a ghost of a being who takes the form of a living being. Robert Hartford-Davis’s 1964 ghost story The Black Torment is an example of a tale about a doppelganger that decides to haunt a young married couple.

Before The Black Torments credits can even roll we are treated to a scene of a rather busty woman running through the woods. The young girl is terrified for her life and for good reason, there is someone chasing her. Suddenly from out of the darkness comes the form of a man who grabs the young girl by her throat and begins to strangle her, cue the credits and away we go.

Sir Richard Fordyke and his young wife Elizabeth are returning to his home village in order for his father Sir Giles to meet her. On the way to the village Richard tells a little bit about his family history, most notably of course that his father, Sir Giles can’t speak and instead relies on sign language. When Elizabeth asks if Richard can communicate with his father he answers that he can’t but Lady Diane is more than able to; Lady Diane is of course the sister of Sir Richards’s first wife Lady Anne. As you can tell this is a period piece for England, very similar in vein to the Hammer films (but it does lack that certain charm that the Hammer films carried with them).

When the young couple arrives in the village however they are not greeted by smiles and hellos. The local blacksmith named John is out right stand offish to Richard when he sees him, with good reason. You see the young girl who was murdered before the credits started, word around the village is that Richard is the one who killed her.

After meeting with Sir Giles, who signs that he hopes that the young couple has many children, the group decides to go to their separate courters. While Elizabeth is being shown her courters she meets a young servant named Mary. Mary is in love and asks Elizabeth if she will talk to Sir Richard so that she can marry her love, the apprentice to the angry black smith mentioned above. Richard however learns about the ghastly murder of one Lucy Judd, a young girl he barely knew. Lucy was savagely attacked, raped and murdered, but still alive when she was found. The last words out of Lucy’s mouth were “Sir Richard Fordyke”, so now Richard knows why the town was being so distant. Richard quickly informs the servant that Elizabeth is to have no knowledge of this; he doesn’t want her frightened of her new home already.

While having dinner that night the group calmly sits around the table talking amongst themselves when suddenly Elizabeth holds up a note that was delivered to her. Elizabeth seems a bit confused by the note, as it is written in Latin and she has no knowledge of the language. When Richard reads the note he becomes angered and storms out of the dining room.

Elizabeth of course chases after her husband to find out why he stormed out in the manner he did. He informs her that the note is actually his family motto. There is however an evil twist to her receiving the motto in the way she did, you see Richards first wife Anne thought that the families motto meant that Richard and Giles would come to hate her, as she couldn’t bear children, so she decided to throw herself out of one of the windows in the house (known as Fordyke of course). When they found Anne’s body she had the note tightly grasp inside her hand. Richard turns to Elizabeth and informs her that their dinner was interrupted by her receiving a suicide note.

As the young lovers go to bed that night they are suddenly awakened by a loud banging sound. Richard stands up to glance out of the window to see what is making the noise when he suddenly sees a lady in white out in the courtyard. Elizabeth begins speaking to Richard who turns towards his wife, he then turns back and the ghostly figure is now gone. Elizabeth assures him that he only saw a statue and that it was a trick of light, but Richard informs her the window that was banging was in fact the window that Anne jumped out of when she committed suicide. On his way towards his dead wives room Richard runs into one of the many servants of Fordyke who informs him that the said window opens every night. Richard demands that the door be barred close, forever.

The next scene shows the young servant Mary and her apprentice boyfriend. They are kissing and discussing the murders that have been occurring (why did we only see one?). They of course are very sweet with each other when young Mary informs the apprentice that she has to go. The apprentice of course doesn’t want his woman to leave so he tries to convince her to say, she isn’t budging however and soon the apprentice leaves. Once he leaves Mary looks towards the shadows and asks “How long have you been here?” no sooner are the words out of her mouth than a pair of hands around her throat choking the life out of her.

It is on the next day that Richard begins to learn more about his doppelganger. The servants go to fetch the horses for Richard and Elizabeth and Richard is angered when he finds that his horse Prince cannot be rode. The reason Prince cannot be rode is because someone is out riding the horse every night, someone who everyone thinks is him. While all of this is being discussed a saddle smith named Jenkins steps up to inform Richard that the saddle he had ordered is ready. Richard is of course confused, he has been over a hundred miles away there is no possible way that he ordered such a saddle. Jenkins however is convinced it was Richard who ordered it and on Elizabeth’s request he decides to look at the craftsmanship. He is pleased with the craftsman ship and offers the saddle to Elizabeth as a present. Elizabeth smiles at the gesture but soon that smile is turned into a scowl as she whips out at Richard with her riding crop. The reason for Elizabeth’s anger, the name Anne is engraved on the side of the saddle.

After the young couple returns home Richard is visited by his old friend Col. Wentworth. Col. Wentworth has a lot of news for Richard. The main news is that Jenkins isn’t the only one who has claimed to have seen Richard during his absence from the village. Villagers have reported to Col. Wentworth the strange sight of Richard riding on his horse at night with the ghost of Lady Anne following behind screaming “murderer”. Richard assures Col. Wentworth that the rumors and stories aren’t true and the two agree that they aren’t while they are discussing this however Mary’s boyfriend, the young apprentice shows up and he is very angry. He says himself the same story that Col. Wentworth just told, all in a blind and angry rage. Who is committing these murders in the small village? Why is the ghost of Anne haunting Sir Richard so? Was Lady Anne really murdered by Sir Richard?
The Black Torment is an older film from an era when scary movies were made to actually scare the viewers, not repulse or sicken them. For fans of modern fare The Black Torment will seem slow and boring, and there really isn’t any blood in the film to speak of so no gore for all of the gore hounds.

The Black Torment however is a wonderful costumed period piece. The sets and the costumes of the characters are quite good, the lighting and music however are not and tend to make the slower moments in the film seem slower than they should be. I do recommend The Black Torment to fans of British horror from the late 1960’s to early 70’s, there is everything fans of this era would come to expect. The chilling ghost story even has quite a few of legitimate scares, for instance when Lady Diane and Lady Elizabeth are suddenly attacked on the staircase by Sir Giles wheel chair.
Did I also mention that the last twenty minutes ooze with eeriness only to climax in a sword fight!

The Black Torment is the perfect film to watch on a dark gloomy night when you are in the mood for an old fashion ghost story.