Paul Gmitter is an amazing character actor. Paul stayed in character to do an interview with Horrornews.net as Isaac. He does an incredible job. You may have seen him creepily lurking around conventions as Isaac, The Joker or Freddy Krueger. He completely stays in-character and does such a great job.

What are you working on right now?

The thing is that I’m a character actor. I do voice-over work and so forth. When I’m Isaac, this is the original character of Isaac. Then sometimes I do Freddy, “Freddy’s Back!”  (Does a spot-on Freddy Krueger.) Then sometimes when I’m The Joker, I can talk like this. (Again, does a spot-on JOKER!)  I can change my voice. So the thing is that I enjoy it, I am not only a character actor for the patrons but I am a character actor for the vendors too. We are hoping that because I believe in this character that one day we’ll be able to make a movie. It takes a little time. We’ll see how everything works out. Isaac sticks in your mind. It can be a little creepy but not too creepy.

I think it’s great. You do an excellent job.

What do you think of the Horror Sideshow Market so far?

I like the Horror Sideshow Market. I’ve been to a lot of different events. I’ve been on the East coast at events like Monster Mania. I want to one day go to Texas Frightmare but I think my next venue I will be at the New Jersey Horror convention.

What’s next after that?

Sometimes I go with the flow. It depends, people call me to scare people too. 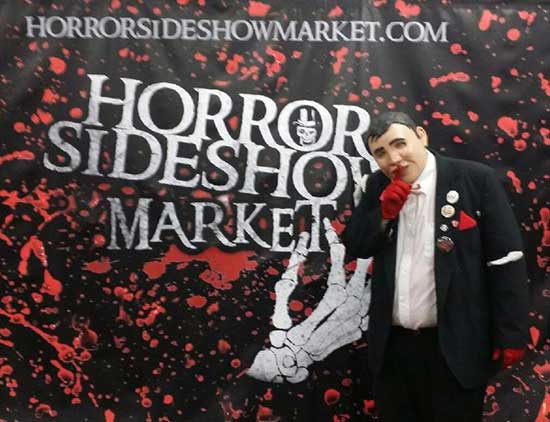 What do you want to say to the Horror community/Horror family?

Well, if you haven’t been to a Horror convention absolutely come to one and if you don’t know who Isaac is? Just look under your bed and I’ll say HI! See you soon!