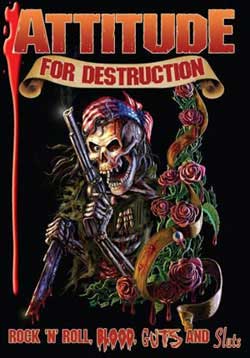 A rock horror film; an epic tale of Sunset Strip-era metal, murder and mayhem. The GUNS N’ ROSES-esque band HOLLYWOOD ROSES, fronted by vocalist DRAKE, is on the verge of super-stardom and courting a major record deal with Diamond Star Records. One small problem – the label doesn’t want Drake in the band. So, the remaining band members do what any fame-hungry performer would do – they kill Drake. But Drake’s girlfriend has made a pact with the devil and brings her deceased lover back from the dead. Drake then goes on a slashing spree of blood and guts against all who have crossed him, leaving behind a horrific trail of gruesome gory revenge

I have to say that this is probably one of the worst horror movies I have ever seen! It has a Guns N Roses cover band named Hollywood Roses that are playing at a club night after night. So Drake the Axl wanna be’s girlfriend Crystal has a Record Producer come out to check them out while they are playing a gig. Well J.J. likes what he sees but isn’t too thrilled with Drake. He decides they would like to sign them as long as they ditch the singer Drake. So can these guys sign the contract without a guilty conscious?

Damn straight they can! They all go meet with J.J and sit on that leather couch with big sh*t eating grins on their faces with a pen poised in hand. The only one that feels any wrong at what their doing is Mark. But that only lasts for a nano second and he signs his John Hanc**k on the contract. Well the guys all meet up at the studio to practice and they finally break the bad news to Drake and he flips the f*ck out. Can you blame him? Wouldn’t you feel betrayed if it happened to you?

After throwing all of the instruments around the room he really gets into it with Mark who just so happened to be the only one ballsy enough to tell him what they all just did. He grips him and chokes him so Cosmo the drummer jumps in and then they all f*ck him up until he dies bloody and beaten. Crystal is not just some groupie chick she has a dark hidden secret that no one knows, she worships Satan in her free time and has given him many sacrifices hoping for something in return.

So now the band has been touring, partying and Mark has been screwing Crystal who says she doesn’t want to lose him like she has lost Drake. One night she doesn’t show up and Mark swears she is out messing around so they get into a huge fight and he boots her out. He goes to bed and wakes up with another nightmare that has been visiting him nightly and causes him to wake up in a cold sweat. He dreams that Drake has come back from the dead and is going to kill him and the other guys.

Mark tries to warn the other guys that things just ain’t right and Drake is coming to get them all. They laugh at him and basically tell him he is a big wuss that needs to get a grip. Most of the movie is them playing at clubs but it’s flat out boring and makes you want to press the fast forward button in the worst freakin way! Even when Drake comes back from the dead to kill them is just as stupid. I couldn’t tell anyone that I enjoyed this film because I would be flat out lying.

I really hate to totally rip a film like this but it is seriously a waste of time that you’ll never get back. You should probably rent or buy something else that you’ll have better luck with. I don’t even think a Guns N Roses fan could sit thru it. They don’t really play their hits, they just sorta look like them- well two of the them do anyway. The drummer Cosmo runs around with this bad wig on, I mean you obviously see that it’s a wig and a sucky one at that. I mean if you wanna watch a horrible flick then Attitude for Destruction is for you.