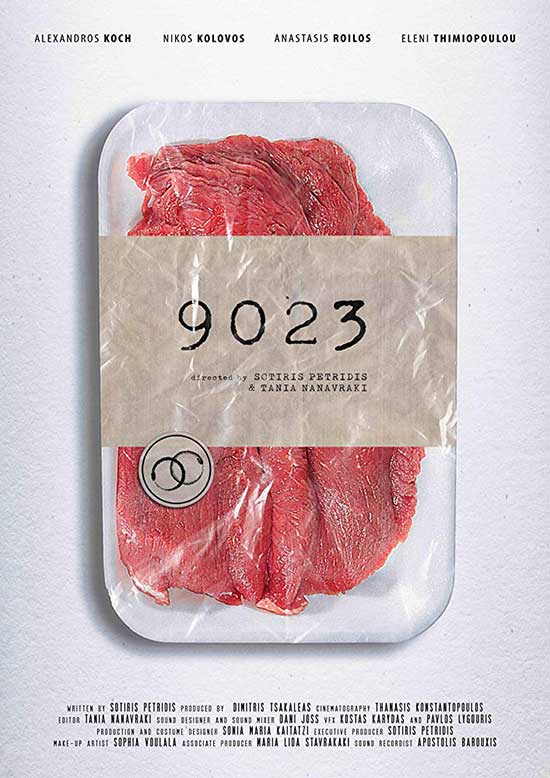 Because of a severe famine that affects the whole country, the government is allowing non-productive citizens to be eaten.

I was confused by the title at first, thinking the file I was sent didn’t have the film name attached. It turns out the title is important. It refers to something in the film called Act 9023, which was passed as a way to handle the affects of a severe famine.

I’m getting ahead of myself, though.

So yes, there has been an extreme famine, apparently due to an economic crash that has lasted decades. Resources are thin and action had to be sought to handle the problem. While extreme, Act 9023 will solve the problem of both too few resources and too many mouths to feed.

Our story opens with a man (Alexandros Koch) watching a news program. The news program features an interview with the Prime Minister (Nikos Kolovos) explaining the details of this new law and how it will work.

The news presenter (Anastasis Roilos) challenges the Minister on many points of this new law, questioning its ethics. But the Minister is calm and states his case matter-of-factly.

I can’t help but feel there is a definite political and social commentary being made here, perhaps in response to the austerity measures taken a few years ago in Greece. I know many in the country were unhappy with the choices that were made to deal with their economic issues, so perhaps this film is a commentary and/or satire addressing that problem.

The cast and crew have a reasonable amount of experience, mostly in productions from Greece and nothing with which I am personally familiar. Their credits all overlap, though, and many of them have worked (or will be working) on projects together. This film has won two festival awards, including a nomination for Best Horror at the San Diego Comic-Con International Film Festival.