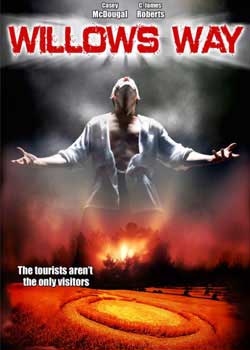 Grieving over the death of his son, Jacob Lazar (C. James Roberts) connects with an alien visitor stranded on Earth. But Jacob tests their bond when he seizes the being’s magical staff with the intent of traveling back in time and saving his son’s life. This very act changes the alien’s assessment of mankind’s motivations and forces Jacob to choose between bringing back his son and saving humanity’s future.

Time travel, alien encounters, and a desire to avenge a son’s murder fuels the film Willows Way. Kevin DiBacco’s Sci-Fi/Thriller gives a second chance to a father who just wants to right his wrongs of the day that his son was killed. The film jumps around from the present to past in ways that if the viewer doesn’t pay close enough attention, the movie could be one big whirlwind of disappointment and confusion.

Willows Way starts in the countryside, where Jacob(C. James Roberts) is digging up a grave. Jacob, as referred to by friends as Jake, is surrounded with fiery explosions and smoke arising from every direction. In the background, there is a male dressed in a black robe with a silver staff and silver headband following Jake’s every move. When Jake runs into the cabin, he grabs the staff of the man while expressing discontent with his life. He is transported into a time transport, in which there is flashing white bars and background of outer space.

The film then is shown three hours earlier, where TV reporter Sully(Dan McCready) is announcing the verdict of a trial of a previously convicted sex offender, Albert Crawford. He was found not guilty of the murder of Jake’s son, and visual from the releasing of Jake and his sister-in-law Abigail(Casey McDougal) from the courthouse. Jake gets interviewed by reporters, as Abigail talks to her good friend Dominic. Jake is then shown at home, sulking at the loss of his son and wife, Abigail’s twin sister Annie. An earth shattering crash startles Jake, and images of a spaceship are shown spewing fluids and explosions are repeatedly shown. News spreads across town to news station in which Sully and Abigail are shown making their way to their Jeep. Dominic meets up with them, and they make their way to Jake’s cabin that in close vicinity of the crash site.

Meanwhile, Jake is shown searching his barn, and in comes Alleal(Karl Steudel) from the present holding a similar staff that was shown at the beginning of the movie. Jake is startled by the mysterious foreigner wearing casual clothes. The messenger, whom is the present form of his past self in black robe, tries to warn Jake that he is just trying to help make things right again. Jake is a startled by the messenger and grabs the staff. This is the portal in which he is sent to a year ago, a day before the date of the murder of his soon. Jake’s sister-in-law is shown driving Sully and Dominic to the cabin, and stop to speak with Abigail’s preacher/father(Bill Humphreys). Her father encourages them to attend the emergency town gathering at the church, but they still go out to Jake’s. After not finding Jake, they return to the church where the citizens are confused by the state of the city. After more explosions, it seems that the city is decimated from the exploding spaceship.

In the past, Jake is watching his actions of his past self. He goes over to Crawford’s home, and holds him at gunpoint and shoots. Alleal enters the scene, and bring Crawford back to life. Jake takes off, while Alleal deals with his past self with a fight with staffs. Jake encounters his past self, and after a skirmish he is sent to a campfire scene with Alleal. Alleal explains that he is himself from the present, and the black robed character is he from the past. Jake distraught to change the past pleads with the male to somehow change the past so that he can have his son back. The messenger tells him no, and that he must only change how he dealt with the messenger to save the city from destruction.

The film was confusing, in a plot that jumped from present to past back to present in ways that mixed with a storyline that did not make much sense why Jake was digging up the grave to “fix things” and the ending is a bigger letdown in that Jake is not shown achieving any kind of goal and the city not being destroyed. The visual effects were all CGI animated, and were abundant throughout the film. Some of the actors tended to deliver their lines poorly, and looked as if they were staring into space reading cue cards with their lines on them.

DiBacco’s Willow’s Way is a Sci-Fi/Thriller that is difficult to follow, but elaborates on a tale of a broken-hearted father attempting to revive the life of his murdered son. With time travel and alien encounters, Willows Way is driven by twists and turns that ask the viewer to pay close attention or their minds may wander and get lost in time themselves!

Note: This movie is now available as part of the 4 pack “Alien Fear Collection” from Mill Creek Entertainment