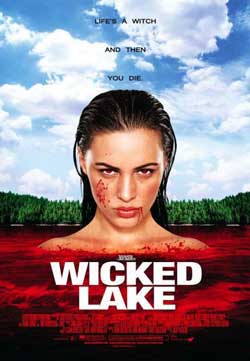 Four beautiful coeds retreat to a mountain lake for some weekend R&R, but their holiday is shattered when four creepy admirers show up at their cabin. But when the clock strikes midnight, a mysterious power is unleashed that surprises everyone. Now it’s up to the uninvited guests to fight for their survival from the bloodthirsty beauties. Zach Passero directs this fun frightfest starring Carlee Baker, Eryn Joslyn, Eve Mauro and Robin Sydney.

Okay I will get right to the point I really don’t get the point of this movie. Maybe it is a secret I am not let into on. The story almost seems like it can develop into something at the beginning when Caleb (Marc Senter, awkward past the point of painful) tries to flirt with Ilene (Robin Sydney) who was a naked model in his art class. The two performers have chemistry but the scene becomes pointless ending with him wanting to touch her breast and running away in what seems like 5 minutes of film time. Did we need to see every second of his awkward run? He goes home to be punished for being late by his brothers.

Four beautiful women live together and have sex in lighting that makes them look like goddesses to middle eastern music. Not having enough sex in their lovely house they decide to take a vacation down to a cabin in the woods by a lake. Clearly they need relaxing after all that Zen sex. The women pretty much blend together and don’t really have very clear characters. They are lovely to look at, but other than Ilene who had least at that first scene and is blonde I have no idea who is who. I know they all love being naked and kissing and dancing to rock music.

Somehow Caleb and family find the girl at the cabin. How they did this as they have no brain cells to rub together we don’t know, but somehow they did. One of Caleb’s brothers punch him in the mouth as he didn’t tell them that one of the girls was a nude model. She kisses Caleb for the blood. They bring in more of the family and pull a knife on the women. At this point I really think the women could have kicked their asses but okay they are afraid of the knife.

They torment the girls until the girls try to fight back. Caleb is impaled on a door but it really doesn’t seem to do any permanent damage, he just hangs there through out the whole movie. Now the bad guys have a gun as well as the dangerous knife. As each woman gets tormented the other girls seem very disinterested in it like another better movie is running off the set. IIene escapes and is killed as she is laughing that soon things will be different.

Meanwhile two cops (Tim Thomerson and Michael Esparza), an experienced veteran and a rookie (who’s father worked with the veteran before) trade stereotypical dialogue They find some signs of magic and a dead body. One of the girls are forced to give a blow job to the “war veteran” and bites what is left of it his c**k off and runs out door. Clearly they haven’t gotten better at guarding the door. And at midnight she starts roaring as do the other girls and now the bad guys are afraid due to the change of behavior, not that the girls have done anything yet. There is nothing scarier than women who roar. I guess Helen Reddy scared them to death. Then the backwoods men from the store show up too, but then get told to leave and then one of the women appears out side naked, of course. She bites one killing him and lets the other one go.

IIene comes back animal like, but is said to be too badly damaged. They attack and eat and suck out some of the blood and brain matter and kill one of the bad guys (don’t ask me for a name I am protecting the guilty). They have to burn IIene to allow her to return. They eat the arms and the legs off the war veteran (Frank Birney) and finish him off. Then they go after the leader of the family and push a rubber c**k down his throat and kill him by eating him.

The police veteran is pulled inside and thrown back out to die with his partner. The rookie is forced to face the women alone. He sees that one of the victim’s head has been microwaved. Now it’s a fight to the death between the cop and the women. Of course the women always come back so the odds are bad for the cop.

*The scene with the rookie’s flashlight going on and off and one of the girls appearing behind him every other time. Okay, that’s spooky.

*The weird first scene with IIene and Caleb. There seemed like the movie had somewhere to go and I like Robin Sydney, too bad that’s the last real time she gets to do anything.

*The off beat music choices and yes there is a soundtrack out.

*The camera work is well done and there are no sound issues.

What I didn’t like about the movie:
*Do we need Caleb being alive after most of the credits and pulling himself down from the door?

*Somehow they made beautiful naked women boring. I mean other than Showgirls what kind of evil movie does that?

*The script. I mean should this be funny? Should I take this serious? What the heck is the tone of this movie because it never really comes through.

*The “surprise ending, was anyone surprised?

Writing about this movie makes it sound like more fun than it was to watch. This movie had more money than a lot of the films I write about and used it for good lighting and good sound but the story needs to go back to the drawing board. And all the actresses deserve a better movie for their talents. I give it one and half stars and it will keep me up all nigh asking why? The DVD can be found on Amazon.com