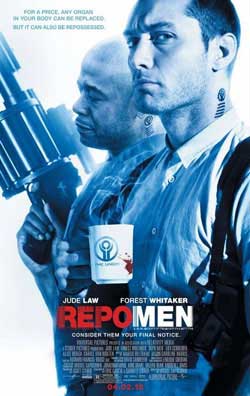 In the future humans have extended and improved our lives through highly sophisticated and expensive mechanical organs created by a company called “The Union”. The dark side of these medical breakthroughs is that if you don’t pay your bill, “The Union” sends its highly skilled repo men to take back its property… with no concern for your comfort or survival. Former soldier Remy is one of the best organ repo men in the business.

But when he suffers a cardiac failure on the job, he awakens to find himself fitted with the company’s top-of-the-line heart-replacement… as well as a hefty debt. But a side effect of the procedure is that his heart’s no longer in the job. When he can’t make the payments, The Union sends its toughest enforcer, Remy’s former partner Jake, to track him down

I am quite a big fan of Repo!..The Genetic Opera, so I was prone to boycotting Repo Men entirely, but being that far and away above all else I am a fan of all things horror I put my objections aside and went to see it. Turns out that I liked it, quite a bit.

Set in the not too distant future a large, heartless corporation – The Union – has developed synthetic human organs and has begun financing transplants of all sorts. For those that sign up for one of these “artiforgs” yet have fall into arrears, after 90 days they are subject to a visit from a repo man, who, with little concern for your living after the act of repossession, will reclaim your organs. (I know anyone who has seen Repo! is riled up with the similarities, I was too, but it does diverge into it’s own story at some point – I promise).

A top pair of repo men Remy (Jude Law) and Jake (Forest Whitaker) go about this unsavory job with some apparent enjoyment and quite a bit of skill. At one point Remy, who juggles being really good at his dark job with having a wife and young child wanting to live an understandably clean, suburban life, has an on the job accident necessitating a heart transplant. With a sudden zest for life but still haunted by the pull of his shiny white suburban life he decides to go rogue and try to beat the system once his new heart becomes subject to repossession. Of course it is his former partner Jake who lands this particular repossession job and a fairly fun, bloody game of cat and mouse runs through the rest of the film until the somewhat surprising ending.

Along the way we get to see just a hint of how the gruesome job of organ repo will effect the psyche of the man and ripple unhappily through family life. I think there could have been a fuller picture of that part of the story only getting a small glimpse of the negativity that can come from ripping into people for a living. Even though there is a lot of juxtaposition between the shiny happiness of the suburban family life and grey blue of the down trodden ghettos there wasn’t really anything that made one life seem better than the other in this movie. In fact most of the interesting, kinder people are the ones living in squalor under the assumption that they are in hiding with past due artiforgs but they don’t seem any less unhappy than the overly gadgeted, barbecuing suburbanites who presumably are fake organ free or have kept up to date on their ridiculously over priced transplants.

The film did a less than stellar job at convincing us that living a somewhat dull, debt free life is better than hanging out with all the cool debtors in the bad part of town. (And on a totally random side note I must say that I am not the only person who found the fake eyelashes of Remy’s wife Carol, played by Carice van Houten, more unsettling than the fake eyes of other characters).

The only other thing that I found inherently wrong with the film is that before it was released there was talk that it was meant to be a musical. Whether this was true and changed due to far too glaring comparison with Repo! or not I do have no idea, but it was hinted at through out the film. There were several instances in which music, mostly old standards and easily listening classics, was blared at us to emphasis some point or another.

It was meant to tie into the original title of the film and something Remy says at one point about “The Repossession Mambo” – referring to the twitchy dying of someone who has just gone through organ repossession. If the music had been original pieces it might have slid better into the film but often it was just an annoyance. Worse still was the scene in which we first see female lead Beth (Alice Braga) crooning away as a supposedly seductive lounge chanteuse. While not dreadful with the performance she is just not believable as a sultry singer, lacking a serious amount of on screen charisma for that particular role, her musical interlude was cringe worthy and unnecessary at best.

There were some highlights to the film, such as the acting of Forest Whitaker, who made the character Jake a lovable jerk and made the job of organ repo actually seem like a lot of fun. Also enjoyable was the pace of one uppmanship with Remy and Beth artfully and often bloodily escaping their impending repossessions. At some point the film switches from a dreary comment about the future to a plain old fun, blood and guts action movie. Culminating in an ending that left me feeling both unsatisfied and fulfilled, but still fairly happy with my movie going experience for the night.

Though there are a few instances in which fans of Repo! will want to cry foul on the creators of Repo Men, rather than being a rip off or imitation I think that this film heralds a new concept in sci fi and horror films which was established with Repo! Just like the 80’s and 90’s brought us a plethora of movies with the idea that someday technology is going to become self aware and fight back, or prisoners of the future are going to be subject to death races in an effort to gain freedom, this new millenia is going to bring us the idea that our bodies, like everything else, are subject to the tribulations of credit and economic down turn. We will probably see a lot more of the idea in various forms now that it is out there, Repo! will remain the best but I look forward to seeing what other film makers will do with the concept.