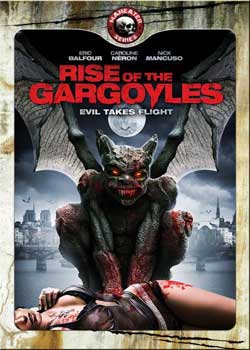 Eric Balfour stars as a professor who may be the world’s last hope for redemption on Judgment Day. Evil creatures have been imprisoned under an abandoned church in Paris, but they are now freed from their cages and can wreak havoc on humanity. The fate of men and women around the world depend on a small group of people’s ability to fight the dark forces.

Historical buildings, like churches, pay homage to stories of superstition and mythical creatures through intricate paintings and sculptures. Even those the artwork was something done hundreds to thousands of years ago, stories of mythical creatures live on through books, spoken word, and even movies. In Bill Corcoran’s Rise of the Gargoyles, a classic tale of gargoyles attacking people comes to light in present day civilization.

Jack (Eric Balfour) is a college professor with a knack for mythical creatures in architecture that only seems of interest to him. His colleague Carol (Tanya Clarke) is portrayed as his only close friend within his new career in a college in Paris, France. Jack is recently divorced, and speaks a little about how his kids are back home in U.S.A. Carol surprises Jack back telling him she had something special to show him, and it is something to do with old style architecture.

Carol leads Jack over to an old abandoned church built on top of an old being torn down, and tells Jack that supposedly two construction workers were killed and they had ceased destruction. Jack is jumpy at first, but Carol’s reassuring words of how amazing the inside is leads them into the church. They see beautiful murals and golden gargoyles that awe them in beauty. They make it to the old sanctuary, and Jack goes further to take better pictures. Carol makes her way to a table that has what appear to be eggs on them, and she takes them and stuffs them in her bag. While Carol is squandering the treasures, Jack jumps as the door begins to rattle, breaks his video camera, and yells at Carol to run.

After fleeing the church, the madness ensues when they see a body come from the sky landing on Jack’s car. Jack and Carol part ways, but Carol is stalked by one of the creatures from the church. While chasing her through her apartment, he follows her outside where he treats her to a swift kill by chopping her head off. Jack finds her bloody and dismembered corpse while vowing to figure out what came after Carol.

Jack returns to the church, and runs into Father Gable (Nick Mancuso). A delirious old priest, he claims the church used to be his and doesn’t want it torn down. Jack cannot information from him, so he decides to get a woman reporter who prides herself on tabloid footage to accompany him on his search. The female reporter, Nicole (Caroline Neron), is working alongside her witty cameraman Walsh (Justin Salinger). Walsh agrees to fix Jack’s camera, and after seeing the footage of a gargoyle they are convinced that these stone creatures are real. With help from Father Gable, the trio goes back to the church to defeat the gargoyles and find peace again from what was once deemed fictional.

The gargoyles in the movie were completely computer animated, and the kills got bloody but still had strong CGI elements. I was thoroughly disappointed with the appearance of the gargoyles; even though they looked huge and vicious, they were too animated for my eyes. The monsters were made from stone, no surprise, and of course the group had to develop a way to kill the inhuman creatures. The music composed for the movie was mostly organ, which gave the church a creepy feel that it deserved. The storyline is set over a two day span, which gives no real ability to utilize sympathy for the protagonist with him only blurting a few lines about his awful divorce.

Corcoran’s Rise of the Gargoyles does as the title says by showing a sudden awakening of fictional animals set in stone. From seeing these creatures being carved in stone, we traditionally are supposed to be scared by their vicious features. By making them into real monsters, we can see that one’s nightmare of what we thought was an inanimate object could in fact come true.

Tags Rise of the Gargoyles