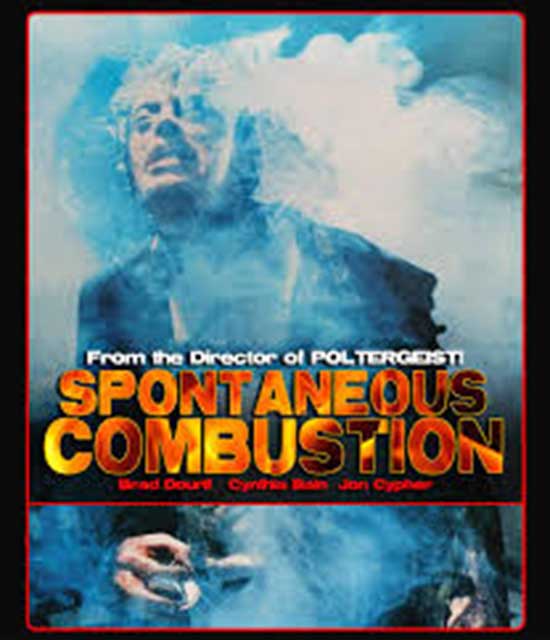 A young man finds out that his parents had been used in an atomic-weapons experiment shortly before he was born, and that the results have had some unexpected effects on him.

“I don’t believe in using too much graphic violence, although I’ve done it. It’s better to be suggestive and to allow the viewer to fill in the blanks in their minds.”

In my mind it is that devotion to subtlety and imagination that sets Tobe Hooper apart from many of the rest of his directing brethren in the bloodletting cinema set. Restraint from tossing the explicitly visceral toward the audience all of the time. Cajoling them, instead, into firing their own fertile minds as a way to engage and glue them to their seat, is the way to involve the moviegoer in the complete celluloid experience. Take a look at his seminal masterpiece, 1974’s The Texas Chainsaw Massacre. Almost in contradiction to the bluntness and brutality in the presentation of events is the remarkable lack of overt gore. Tearing of skin and spurting of blood is left much to the descriptively powerful mind’s eye of the viewer drinking it all in. It is this minimalist approach that the helmer reaches again for with the deliriously off-kilter gem from 1990, Spontaneous Combustion. 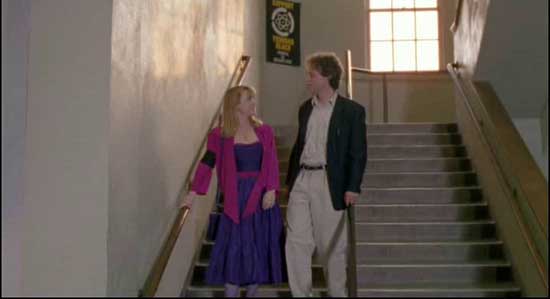 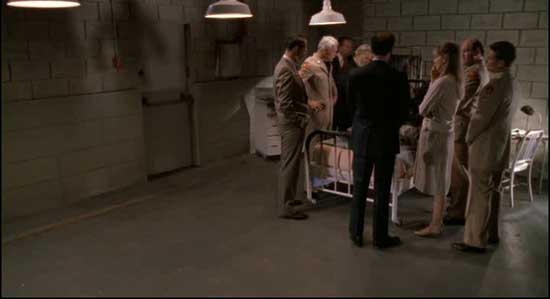 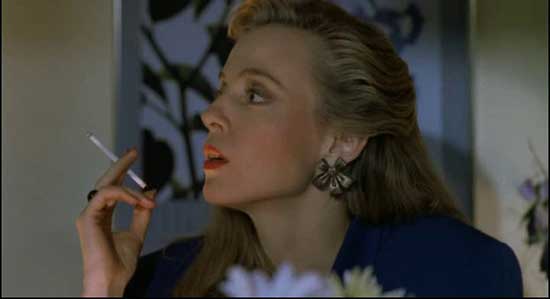 A young man named Sam discovers that, just prior to his birth, his parents were guinea pigs in a 1950s experiment that subjected them to an H-bomb explosion while testing a serum meant to protect them from exposure to radiation. Fast forward 34 years and our now grown hero comes to discover he has the power to set fires and cause others to burst into flames. As he seeks to discover the truth, he discovers a world of lies, horror and science gone fatally wrong and that he is a central pawn in a ploy to improve the human race.

The picture offers a rare sympathetic leading role for one of the screen’s best purveyors of mental imbalance, Brad Dourif. The guy whose chilling voice has emanated from the Good Guy Chucky doll for years in the Child’s Play series is the one here attempting to coax sympathy from the film fan for the plight of the tortured innocent Sam. An unusual choice for the key role yet it is a testament to the skill of both actor and director that this casting is pulled off flawlessly. Hooper, who wrote the story and screenplay (the first draft was written in three weeks, which exemplifies the maverick indie in him to a T) focuses the tale as much on Sam’s personal agony as his powers come to light and how they affect his relationship with his girlfriend Lisa as he does the death and destruction in Sam’s wake. Like Massacre, Hooper opts to mute the gore down as much as possible. While you see folks erupting into mini-bonfires there is little in the way of nausea-inducing moments. In fact, I found myself awed as opposed to ready to vomit more often than not. Case in point is a critical bit where a hole opens in Sam’s arm and flames erupt. Unnerving just a mite but I didn’t find myself ready to hurl at that moment. 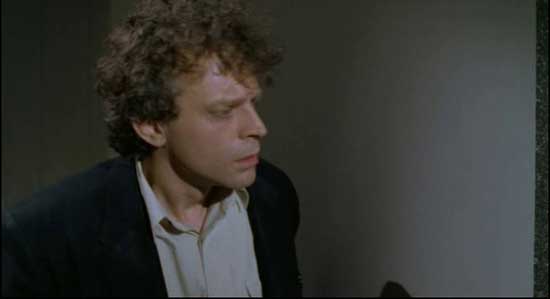 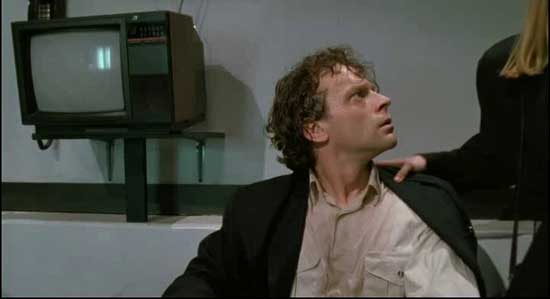 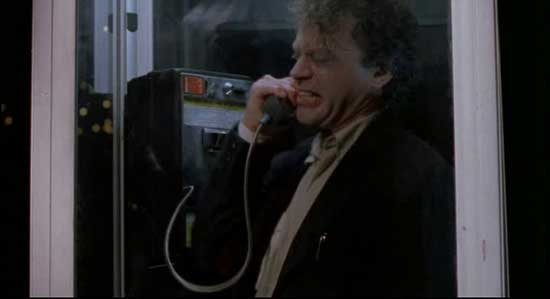 Hooper also shows a well-honed capability to present a finely-detailed sense of time and place in his films. The opening of this one, which takes place in a Nevada H-bomb testing site, evokes the heightened hysteria of atomic power even in it’s limited budget and setting. Of course, the blown dry hair and Miami Vice-look clothing on vivid display as the setting shifts from 1956 to 1990 provides for an uneasy transition but, again, it appropriately embodies the period.

Dourif shows a mastery here of using soft voice inflection to imbue his character with traits that help build an audience sentiment. His Sam is the nervous, rather milquetoast breed of human that would almost seem invisible to society if he didn’t announce his presence once in awhile. Credit the actor, also, for not resorting to unhinged psychosis as his abilities come to the fore.

If anything, Dourif has Sam becoming more scared and even resolute in not harming innocents. Aiding the star is a cast of veterans accustomed to the likes of this material. Jon Cypher has had a long history with sinister types and handles it here like a pro. William Prince steps in nicely as an elderly mentor/friend of Sam’s and a keeper of dark secrets himself. He draws from a lengthy career to be able to add an air of nastiness behind the veneer of a smile. Melinda Dillon, as the sympathetic nurse who assisted in Sam’s birth and is on hand to help him now, lends a polished combination of sadness, sympathy and doom in what is a rather remarkably brief screen time. Only Dey Young seems rather saddled with a thankless role of Sam’s friend Rachel. One of the film’s few drawbacks is an absolutely atrocious performance by co-star Cynthia Bain, who far too easily sinks to shrill one-note hysterics for much of her screentime as the girlfriend Lisa. It became something of an unintentional laugh distraction for the otherwise intense story. This discourse on the casting would not be complete if I did not mention some curious cameos likely designed by the director in a true sense of fun: Dick Butkus show up as a general and John Landis as a radio show producer in neat bits. Sharp-eyed viewers will spot former House of Wax director Andre De Toth in an uncredited bit as Vandenmeer early on. 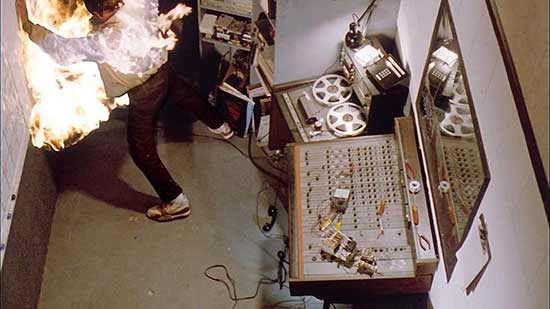 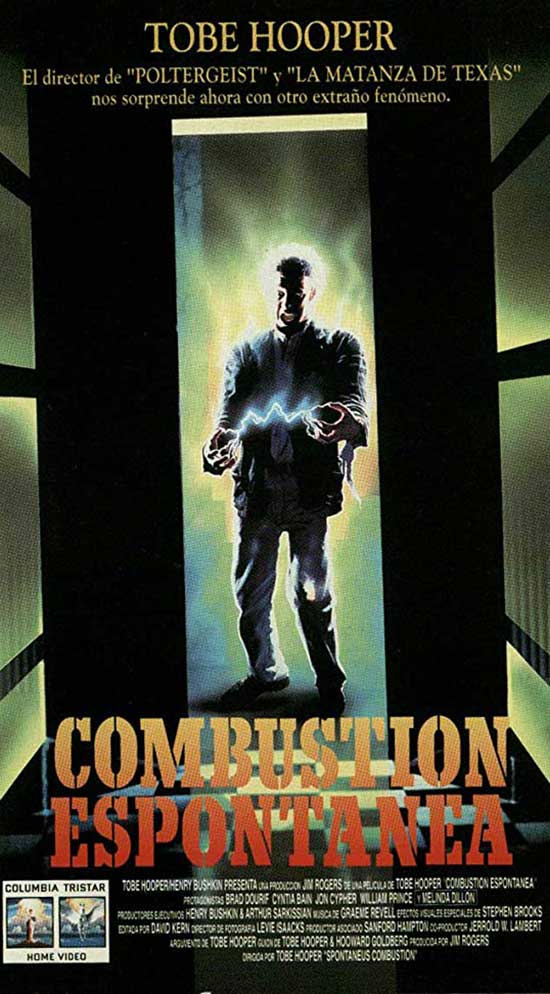 To be fair, there a few other minor debits due to the restraints of money that I usually concede as fun cheese elements in pieces like this. The rather obvious dummies that are inserted in the moments of a victim’s final flameout and some of the rather tatty electrical effects oddly give me a smile rather than a groan, perhaps chucking it off as part of the camp aspects to the whole affair. Kudos to special effects men Tony Hooper and Eric Lasher (as well as Stephen Brooks’s visual effects) for the realistic fire sequences, impressive considering the lack of funds they had to work with. And Graeme Revell lends his incredible skill for a kinetic, pulsating score to enhance the story. 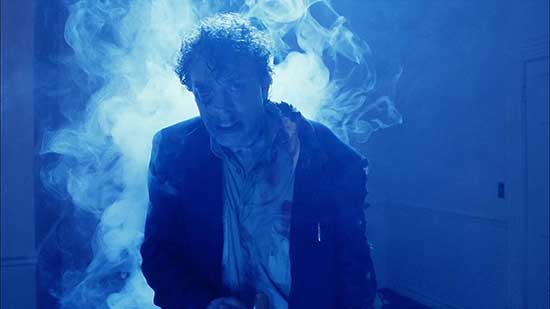 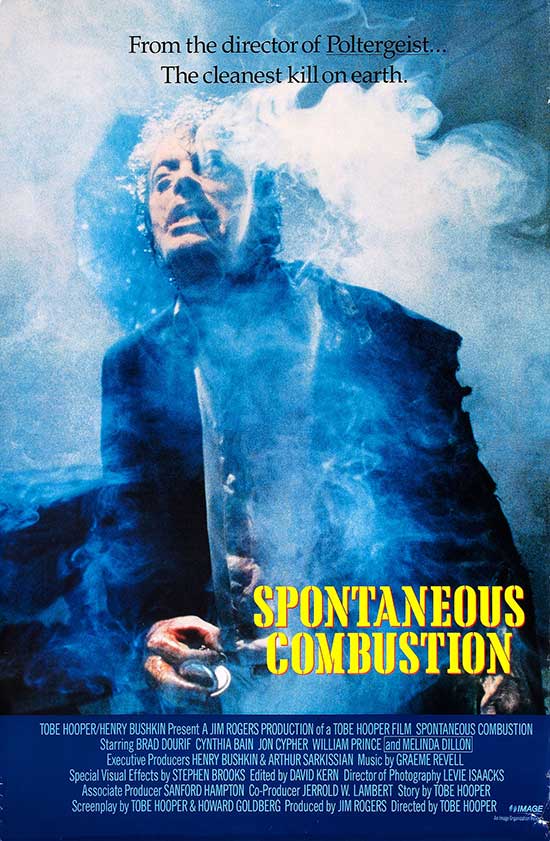 Really, if you are looking for that old school retreat to a time when substance was not bludgeoned to death by mammoth effects budgets, check out the spare, imagination-flaring genre fare that is Spontaneous Combustion. Just make sure you limber up your brain first because it will receive quite the workout. And Tobe Hooper wouldn’t have it any other way.