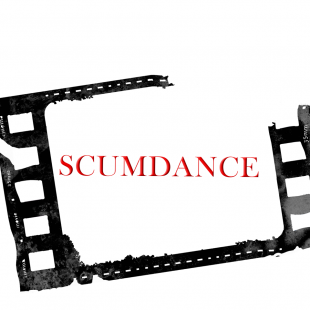 Third is the word. Three sheets to the wind. Three’s a crowd. Queer as a three dollar bill. The three Rs’- reading, writing, and rock-n-roll. You’ve heard it all, but you haven’t seen it all. That’s where Scumdance comes in. Now in its third year, Reno, Nevada’s Scumdance film festival features some of the finest underground movies around. Scumdance is proud to be part of Reno’s yearly held premier arts festival, Artown.

Scumdance Film Festival has opened its submission process for the 2019 festival season. They are in search of feature films and shorts in the following areas: Horror | Grindhouse | Splatter | Exploitation | Punk | Rock&Roll | Hot-Rod | Biker | Underground.

Scumdance is a one day film festival that takes place on July 13th, 2019. Genre filmmakers are encouraged to send in their most entertaining live-action, stop-motion, and animated films by the early-bird deadline of March 31, 2019.

In 2017 Scumdance featured: Black Cat, Hell!, and Red Christmas, with short films including Goddamn Sensitive Man, Shout at the Ground, Obsession, The Dark Hunger, Dead Fuck, My Ass Is Bleeding 2, The Last Movie, The Weed Whacker, Massacre, and The Gates of Hell.

In 2018 Scumdance featured: The God Inside My Ear, Fags in the Fast Lane, and Slave to the Grind, while short films included Puzzle, Oddness in Innards, Song of Hands, Third Wheel, Midnight in Her Eyes, Tazerton, The Old Stripper, Crude Picnic Drilling, Family Game Night, The Kvlt is Alive, The Jerry Show, Compulsion, Limit, Shagfoal, The Eve, Whimsy & Hester, Entropia, and Deadline.

“The festival was very fun and the organizers were welcoming. They were also quick to respond by email and were very personable. The judges gave thoughtful feedback to my work and I was lucky enough to win one of the awards. Overall I would highly recommend this festival to anyone who wanted to have a great time in a relaxed atmosphere watching weird and wonderful films.” – M.G. Mathisen

“Beyond being thrilled that our film Black Cat won a top award at the festival, everything else about the experience was excellent. 5 stars all around and I hope the festival continues to gain notoriety – there need to be more like it.” – Peter Pardini

Artown’s mission is to strengthen Reno’s arts industry, enhance our civic identity and national image, thereby creating a climate for the cultural and economic rebirth of our region. artown.org/