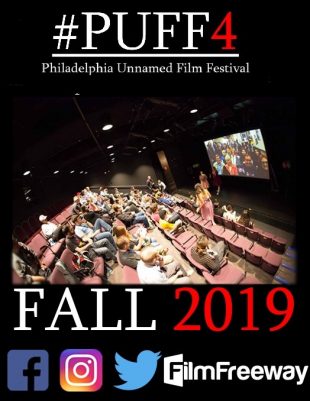 March 6th, Philadelphia, PA – PUFF returns to the dark heart of Philly this fall with their 4th annual celebration of the projects that not only defy film genres of science fiction, horror, underground, and more but usher new voices that will elevate the film festival experience as never before! PUFF4 is now accepting submissions on the world renowned FilmFreeway until mid-August. Feature, short and micro-short films are all being considered for the 4th annual festival to be held at the beautiful Proscenium Theater attached to the historic Drake Hotel in the center of Philadelphia.

Over the first three years, PUFF has previously featured such notable, award winning, and standard bearing feature films like Night of Something Strange, Karate Kill, Egomaniac, Tragedy Girls, Ruin Me, Imitation Girl, The Witch in the Window, Braid, Satan’s Slave, and The God Inside My Ear. PUFF has also been the home for such successful and festival gem short form programming as Chris McInroy’s Death Metal, Sam Wineman’s The Quiet Room, and Amelia Moses’s Undress Me.

PUFF was founded by Alex Gardner to bring unreleased genre films to the city of Philadelphia and connect upstart filmmakers with distribution outlets. Gardner is joined this year by local filmmakers Jill Trager and Brandon Tanczak of Jerks Productions, and Jay Kay of Horror Happens Radio.

“PUFF is excited to once again be working with Jerk Productions who have taken even bigger roles this year with the festival,” explained Gardner. “We are also excited for the addition of Jay who will help usher in a fresh beginning for the festival.”

This year PUFF is looking for more feature films and short form films to fill out the International, Bizarre, Genre, and Local programs that will showcase the diversity of gender, race, and creative influence as only PUFF can. Find out more about #PUFF4 at filmfreeway.com/PhiladelphiaUnnamedFilmFestival. More information is coming in Spring 2019! If you have any questions reach out to me Jay Kay at horrorhappenspr@gmail.com.