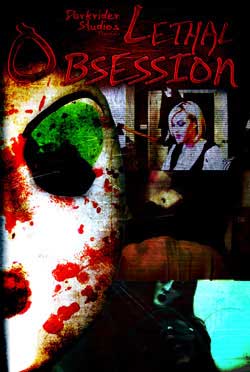 An otherwise quiet college community is turned upside down when a serial killer begins murdering beautiful women. The only apparent connection between the victims is their employer, Elizabeth Waters(Kitsie Duncan) owner of www.obsessioncams.com… a midwest fetish webcam site. What makes these killings particularly heinous is that they happen live while the women are performing on the site. The local authorities have never had to deal with deal with such premeditated gruesomeness. Only detective Dennett (Brad Mills), having left the crime ridden streets of Chicago, knows how to approach this case. However, his recent departure from a metropolitan precinct was due to his mental inability to continue dealing with mindless violence.

Webcams broadcast live over the internet 24 hours 7 days a week, bringing to the screen anything from family friendly chat sessions to naughty peep shows streaming to voyeurs willing to pay the cash to see willing performers. The ease of being able to view a willing object of sexual desire creates a lively fan following, and ease in complete immersion to what the site has to offer. In Chris Jay and Jason Hignite’s “Lethal Obsession,” a voyeuristic website becomes more than just a place to view eye candy, when one by one the webcam girls are picked off by a masked villain in women’s clothing.

“Lethal Obsession” jumps right into a woman speaking on the cell phone, getting ready for her webcam show. Memphis(Memphis Monroe) is well endowed, and gives the camera a quick peek of her plentiful chest. As Memphis readies herself for the show, the killer dressed in a black dress and heels emerges from the door quickly murdering Memphis. The killer’s features are hidden so that the gender is questionable, and the face is hidden by a long black wig and white doll face mask.

After the kill, an official investigation is conducted by Tony Dennett(Brad Mills), and other members of the police force.
The story continues with the introduction of roommates Brad O’Brien(Larry Mcatee) and Reed Antony (Austin Dossey), whose relationship is deteriorating due to Reed’s infatuation with a model named Gina on obsessioncams.com. Reed’s hermit-like behavior displeases Brad, and causes their friendship to be hassled. 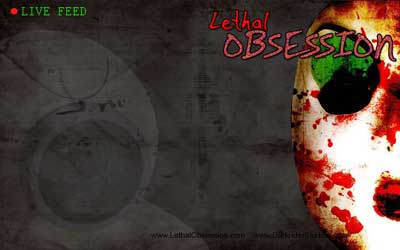 Detective Dennett is able to interview Tye, but he is cleared from being a suspect in the case with his blood-drenched head wound and dumbfound persona. As more webcam girls are murdered, Dennett is aided by members of the police force in finding any sort of clues that lead to the apprehension of the murderer. The number one suspect, Elizabeth Waters, uses her seductive behavior and glorious assets to sway the detective, but is unsuccessful in wooing the motivated Dennett. Brad and Reed are shown fighting progressively throughout the movie, but never reach a stalemate as they suddenly get wrapped up in the murder mystery that is plaguing the whole city. To make matters worse, the webcam girls being murdered continues as the killings become more and more brutal from a cheese grater penetration to a complete disembowelment.

Dennett must gather the clues and chose his suspects wisely to stop this killer of beautiful women. Interestingly enough, after viewing the movie, I was curious to see if obsessioncams.com was a real website, and in fact the viewer can access the website that shows the different girls that were preyed upon throughout the movie. The webcam girls were hard to emphasize with, due to their brief snapshots within the film. To add some depth into the film, it would have been interesting to see the different women perform for the camera their distinctive fetish that they show for the viewers.

There were small clues laying around that hint at what their fetish was, but could be easily missed by a casual viewer. The blood and gore was realistic and pleasing visually, as plenty of blood was shed after each webcam girl was murdered. The killer depicted a deep seated hatred to the girls, and savagely hunts down the girls due to hacking the system and stealing their addresses. The killer’s gender is hidden for most of the movie, and its voice is deep and almost indistinguishable that may have been a mistake in the rough cut in the film. 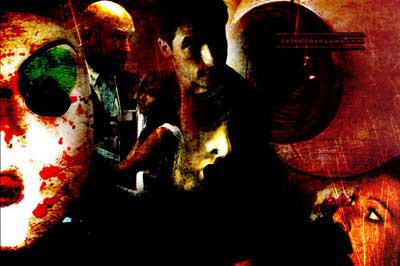 Another confusing aspect was Dennett’s character being from a bigger city moving to a small town, but not mentioned until reading the synopsis of the movie. It would be helpful to the viewer if a small clip of the horrors Dennett encountered dealing with crime in the big city that led him to being brought him to his new residence was portrayed. A lot of movies get stuck in back story, adding time to a movie that just drags, but adding a little here and there can help the viewer emphasize with the characters enough to feel interested in why they are being killed or why they do what they’re doing.

A whole town is the setting of a murderous rampage of tantalizing webcam girls in the blood drenched film, “Lethal Obsession.” The girls who chose to be viewed by voyeurs of internet sexual content become number one victims to a ravenous killer, who dresses in a gender obscure costume. The race to find the killer leads to a shocking conclusion, that reveals that one unhealthy obsession can lead to another in this sexually charged horror flick.