Film Review: Bloodbath in the House of Knives (2010) 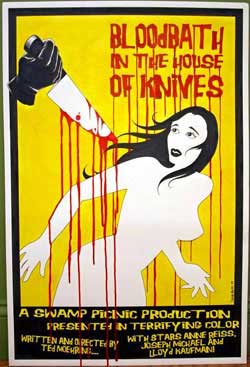 Deceit, long kept secrets, and grisly murders surrounded in mystery – all this and more can be found in Bloodbath in the House of Knives. What starts as a harmless visit to a hypnosis demonstration turns into a roller coaster ride filled with dead bodies that start to pile up around poor Ivy (Anne Reiss). What can be the true meaning of all this? Who would be capable of such crimes? Could it have anything to do with Ivy’s past relationship with sleazy p*rnographer and drug dealer Nick Lemenza (Damien Colletti) and the secret he’s been holding over her head? Maybe it has something to do with her sister Violet (Monica Moehring), and what really is their current relationship? What about the Hypnotist (John Link) who started this whole mess? Does he have something to do with it? What does her lawyer, Mr. Delgardo (Lloyd Kaufman) make of it all? Or will he soon end up in a body bag like so many others have? Join Ivy and her ever dwindling group of friends and family members as she realizes she is on a terrible journey that won’t end! Or, will it finally end but with her very own life? You’ll have to watch this action packed murder mystery chilling horror film thriller to find out!

The Italian born Giallo films enchanted fans of horror with a mixture of sexual provocative imagery and crime drama starting in the late 20th century by directors such as: Dario Argento, Lucio Fulci, and Mario Bava. Many filmmakers have been inspired by these films; not only by the colorful imagery, but the music that accompanied these films plague the viewer’s mind well after the film is over. Ted Moehring’s “Bloodbath in the House of Knives” is a 21st century venture back into the Giallo genre, with plenty of blood and a mysterious plot to entertain horror fans in today’s market.

“Bloodbath in the House of Knives” begins with Vivian(Nicola Fiore), coming home seductively dressed in a little black dress. As she pours a cold glass of milk, she hears noises around her house, and instantly believes it is just her boyfriend. This is not the case, in which she is attacked by a man wearing all black, and her throat is slit and she is stabbed repetitively between the legs.

After the disturbing knife penetration scene, an answering machine is brought into view with a message from a male with a creepily raspy voice. Ivy(Anne Reiss) is disgusted by the message, and answers a knock on the door from her sister Violet(Monica Moehring). Violet urges Ivy to come with her to a show at a bar, while being accompanied by their father. The show features a very eccentric hypnotist (John Link), who selects a member from the audience to put under a hypnotic trance. Things go awry when the volunteer under hypnosis staggers over to Ivy and Violet’s father, and starts to strangle him. Ivy and Violet panic, when they find out that this was not part of the show, and their father suffocates as a mysterious man shots the volunteer under submission.

The hypnotist is immediately taken into custody, and interviewed by the dashing Detective Bliss (Joseph Michael). He instantly sees the hypnotist as a likely suspect in the murder of Ivy and Violet’s father, and relays the message that a friend of the girls has been killed also. Afterwards, another one of Ivy’s friends is targeted by the killer, which starts becoming more suspicious to Detective Bliss. After fearing her safety, Ivy hires Attorney Delgado (Lloyd Kaufman) for liability purposes. Also, Ivy and Violet’s past blackmailer and owner of a bar, Nick(Damien Colletti) is brought into the picture as another prime suspect in the mix. The mysterious plot thickens after the hypnotist is taken into custody, and the killing spree does not end. Ivy unfortunately learns that she is more related to the killer than she thought, and the end is a shocking finish to the revelation of who the killer is and their motivations.

I found that the soundtrack of “Bloodbath in the House of Knives” was one of the major strengths of the movie. The music was both suspenseful and memorable as the Giallo movies of the 1970’s, and truly fit the theme of a mystery filled story. The killer adorned all black, and was questionable in gender as shown also within the Giallo genre. The killer also wore a gold mask, which added to hiding any kind of identity behind the mask. The killing scenes were filled with bloodshed, and sometimes gory, as one occasion rods were inserted underneath a female’s skin and then ripped out. The sounds of the knife slicing into victims were a little too emphasized, and could have been less audible.

I enjoyed the actor who played the hypnotist, John Link, who really put an extraordinary effort into his part. He reminded me of a male version of Edith Massey, who was made famous in the John Water’s films for her passion of giving her all into her character besides her unique appearance. Also, Lloyd Kaufman brought his signature delightful personality to the screen, as he played a cheerful yet humble lawyer that comforted the downtrodden Ivy.

Ted Moehring’s “Bloodbath in the House of Knives” is a must see for independent horror fans, and those who appreciate the Giallo genre within the world of horror films. The best part about Giallo films is how they keep you guessing until the end for the identity of the killer, and Moehring’s film is surprising in this nature.

Tags Bloodbath in the House of Knives