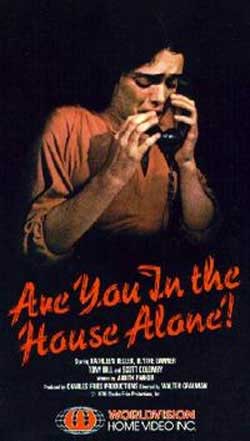 A teenage babysitter is stalked, harassed, prank called and sexually assaulted while on the job. It is up to her to come forth and turn in her assailant, before he attacks again.

This, Gore Hounds and Horror Maidens is what I call the “after school special/ Mystery/ Rape/ Revenge film of the eighties… and also the inspiration behind the Scream series. There are many subtle influences taken throughout the film, minus everything that makes Scream a rated R film… Such as Violence and Language. Of course, since I reveal no spoilers, you are going to have to watch (if you can find) this movie for yourself to see what I am talking about. The clues are there throughout the entire film.

In Scream, where Sydney thinks Randy is prank calling her from work and the killer says, “Are you alone in the house?”, Sydney says to him,”That’s so unoriginal, Randy, I’m disappointed in you.” was a major give away. I’m not saying that Scream is a rip-off or re-make of this film… Just brutally influenced by, besides the duo of killers… and murder itself. There is no killing… only Drama, Mystery and rape, with a legal way of revenge… that fails in the end. Actually, the film is based off of the novel by the Novel of the same name, by Richard Peck.

High School babysitter sweetheart, Gayle Osbourne is raped at the very beginning of the film in the house in which she is babysitting for. Then, then film goes to the beginning, at a lake house where Gayle’s stalking begins, in a Friday the Thirteenth style voyeur shot through the trees. Gayle is with her friend, Alison, as she hooks her up with a mutual friend. Later, Gayle gets together with Steve Pastorinas. She, Steve, Alison and her boyfriend, Philip Lawver, Become a foursome of grouping couples and friends. Later, Gayle starts to receive phone calls from a strange caller that breathes on the phone. The next day in school, she finds a letter in her locker that reads… I’m watching, You… Gayle shows it to her best friend, Alison. She tells her to blow it off. It’s just someone with a crush on her. Then The phone calls become a bit more menacing.

The voice tells Gayle, “I’m getting closer,” with a diabolical laugh. Could it be her Ex boyfriend, E.K Miller? Could it be the Photography Teacher that compliments on how sexy she is? At the same time, Gayle’s father has lost his job without letting her know, which causes arguments with his wife, Gayle’s mother. The father is driven to alcoholism as his daughter is stalked. The notes in her locker get worse and worse. Then, she finds a picture of herself with “Rape” written across her face. She then starts receiving phone calls at the household that she is babysitting for. “I’m getting closer….”, the voice taunts. On the night of the attack, the caller asks… “Are you in the house… alone?” He then makes his move on her as she babysits the sleeping children. What follows is a harrowing voyage to catch her stalker in the act, before he makes his move on another innocent Student, which he does. This time, Gayle is watching him. She has to return to school and face everyone after rumors have been flying of what happened to her. Most of all, something must be done to bring forth justice.

Over all, this is a good film for it’s time. It is horrific in it’s own creative and realistic sort of way. Without the use of gore, language, sex(besides the rape scene) or jump scares, the effectiveness is still there. Gayle is any high school boys’ dream… Sweet and pretty, which makes you really identify with her (I almost fell for her myself, growing up watching this film. It still holds up today, in my eyes) and feel her pain as well. The acting is decent for it’s time and of course, anything that ends in a down note is always a plus. FOUR HORNS UP. Check out this classic and rare jewel of a film if you can… Take notes, pay attention to detail and then watch Scream. You’ll see what I’m talking about.

Tags Are you in the House Alone