If you’re anything like me, you’ll have spent most of October gorging on horror flicks in the build up to the actual ‘most wonderful time of the year’. Comics have long snuggled up to movies, and whether it’s adaptations or spin offs, they often give iconic characters a rebirth from beyond the screen and onto the spinner rack (yes, let’s pretend they’re still a thing) So with half an eye on nostalgia, and both on some truly breath-taking art, here are some of the best movie to comic spin offs & adaptations you can find this Hallows Eve 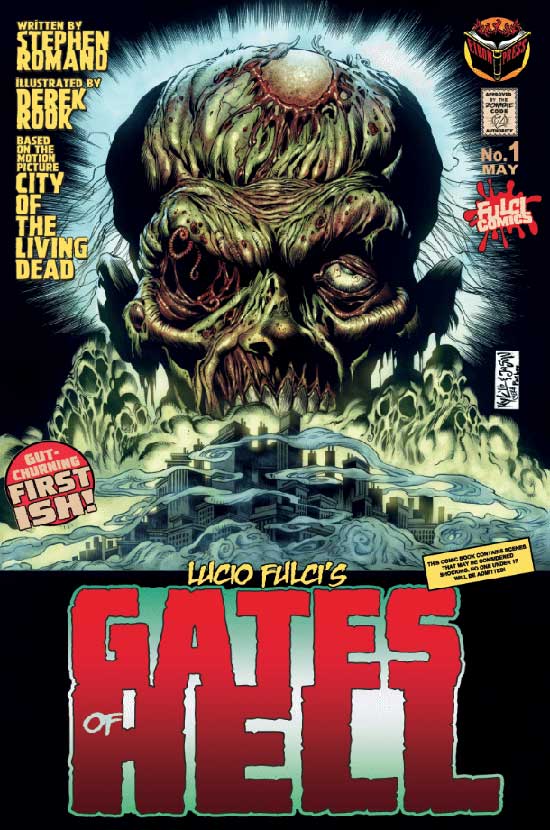 Eibon Press have made a name for themselves creating quality, collectible adaptations of Grindhouse horror classics. They have a particular focus on Lucio Fulci’s Saga of the 7 Gates, and started with a three issue adaptation of City of the Living Dead. Renamed as Gates of Hell to match it’s US release title, the book is a love letter to Fulci’s signature gore. Written by Eibon polymath Stephen Romano the script is not only faithful to the film but a smart expansion upon what are often quite sparse movie scripts. The art by Derek Rook is gloriously visceral and embraces everything we love about horror exploitation while quietly adding a spin that’s very much become a recognizable house style among Eibon fans. These are the books your inner fifteen year old horror nerd yearns for.

When Bernie Wrightson passed away in 2017, he left a body of work that could quite easily be considered the finest of any horror artist, comic or otherwise. If you like horror and you like comics then Wrightson is as ubiquitous to the genre as the scream or the jump scare. Paired with equal horror constant Steve Niles, the two adapted the original novel some years ago, and this four-part comic continues the story of the Monster. Haunted by his maker and trying to find his place in the world, he finds that the world just won’t let him be and is once again at the whims of deviant scientific pursuits and promises of something to call his own. This is a beautifully illustrated story that will leave you stumped as to how the hell Wrightson was able to conjure such artwork. For me this is the way I imagined the Monster when I read Mary Shelley’s novel, and for the myriad spin offs that come and pass without impact, this story captures the existential woe of the book better than anything else with the Frankenstein moniker. Sadly, it was unfinished at the time of Wrightson’s death, so chunks of part four are drawn by Kelley Jones, a great artist in his own right. This is one to keep on your coffee table and show off to your friends. The poor, misunderstood Monster is easily one of the most enduring characters in literature, and this comic stands as a fine example of how to carry on a legacy and elevate an art form. 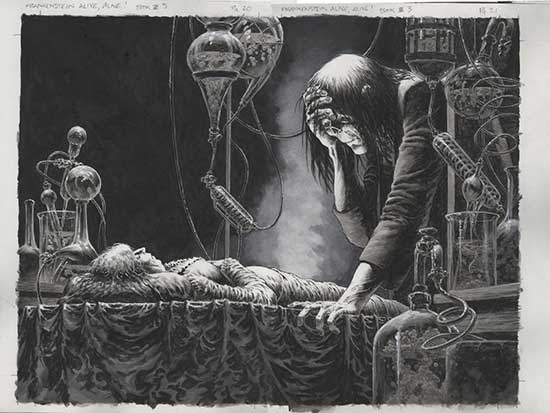 The 2014 movie of the same name was one of the most interesting vampire flicks in recent years. Packaged as extras to go alongside the Blu-ray release, this two issue comic serves as a prequel of sorts. Written by the film’s director and drawn by its storyboard artist, the comics are presented as flashbacks to the Girl’s life before she haunted the streets of Bad City. Like the film, the art is presented in stark black and white, with the Girl forming part of the shadows, always looming, just beyond the world she is fated to wander. Our way into this book is through an internal monologue where-in we get a little bit of her history, as well as some contemplative moments where she wrestles with her desire to exist at all. There’s not a huge amount to these books so consider them a garnish to the movie rather than a first course, but the addition of ‘the Girl’ to the comic page only enhances one of the most striking horror characters of recent years. Naturally read it alone… at night. 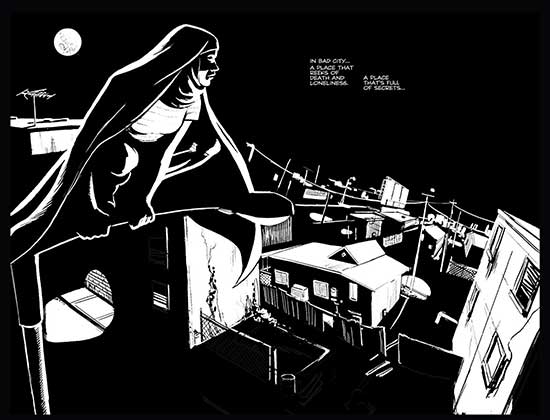 THE VAMPIRE LESTAT  – Based on the novel by Anne Rice, Adapted by Faye Perozich, Art by Daerick Gross, Published by Innovation Comics

In the early nineties, Innovation comics had a line of horror movie adaptations, being home to the likes of Freddy and Chucky. As much as I loved those books as a kid, they were pretty basic. This twelve issue adaptation of the classic vampire novel came out in 1990 and I bought a couple of issues but it largely went over my head, a little too sophisticated and cerebral a version of vampirism for a thirteen year old. The art however, remained seared into my personal comic history. Like many horror books of the early nineties, there is a certain aesthetic that defies convention, both paint and pencils, panel lay outs that dance around the page going from traditional grids to full paintings that just happen to have a speech bubble somewhere. The covers by renowned illustrator John Bolton are among the best you’ll find in any comic of any age or genre. This adaptation understands the complexities of the characters, with each panel beautifully capturing the tragic allure of becoming a creature of the night and has something to say about the hubris of all humans, undead or otherwise.  Every now and again you get your hands on something you coveted from youth and it’s all the better for the wait. Having recently acquired the whole set, The Vampire Lestat is one such prize. Seek it out. 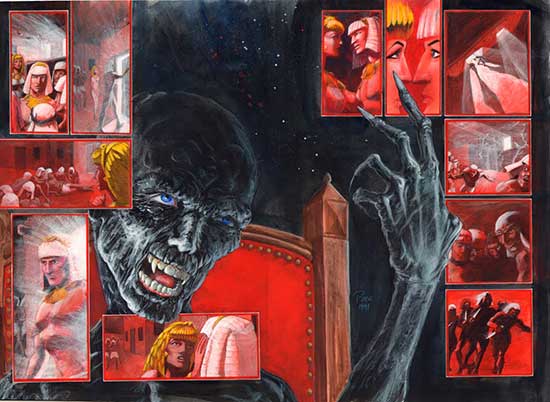 There’s some debate about whether Alien is a true horror film, but it ticks the primary genre defining box by being friggin’ terrifying so as far as I’m concerned that’ll do. There have been many comic spin offs over the years, but none have quite captured the isolation and helplessness inherent in the original film quite like Salvation. Created by two masters of the medium, the story follows Selkirk, a pious and humble crewman aboard the Nova Maru. Forced at gunpoint to abandon ship and crew mates by his psychotic captain, the two survivors find themselves stranded on an inhospitable planet that – you guessed it – has a certain xenomorphic flavour about it. The story is pretty basic and you may see a few of the twists coming, but the religious certainty of the central character brings about his own personal apocalypse when he realises that there is no salvation from the relentlessness of the Alien and that no amount of faith can combat something with a nature that fierce. One for the church book club. 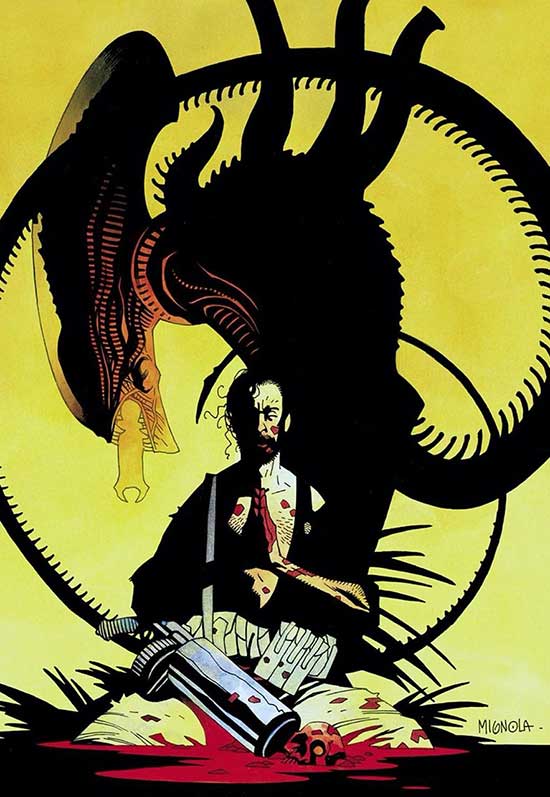 So this one is a bit of a cheat. There are countless Hellraiser and Nightbreed comics, and to be fair most of them are worth a read, but being a sucker for early nineties painted horror spin offs, I just couldn’t let this one go. Usually, property crossovers make me die inside, but as both of these were created by Clive Barker, this is one of the few that makes sense. That said, the story doesn’t always do the same and is simultaneously thin and convoluted – Cenobites consider Nightbreed an affront to their suffer club so deign to wipe them out. But there’s infighting in Lord Leviathan’s gang and nobody pulls one on Pinhead, so there’s a sort of team up as well as some flashbacks to the crusades. But this is not one for the plot, it’s for the incredible artwork and the individual moments. There are double splash pages that aren’t really splash pages, more unbridled panels spilt out in a fashion one might expect from a Cenobite who spends its down time at the drawing board. The standout characters are Pinhead, naturally, and Peloquin, both to my mind among the best creature designs of contemporary horror. In fact, Pinhead has a put down in this that is one for ages, and Peloquin’s story arc imbues the character with a lot more depth than the bitey arsehole we meet in the movie. This two part book may not be the best story either franchise has to offer, but if you can find a better looking one, sell your soul for a copy.

I AM LEGEND – Written by Steve Niles, Art by Elman Brown, Published by IDW

There have been more than a few adaptations of Richard Matheson’s classic novel I Am Legend, but as a fan of the book, neither Charlton Heston or Will Smith were quite able to capture the desperate everyman quality of the protagonist Robert Neville. Originally published in 1991 by Eclipse and collected years later by IDW, the comic adaptation is written by master horror scribe Steve Niles with art by Elman Brown. This is quite literally the illustrated novel and all the better for it as it consciously chooses not to play with the narrative, keeping the ‘vampire’ designs simple, spooky and recognizably human. Transcribing passages of the book onto sequential illustrations helps create a sense of distance akin to what Neville feels throughout, and the grainy black and white artwork deftly realises a story that has more in common with Night of the Living Dead than adaptations with more Hollywood sensibilities. Legend indeed. 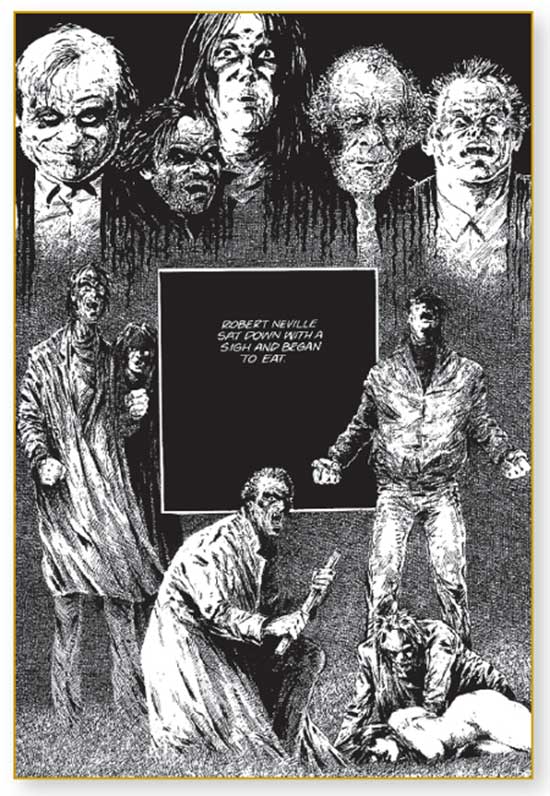 To round off this list, a straight up adaptation of a film that, ironically and intentionally, is a riff on the EC comics of the fifties. Bernie Wrightson, a regular collaborator with Stephen King back in the day, brings his movie script to life with sadistic relish, perfectly rendering the dastardly nature of the scheming protagonists, and their gasps of terror as they endure their comeuppance. I think I might have had a copy of this before I’d even seen the movie, and I recall that I was instantly enticed by Wrightson’s artwork (with cover by EC great Jack Kamen) for his ability to translate the glee I felt as a child sneakily reading a twisted horror tale. In fact, to this day I still think of Creepshow as a great horror to watch with your kids for its moralistic but playfully vindictive tone. Presented in a more European album style format, this is (kind of) a horror comic for all the family… regardless of what Tom Atkins says! 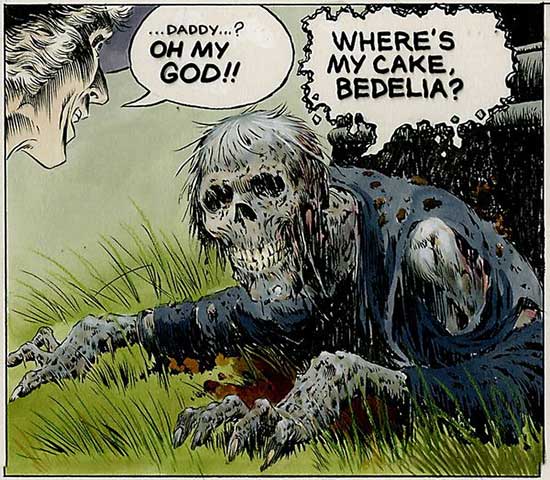