Scary Music II: 13 Legendary Halloween Songs and What Inspired Them 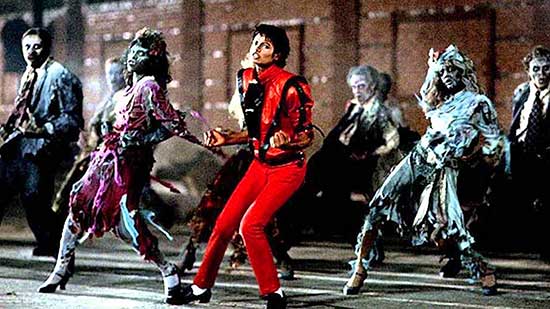 Halloween is creeping up on us and everybody’s got their favorite spooky playlist, including me. However, some readers may be interested to know, what really inspired the following 13 songs about werewolves, monsters, witches, Faustian deals, and the like? Some of the answers are surprising. Who would have thought that Zelda Fitzgerald (wife of The Great Gatsby author F. Scott) was the inspiration for the Eagles’ legendary Witchy Woman? Or that the “monster living under the bed” in the haunting Everlast tune Put Your Lights On is actually worldly sin and temptation?

In compiling this list, I mostly stuck with old classics (mainly because I’m old myself.) To be fair, I think that it takes two or three decades for a song to acquire “legendary” status. I also didn’t include great songs that were written specifically for movies or television shows, but which are now Halloween playlist staples, such as This is Halloween from The Nightmare Before Christmas (1993) or the theme from Ghostbusters (1984). I didn’t add them because obviously, those tunes were inspired by the productions for which they were written specifically to enhance.

Anyways, here’s my list, along with some research about what these famous tunes are actually all about. If you want to add to the list, let us know in the comments.

13. Witchy Woman (1971) by the Eagles; written by Bernie Leadon and Don Henley. Featuring one of the most recognizable minor key guitar riffs in rock music history, this classic hit was partially inspired by a biography of Zelda Fitzgerald, the free-spirited wife of Great American Novelist F. Scott Fitzgerald. (The book was probably this best-seller from 1970.)According to Song Facts, “The song’s lyrics didn’t develop until Henley went down with a flu and high fever while he was reading a book about Zelda Fitzgerald. ‘ I think that figured into the mix somehow – along with amorphous images of girls I had met at the Whisky and the Troubadour,’ he recalled.” It was used in the movie America’s Sweethearts (2001), a comedy, in reference to the raven-haired, ruby-lipped actress Catherine Zeta-Jones.

12. I Put a Spell On You (1956), performed and written by Screamin’ Jay Hawkins.  This much-covered song was originally intended to be a tender love song, but too much Demon Rum inspired a more devilish arrangement, according to the legendary bluesman who wrote it, Screamin’ Jay Hawkins.  “I don’t even remember making the record. Before, I was just a normal blues singer,” Hawkins was quoted by a biographer.  “I was just Jay Hawkins. It all sort of just fell in place. I found out I could do more destroying a song and screaming it to death.” Screamin’ Jay was never the same after the success of I Put a Spell on You. He adopted a macabre stage personality, and then played up his newfound screaming voice by dressing as a “witch doctor” and arriving on stage in a coffin. This song has been covered by everyone from Nina Simone to Marilyn Manson to Eric Clapton, but movie fans are probably most familiar with the campy version performed by Bette Midler in the beloved Halloween classic, Hocus Pocus (1993).

11. Put Your Lights On (1999) by Everlast (Erik Shrody) and Carlos Santana; written by Everlast. There’s a monster under the bed, and you’d probably better put your lights on right now and look – at least, according to this very creepy-sounding song from Santana’s album Supernatural. Songwriter Everlast, a devout Muslim convert, said this Grammy-winning blues-rock hit is really about questioning and reaffirming his personal religious beliefs after suffering a period of darkness brought on by a heart attack. Maybe so, but the song sounds like it belongs on a soundtrack for a monster movie (if it hasn’t happened all ready.) The tune was used for an episode of Veronica Mars in 2004. 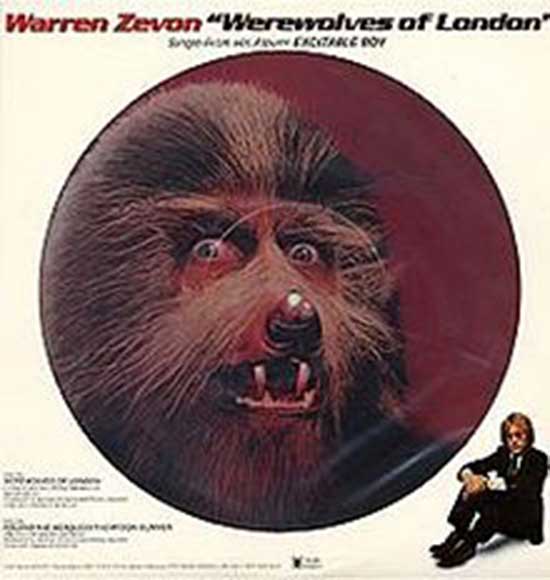 10. Werewolves of London (1975) by Warren Zevon; written by Zevon and Robert Wachtel. This staple of many Halloween playlists was inspired by the 1935 black-and-white classic horror film, Werewolf of London. The song’s tinkly piano lead-in is legendary, and its opening lyric – “I saw a werewolf with a Chinese menu in his hand” –  was once declared the greatest opening line of a song in popular music history by the listeners of BBC2 radio. It was used on the soundtrack of the Martin Scorsese film The Color of Money, but it was inexplicably passed up by the director of the beloved lycanthropic epic, An American Werewolf in London (1981). Zevon called it a “dumb song for smart people,” but more than 40 years later, it remains one of his most-played hits.

9. The Devil Went Down To Georgia (1979) by the Charlie Daniels Band; written by Daniels and Vassar Clements. A fiddle player named Johnny plays Satan for his soul in this blistering bluegrass anthem that features some of the hottest fiddlin’ in music history. Daniels says the lyrics were “probably” inspired by a poem called The Mountain Whippoorwill by Stephen Vincent Benet, which references a fiddling contest in a Georgia country town. The theme also resembles the Faustian legends of the South surrounding the legendary Delta Blues guitarist Robert Johnson, who allegedly sold his soul for the ability to be the best guitar player ever. The tune’s most famous lyric – “A fiddle of gold against your soul cause I think I’m better than you” – was quoted by Marc Pellagrino as Lucifer in a Season Five episode of Supernatural. It has been covered many times by various bands and performers, including Primus and The Muppets.

8. Moon Over Bourbon Street (1985) by Sting, from The Dream of the Blue Turtles solo album; written and performed by Sting (Gordon Sumner.) Something stalks the most famous street in New Orleans at night, ashamed of its need for human prey. “You can never see my shade, or hear the sound of my feet, when there’s a moon over Bourbon Street.” Does the location and the protagonist sound familiar? Yup, this eerie tune was inspired by the best-selling Anne Rice novel, Interview With The Vampire, which Sting read in his hotel room while on tour. (The 1994 Neil Jordan film hadn’t been made yet.) On Song Facts, there’s this quote from Sting: “Anne Rice’s Interview with the Vampire was the direct inspiration for this song, but there was one moonlit night in the French Quarter of New Orleans where I had the distinct impression that I was being followed.”

7. Sympathy for the Devil (1968), performed by The Rolling Stones, written by Mick Jagger and Keith Richards. The classic Stones hit was inspired by a 20th Century underground Russian novel called The Master and Margarita, by Mikhail Bulgakov. This novel is a satire about Satan’s adventures during a visit to the old Soviet Union. The song memorably contains lyrics about the murder of the Russian royal family during the Russian Revolution. A copy of the Bulgakov book was given to Jagger by his girlfriend at the time, singer and actress Marianne Faithful. A cover version of the song by Guns ‘N Roses was used memorably on the soundtrack of Neil Jordan’s Interview With the Vampire (1994) and the original was used in the 1998 Denzel Washington supernatural thriller, Fallen, along with another Stones classic hit, Time Is on My Side.

6. (Ghost) Riders In the Sky: A Cowboy Legend (1948), written by Stan Jones, a cowboy actor and singer. This eerie country/western song has been recorded by nearly every big name in the genre, but the best-known versions are probably the ones recorded by Marty Robbins and “Singing Cowboy” Western star Gene Autry. The lyrics feature a story about ghost cowboys doomed to chase demonic red-eyed cows—aka “Satan’s Herd”—across the sky for eternity. Jones said the song was inspired by a cowboy legend he heard as a boy. Folklorists say the legend resembles an ancient European folk tale called The Wild Hunt about ghostly hunters chasing wild spectral game across the heavens. The Autry version was used in the Western film Riders in the Sky (1949).

5. Black Magic Woman (1971), performed by Santana; written by Peter Green of Fleetwood Mac. Santana’s signature tune for almost half a century, Black Magic Woman is actually a cover of a minor Fleetwood Mac hit from 1968. The most recognized recording of the tune features an instrumental mash-up called Gypsy Queen, written by jazz guitarist Gabor Szabo, which was added by band leader Carlos Santana. Black Magic Woman inspired a low-budget horror movie of the same title, starring Mark Hamill, in 1991. A version of the song was also used on the soundtrack of the Steven Spielberg movie, Munich (2005). 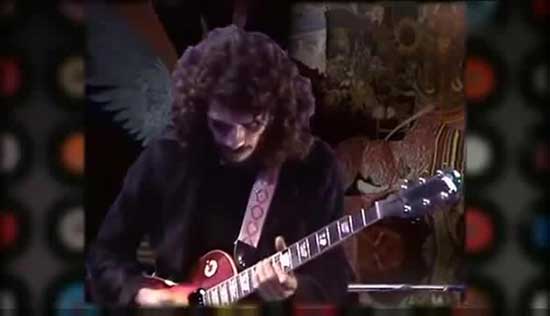 4. Bad Moon Rising (1968), performed by Creedence Clearwater Revival; written by John Fogarty. You really don’t want to go out at night when you see this bad moon, or you’re bound to lose your life. The classic song by ‘60s roots rockers Creedence Clearwater Revival has been used for numerous movie scores over the past fifty years, but it’s probably most familiar to horror fans as the background music that plays just before the werewolf transformation scene in John Landis’s beloved classic, An American Werewolf in London (1981). It seems like it was specifically written to be the perfect werewolf song, but it was actually inspired by the tumultuous political events of 1968, culminating in the election of Richard Nixon as president, as well as an old black-and-white film called The Devil and Daniel Webster (1941), a Faustian tale about a man selling his soul to Satan.

3. Monster Mash (1962), performed by Bobby “Boris” Pickett and the Crypt-Kickers; written by Pickett and Lenny Capizzi. Who doesn’t love the Monster Mash? No Halloween playlist would be complete without it. Pickett, an actor and singer, used to do a nightclub act with a band called The Cordials, where he impersonated the legendary horror star, Boris Karloff. The Karloff impressions were so popular that Pickett and fellow band member Capizzi turned them into a song. (The Crypt-Kickers were actually studio musicians.) Reportedly, the evergreen hit was recorded in one take. It’s been a graveyard smash ever since. In 1995, a film of the same title, inspired by the song, was released, which starred Pickett as Dr. Frankenstein.

2. Hotel California (1977), performed by The Eagles; written by Don Felder, Glenn Frey and Don Henley. One of the creepiest tunes ever written, Hotel California is that nightmarish place along a dark desert highway, where you can always check out, but you can never leave. Guests try to fight the evil presence there, but they just can’t kill the beast. It’s really mostly about the dark side of the Los Angeles music business in the 70s, fueled by drugs, wild sex, and crooked record producers, as well as the materialism and excesses of the American Dream. The cultural impact of the song was such that the term “Hotel California” has become pop cultural shorthand for describing a situation that’s impossible to extract yourself from. Fittingly, the original recording was used in the pilot episode of American Horror Story’s Season Five (the Hotel season.)

1.Thriller (1983), performed by Michael Jackson; written by Rod Temperton. The title track from the best-selling album of all time of course deserves the Number One spot on this list. Inspired by 50s monster movies (especially the Lon Chaney Jr. Wolfman flick), the track also features a legendary spoken-word voiceover by the King of 50s and 60s Horror, Vincent Price, similar to the “Karloff” spoken word performance in Bobby Pickett’s Monster Mash. The famous zombie dance from the John Landis-directed video was inspired by George Romero’s classic film Night of the Living Dead (1968), (and probably also owes a debt to Monster Mash as well.) Price was famously offered his choice of either a set fee or a percentage of the royalties, and he lived to regret taking the set fee, as Thriller zoomed up the sales charts and the video went on to become the most-viewed video of all time.