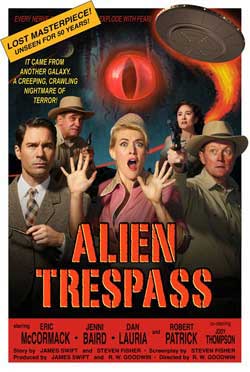 After crash landing near a desert town, an alien enlists the help of a local waitress to re-capture a monster that escaped from the wreckage of his space ship

Alien Trespass is a 2009 scifi comedy based on a 1950’s alien movie. It stars Eric McCormack and Robert Patrick. It’s directed by R.W. Goodwin. It’s about an actor (Eric McCormack) who gets into a fight with a major Hollywood studio back in the 1950’s. The alien movie that Eric made never got released because of it, until now.

The movie opens up with pretty much what we just said in the above paragraph. Nothing much more to it. The alien movie (that was on hold until now) is about a spaceship (which everyone thinks is a shooting star) that crashes onto Earth. Two people making out in a car sees this crash. (Dick, played by Andrew Dunbar and Penny, played by Sarah Smyth.) A monster leaves the spaceship and eats people, leaving puddles behind. An alien from that same spaceship named Urp knows how to stop this monster (which is called a Ghota). Urp puts himself into an astronomer’s (Ted Lewis, played by Eric McCormack) body in order to go around and find this Ghota before Earth is destroyed by it.

We’re not quite sure what to say about this movie. The idea behind it really was creative. The cast did a great job, but that’s about it. The movie may work for some people, but it just didn’t work for us. Maybe if we were more into 1950’s scifi we’d be more positive about this movie. You knew that the actors in this film were in on the fact that they were in a cheesy film, but that didn’t seem to help it much.

There’s not really a such thing as a movie so bad that it’s good. What the phrase really means is the movie is so bad that it’s fun. We’ve had a lot of fun reviewing some of the bad movies we’ve been submitted to. The ones we have the hardest time reviewing are the deeply mediocre ones. Alien Trespass is a movie cut from the cloth of fun/bad sci-fi thrillers of the fifties and sixties. What it succeeds in doing is making itself just good enough to be mediocre, thereby losing its fun factor.

There comes a point where a genre is done, redone, deconstructed and spoofed to extinction. Westerns have gone that route, although the style has garnered enough respect to keep coming back for the occasional curtain call. Sci-fi thrillers didn’t become respectable until James Cameron sat down in the director’s chair. The stuff from the fifties is best left where it is, dead and buried and recycled for Mystery Science Theater 3000.

Alien Trespass is a movie that could have been funny if it had failed as a drama unaware of its schlock factor. The problem is, the movie is quite aware of itself. But being in on the joke doesn’t make you cool, particularly is you deliver the punch line without the setup. This movie fails as a comedy. When that happens there’s really nowhere to go. The movie exists, that’s all there is to say. Not good, not bad, not interesting.

Robert Patrick is an outstanding actor who deserves better than the career he’s had since Terminator 2 (he knocked it out of the park on The X-files, if anybody was still watching). Here he’s wasted in a role that could have been liberating for him if he’d been allowed to play it tongue in cheek. The same goes for Eric McCormack, who always has a natural charisma on camera. Hopefully he’ll have the gumption to say no to the sequel. All in all the cast really needed some humor to play with, or some wit to convey. Arachnaphobia was a small town monster movie that breathed life into its cliche’s. Alien Trespass merely organizes them into chronological order.

The Academy Awards should have a new category for best picture never made. The studio should announce that they were going to produce a movie like Alien Trespass but decided instead to donate the budget to help relieve the nation debt.