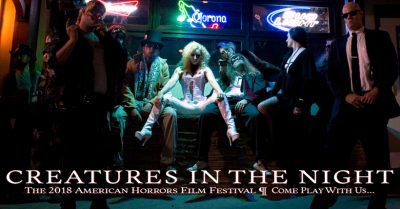 The breakout smash horror film festival of 2017, The American Horrors Film Festival, is back and is hungry for YOUR entry!

All entries can be made online at: filmfreeway.com/festival/TheAmericanHorrorsFilmFestival

To make things even more interesting, The American Horrors Film Festival will have it’s very own tv special, taking place during the festival at the historic Geneva Theaters (geneva4.com/ )in downtown Lake Geneva with it’s participants, panelists, audience members and everyone who walks the red carpet of death to be filmed for a tv special to be aired worldwide on the new American Horrors Roku channel (with a viewing pool of over 50 million)!

Fulltime students get 50% off on all entry fees!

The Winners of Best Feature, Best Short & Best Music Video will win cash prizes, an (optional) contract to have their work air on the American Horrors channels worldwide, plus more crazy prizes TBA!

The streaming American Horrors channel is available on Roku & for free online at americanhorrors.com/