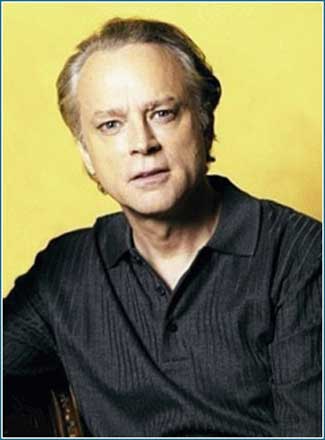 Sarah and I were fortunate enough to sit down for a few minutes with Brad Dourif, Brian Metcalf and the cast of Fading of the Cries. We all introduce ourselves, Brad offers me a chair and we sit down to talk. Brad is immediately sweet and helpful, and we can’t wait to do the interview.

Our first question was about Fading of the Cries. Brad was highly complimentary to Brian’s talent and if you’ve seen the trailer for the film you know exactly what he’s talking about. The images look outstanding, and quite convincing when you factor in that it’s a fantasy/horror film. There’s not a trace of camp to be found. Brad indicated that Brian had limited funds to achieve what he wanted. To say the least, we’re blown away by what we’ve seen. Hollywood needs directors like Brian Metcalf.

“Brad is a demonic overlord. He’s reeked havoc trying to find a necklace.”

The film stars Thomas Ian Nichols, Holly Marie Combs, Elaine Hendrix, and Hallee Hirsh as Sarah, the character whose uncle owned the necklace. The protagonist of the film saves Sarah and her mother from the evil that runs rampant through the town.

“I wanted Brad back when Exorcist III came out,” Brian adds.

And why wouldn’t he? Brad Dourif is an icon of horror films having performed in One Flew Over the Cuckoo’s Nest, Alien Resurrection, Rob Zombie’s Halloween, The Lord of the Rings Trilogy and the Child’s Play series (probably his most familiar role).

“Do you have a favorite role?” I ask him.

“Whatever I’m doing is what I love and then I put it behind me. I love making movies and really making it crackle.”

“What made you want to become an actor?”

“My mom,” says Brad. “My mother played Anastasia and there was this scene where she was talking about a butterfly.” He gestures toward an empty space where an imaginary butterfly would be. “I could see the butterfly, and where it was and what it was doing. I wanted to do that.”

“How do you connect to your characters?” I ask Brad.

“I’m a monster,” he responds without hesitation. He gives us a quick overview of what he’d like to do to other drivers while he’s on the road. That sounds all too familiar.

We ask Brad if he can shed a little light on the nature of horror.

“Everybody carries a genetic coding that says ‘don’t get eaten’. We’re animals. And with horror you have a monster who doesn’t negotiate.” Sounds like Chucky. “No matter how funny Chucky becomes he will turn you into meat. I always stress that to directors. He loves his work. He loves killing.”

“Were you surprised at how popular the character became?” asks Sarah.

“No,” says Brad, “That didn’t surprise me at all. I thought it was really smart that the series made fun of itself.”

“When I was young I didn’t see them,” Brad tells us. “I couldn’t sit in the seat.” He goes on to explain that he spent more time in the bathroom and the hall than in the showing of a horror film. “Horror has changed. It used to be about the event. Then Tobe Hooper came along and filmed this movie that looked like a documentary.” I incidentally just watched The Texas Chainsaw Massacre, and it’s still dramatically intense.

“He’s such a sweet guy,” says Brad pleasantly. “It always surprised me because he doesn’t seem like the kind of guy who would direct, but he really takes an interest in things. You can just sit down and shoot the sh*t about sh*t”

I can’t help but mention Brad’s role as Saavedro in Myst III: Exile.

“Myst III was fun,” Brad smiles. “I love the graphics. Everything was blue screen. They had the whole world created before I was there.”

Too soon we’re out of questions and we thank the team of Fading of the Cries for taking the time to speak to us. Meeting Brad Dourif has been so exciting for me that I forget my backpack, with which the whole team is kind enough to reunite me.

This has been our first celebrity interview and I feel very fortunate to have spoken with an actor as talented and gentlemanly as Brad Dourif. Sarah and I are extremely enthusiastic about Fading of the Cries and we encourage everyone to check out the trailer on Youtube. The movie is slated for a 2010 release.