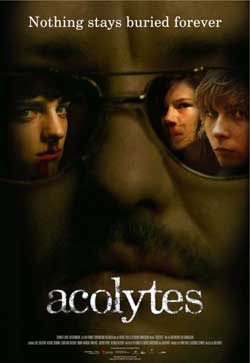 After stumbling upon a freshly buried body and learning the identity of the killer, high school student Mark (Sebastian Gregory) convinces his pal James (Joshua Payne) and James’s girlfriend, Chasely (Hanna Mangan Lawrence), to blackmail the perpetrator. Believing that the killer can take out a bully who ruined their lives, Mark and James fail to realize that the rules will change once they step into the murderer’s world.

So what is with the strange title and what does it mean? An acolyte is anyone who performs ceremonial duties such as lighting altar candles. In other Christian Churches, the term is more specifically used for one who wishes to attain clergyhood. After viewing this film I still can’t make the connection to the film and its title. In fact the word itself was enough to investigate it’s meaning, though this film has no religious connotations.

I wanted to call this one “trouble brewing in urban suburbs” upon completion. A film that “feels” like the product of many and yet still stands on its own comes across as a pretty well written piece of work. Comparisons quickly came to mind in the form of “River’s Edge” and the rather new release of “Makeout with Violence” (which isn’t out yet at the time of this review). 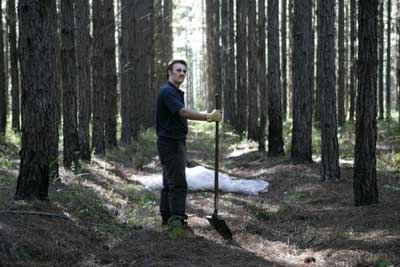 The setup? 3 kids and best friends for that matter, James Tresswick , Mark Vincent and the Chasley Keys….. the middle girl and area of tension in the group, go about their days as most kids do. James and Chasley are a couple who flaunt that fact to third wheel Mark on more than one occasion. It’s clear though that Mark has more than a friendship interest in the rather flirtatious Chasley The antagonists of this film come in the form of not one but 2 characters.

There’s local bully Gary Parker who has a history of abusing young boys and is highly scrutinized and shunned by his neighborhood community after serving some time in jail. Ian Wright (Joel Edgerton) is the rather enigmatic psycho killer from the suburbs character of the film. His nature and profile was closer to someone straight out of a Millennium TV series episode.

One day while backpacking, Mark witnesses a man burying a body deep in the forest. As the man drives away the vehicle is easily identifiable within a small town setting. The 3 kids unbury the dig and discover a body. In the setting of the town, a local teen has gone missing by the name of Tanya Lee. Who is revealed a being hit by a car in the woods in the opener of the film. Tension mounts high in the community with blame brewing to attach to however fits the bill. The kids, rather than alerting the authorities come to the conclusion it would be better suited to seek out the killer and use him for there own gain. young and curious they make the wrong decisions and flourish in them pretty heavily. 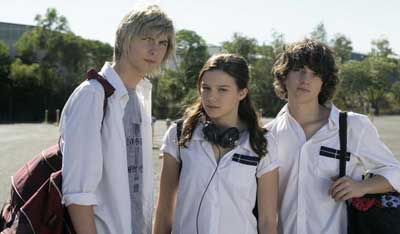 Much if this film even though draped in horrible circumstances is about a summer and a coming of age period in these kids lives. They turn there discovery into blackmail as they attempt to use Ian to murder off Gary Parker. Not a bad idea though it just so happens that the killer is bit smarter than they anticipated. I kept thinking though that at that age the motive “fit” right. That is……. using a secret to rid themselves of a childhood bully, but at the same time 2 wrongs don’t make a right. The arena of murder is no place for children to be toying with, as we will find out.

I will say this film has its share of surprises and thrills. Music impact sequences are used highly effective in short spats that appear out of nowhere. Most of them being surreal dream-esque imagery that paints a sort of retro story in progress to help fill the gaps of the narrative. From out of the story, develops an extremely well though out mystery and drama that fits like a glove into the horror aspect of “Acolytes”. Just when you thought you knew the direction it is taking, it throws in another twist.

This alone deserves mention which could have easily just played out in formal fashion. Another highpoint of mention is the way Jon Hewitt captures the essence of youth and flipflops the areas of evil and wrong intentions. There’s a clever balance of good and evil that constantly change hands in perspective. Justice vs. injustice which the scales are teetering all the time. 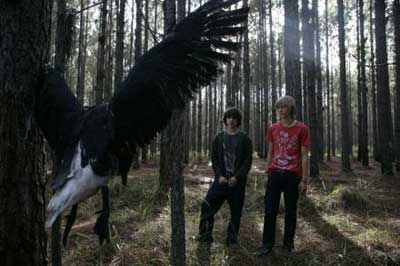 That’s probably enough to reveal at this point. I really enjoyed the story ethic of reversing certain antagonist / protagonist relationships. Well shot, well directed well written…this film came as a surprise that I wasn’t expecting. You’ll most certainly change viewpoints along the way which is only proof of a talent to indulge the audience in a special way.