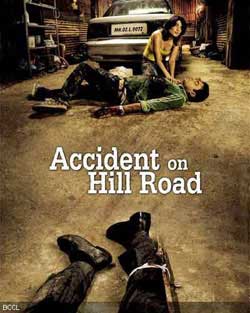 After she plows into a pedestrian (Farooq Shaikh) who becomes helplessly lodged in her car’s broken windshield, hard-drinking nurse Sonam (Celina Jaitley) drives home in a panic and parks in her garage, where she leaves the poor man to slowly perish from his wounds. But when the victim just won’t die, Sonam and her drug-pusher boyfriend (Abhimanyu Singh) try to finish him off and then conceal the crime. Mahesh Nair directs this drama.

The dark tale of what happens to a young Indian woman who chooses her own selfish intentions over saving the life of a man that she hits in a drinking and driving incident sets the stage for Maneesh Nair’s “Accident on Hill Road.” Being based on a true story, Sonam’s(Celina Jaitley) life is completely turned upside down when one small mistake leads to a series of misfortunes in a lesson she will never forget.
Sonam is a beautiful young aide, working at a nursing home assisting patients with that they cannot do on their own anymore.

Sonam smiles to the patients, and entertains them with jokes that brighten their day. Sonam meets up with her good friend Tina, and wait in horror to their boss, whom they cal l”the warden.” Sonam receives a phone call that she was accepted into the Red Cross in London, and is stoked to get out of working at the Nursing home. When Sonam informs “the warden,” she congratulates her and asks her and Tina to come into work early Sunday morning. This fact foils the plans that Tina and Sonam make to go out Saturday night to celebrate Sonam’s promotion, but they go out to the bar anyways.

Tina takes it smart and drinks Orange Juice, as Sonam parties the night away taking pills from her boyfriend Sid(Abhimanyu Singh) as they dance to club music. When the club is ready to close, Sonam insists on getting behind the wheel, reassuring Tina that she will be ok. Without Tina in the car, Sonam swerves and dashes in between cars, still intoxicated from the night’s victory drinks.

Another story is being intermixed, showing a daughter and her father(Farooq Shaikh) in a waiting room in the hospital. The daughter is speaking to her father about her mother’s failing condition, and is regretting her decision to go to New York. The father reassures her that she should go, and not worry about him and her mother. The daughter reluctantly leaves, but makes her father promise her that he will visit her in New York as soon as he can. When he accepts, she feels a little relieved and leaves the scene. Her father is next shown by the bedside, as his wife passes away. He leaves the hospital, and instead of driving home, he decides to take a walk. This decision will be probably the worst decision he has ever made.

Sonam is getting close to home, and decides to call Sid to make sure that he brings food to her home. When he gets a hold of him the first time, she attempts to call again while trying to keep her eyes on the road. In a striking turn of events, the father walks out in front of Sonam as the car comes crashing into his body. The father flies through the windshield, and Sonam stops the car and jumps out. The father is stuck in the windshield, with everything from his waist down being displayed on the hood of her car. Sonam’s mind freezes, as she tries to decide what the best thing to do. Unfortunately, all her decisions are irrationally made, and the opposite of what she should have done by informing the authorities.

Sonam’s journey into complete desperation is very well portrayed, and she goes from calm and collected to completely stressed and strung out by the end of the film. No matter how hard she tries to keep her act of hitting a pedestrian secret, there is always some way that the father is found or tries to get out of being stuck in the windshield. Sid is also very supportive, as he tries to sooth Sonam’s worries with liquor and drugs. The viewer is almost compelled to want to beg Sonam to just call an ambulance, as the poor pedestrian lies in the glass that is painfully stabbing him in the side. In one scene, he finally frees himself from car by pulling a piece of glass from his blood-soaked torso, making the viewer cringe in sympathy.

Maneesh Nair’s “Accident on Hill Road” is an exciting thriller that leaves the viewer wondering what will Sonam do next while trying to hide her big mistake of striking a pedestrian under the influence. Sonam’s distraught causes her to think irrationally, and try to avoid the fact that she could get in less trouble driving for striking a pedestrian under the influence versus the act of actually killing him and hiding the body in a hit and run case.