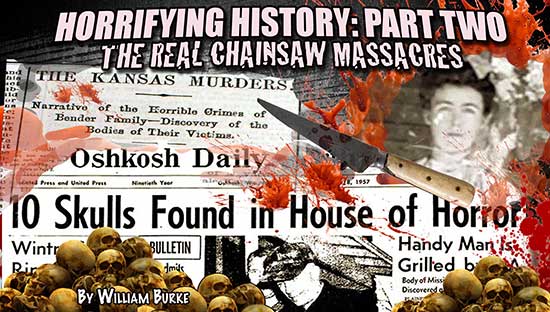 Horror film history is filled with imaginary psychopaths whose exploits are based on real life maniacs. Classics like Psycho (1960), Henry Portrait of a Serial Killer (1986), M (1931), and Targets (1968) were all fictionalized versions of genuine human monsters who had fascinating stories well-worth revisiting. To kick things off, we’ll focus on the inspirations behind the late Tobe Hooper’s first and greatest film.

Hooper’s 1974 directorial debut, The Texas Chainsaw Massacre, was a genuine game changer, proving that the people next door were more terrifying than any supernatural creatures. The sexy vampires of Hammer Films gothic chillers seemed quaint compared to the psychopathic Sawyer clan. But Hooper’s film may have been inspired by notorious real-life figures. We’ll start with the two most well-known ones, but stick around because number three’s a doozy!

The Sawyer family’s Abattoir Chic décor was clearly based on Plainfield Wisconsin’s notorious murderer, necrophile, transvestite, and momma’s boy Ed Gein. I’ll cover Gein in more detail in a follow-up piece about Psycho, but here are the Cliff Notes. Despite being almost synonymous with the term “serial killer,” Ed Gein only murdered two people. What sealed his ghoulish place in history was his hobby of digging up human remains and using them to create handcrafted furniture and clothing, including a “woman suit” that he wore when he wanted to feel sexy. Gein’s crimes genuinely shook the Ozzie and Harriet sensibilities of 1950 America. Some historians even credit Gein’s antics with the invention, or at least the wider acceptance, of black humor as a coping mechanism. Reports of his atrocities led to gems like “Why did they have to leave the heat on in Ed Gein’s house? So the furniture wouldn’t get Goosebumps.”

Fun Fact- There was another 1974 film inspired by Ed Gein titled Deranged: Confessions of a Necrophile. It’s more accurate than Texas Chainsaw Massacre but still fictionalized.

Another inspiration for Texas Chainsaw Massacre was Scotland’s Sawney Bean, the patriarch of a murderous forty-strong cannibal clan. By the year 1600, Sawney and his brood had allegedly robbed and eaten over a thousand victims. The incestuous family lived in a cave that’s entrance was hidden during high tide. When the tide receded they would emerge from their cave like a guerrilla force, seeking travelers to rob, murder, and devour. The clan was eventually captured and executed using the typically humane methods of the day, which included having their genitals sliced off and being burned alive. It’s hard to say whether Bean and his brood were real or simply a cautionary tale designed to vilify the Scottish. At that time, the Scotts were stereotyped as being like Irish folk but with rabies. In fact, the word “Sawney” (short for Alexander) actually entered the Oxford Dictionary in 1704 as a derogatory term for Scottish.  But perceptions change over time, and Sawney Bean’s bloodthirsty brood lives on as a vital part of Edinburgh’s tourism industry today.

So those were the two most obvious inspirations, but I like to think Hooper’s youthful imagination was sparked by another true tale that was closer to his Texan roots – in fact, this real-life slaughterhouse was just down Interstate 35, not far from his childhood home. I’m talking about that sledgehammer slinging Kansas family collectively known as The Bloody Benders. They were the Manson Family of the 1870’s, but with a way higher body count.

The Benders were a clan of German immigrants who built a modest two-room inn along the Santa Fe Trail near Cherryvale Kansas. The family consisted of John Bender, his wife (wait for it) Elvira, their dashing but dumb son John Jr., and their pretty daughter Kate. The Benders claimed to be devout spiritualists. They believed the dead could communicate with the living, and Kate even supplemented their income by conducting séances and spiritual healings.

In 1870 the Santa Fe Trail was considered a dangerous travel route plagued by highwaymen, hostile natives, and disease. But for some reason the highest disappearance rate was right around the Benders’ inn. Among those missing were George Longcor and his infant daughter Mary Ann. Longcor’s longtime friend, Dr. William York, went to search for them. One night he decided to consult spiritual medium Kate Bender and that was the last anyone saw of him.

Fortunately, Dr. York had two powerful brothers, an army Colonel and a Kansas State Senator, both hell bent on finding out what happened to their sibling. The York brothers arrived in Cherryvale with an armed posse and called a mandatory town meeting. They announced their intention to search every local homestead for evidence of their brother’s fate. Among the attendees was John Bender who immediately packed up the family and ran for the hills, abandoning their livestock to starve.

Tipped off to the starving animals, the posse descended on the Benders’ homestead. A foul smell guided them to the root cellar where the soil was soaked in a thick layer of congealed blood. They also found several bloodstained sledgehammers and knives. The posse dug up the surrounding property, discovering a dozen dismembered bodies, including Dr. York. Most had been struck with a hammer and had their throats slit. The exception was a young girl who the Benders had buried alive under her father’s body. 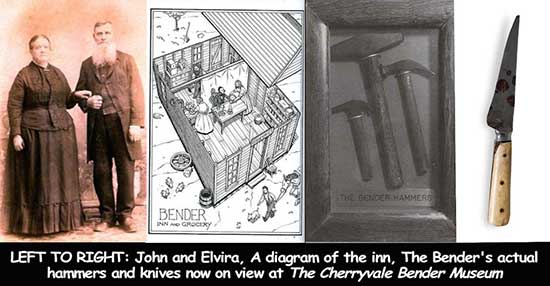 Investigators pieced together the Benders modus operandi. Travelers were lured to the inn with offers of lodging or a spiritual reading. Either John or John Jr. would hide behind a canvas curtain that the victims were directed to sit in front of. The victim would be clobbered from behind with a sledgehammer, then Elvira or Kate would finish them off with a straight razor. Some victims were well-off travelers carrying a fair amount of cash. Others were obviously destitute souls who the Benders murdered for the sheer joy of killing. The initial body count was twelve, but  the evidence suggested that there may have as many as two dozen victims. But there are more creepy revelations yet to come.

It later emerged that Elvira Bender had been married several times, but all of her husbands had died from mysterious head injuries. Perhaps from a sledgehammer? It’s also believed that Kate and John Jr. weren’t really brother and sister, but were married and had killed their own infant daughter. Also, Kate was morally flexible enough to have sex for money after conducting spiritual readings. 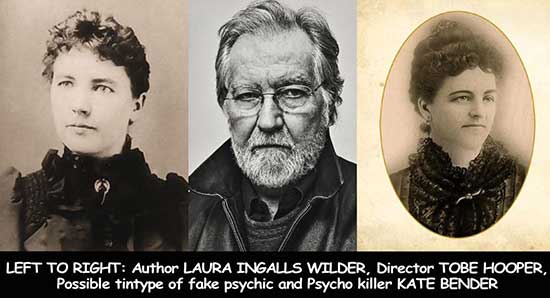 Like Texas Chainsaw’s Sawyer family, the Benders vanished into the night never to be seen again. Reports of vigilantes killing the Benders were just tall tales told in hopes of collecting the $2,000 reward. Authorities hunted the Benders for fifty years but never found a single trace of them… maybe they’re still out there. Many locals claim the Benders’ spirits haunt the roads around their old homestead. So if you’re ever in Cherryvale Kansas after dark and an attractive woman offers you a private spiritual reading with a happy ending… just go for it because life’s too short!

In an odd footnote, Tobe Hooper wasn’t the only creative mind to encounter the Benders. In her autobiography, Pioneer Girl, Laura Ingalls Wilder (author of the beloved Little House books) claimed to have met Kate Bender. She also revealed that her father was one of the vigilantes hunting for the elusive family. Some critics dispute these claims, but if you can’t trust Laura Ingalls… then who can you trust?

In our next installment we’ll explore the real-life inspiration behind Hooper’s second film, Eaten Alive. So get ready for the sickening saga of BIG JOE BALL AND HIS SNAPPY GATORS.