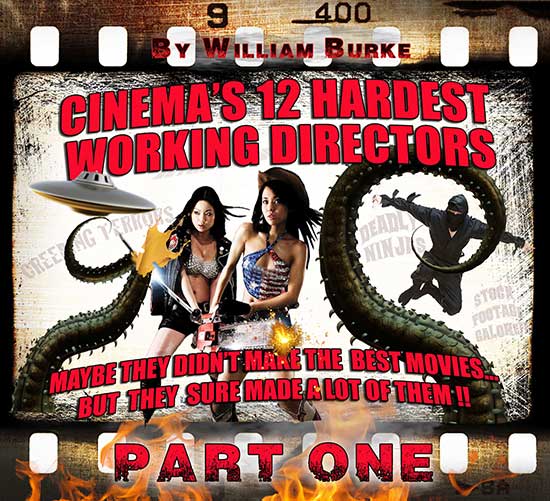 The late James Brown was a human dynamo whose relentless touring schedule earned him the nickname “The Hardest Working Man in Show Business.” But there are some movie directors out there whose untiring work ethic would have earned The Godfather of Soul’s admiration. Admittedly, some of the filmmakers on this list are more notable for the quantity of their work than the overall quality, but that’s not the point. We’re merely saluting this directorial “Dirty Dozen” who’ve collectively made over 1850 feature films—that number alone should earn them a little respect.

The criteria for making the list was simple—direct a ton of movies with at least a few being memorable genre films, be it horror, action or just general weirdness. Creating the list was a bit challenging given how many of these workaholics used multiple pseudonyms or re-titled their films for different markets. It probably took longer to compile the information than it did to make some of the movies! Enough with the whining… Here we go!

Sears wasn’t as prolific as the other directors on our list. Technically, you could argue that he only warrants an honorable mention. But here’s the thing—he directed all 54 of his films in the span of only eight years! Sears was a human dynamo who tragically worked himself to death by age forty-four. He started out as a dialogue director for Columbia Pictures before helming the studio’s series of Durango Kid westerns. Legendary low-budget producer Sam Katzman took Sears under his wing, hiring him to direct teen exploitation movies like Teenage Crime Wave (1955) and Rock Around the Clock (1956). In 1956, Katzman and Sears branched out into horror and science fiction with the underrated The Werewolf and the alien invasion classic Earth vs. the Flying Saucers. Though Saucers is best remembered for Ray Harryhausen’s magnificent special effects, it also stands up as a tautly directed film. In 1957, Sears returned to the monster movie realm with The Giant Claw, which, being the polar opposite of Saucers, had some of the worst special effects in movie history. Despite his ups and downs, Fred Sears was a dedicated and creative director who, if given the chance, could have done great things. 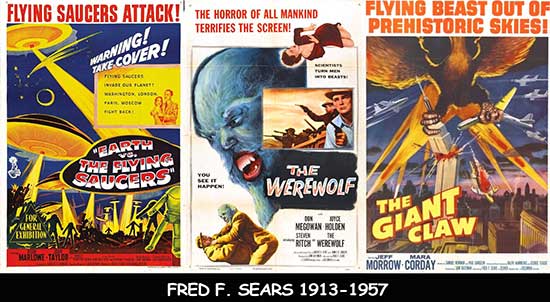 Klimovsky was an Argentinean dentist who went on to direct a staggering number of horror and fantasy films in the ’60s and ’70s. His career began in the 1940s when, between root canals, he founded Argentina’s first film appreciation society.  He parlayed that into local filmmaking opportunities with adaptations of works by Dostoyevsky and Alexander Dumas. These highbrow short subjects led to jobs directing Spanish/Italian westerns like Two Thousand Dollars for Coyote (1966). He’s most fondly remembered for the nine films he made with Spanish horror star Paul Naschy during the 1970s Spanish horror boom. The duo resurrected all the classic universal monsters including Dracula, the Wolfman and Dr. Jekyll. Utilizing actual castles and mausoleums as locations lent their low-budget films tremendous atmosphere. Adding liberal amounts of gore and nudity made them even more marketable. Naschy eventually decided to start directing his own films, ending their partnership. But Klimovsky remained a non-stop cinematic machine, directing over 70 films before retiring at age seventy-three. Despite limited budgets his movies were always technically slick, atmospheric and delightfully lurid. His creations like Trauma (1978) and The Vampire’s Night Orgy (1974) were prime examples of Euro-sleaze at its juiciest.

Signature work: La Noche de Walpurgis (English title – The Werewolf vs. The Vampire Woman). Like all his Paul Naschy films he gave it the gothic atmosphere of a universal classic topped with a shameless amount of gore and nudity. 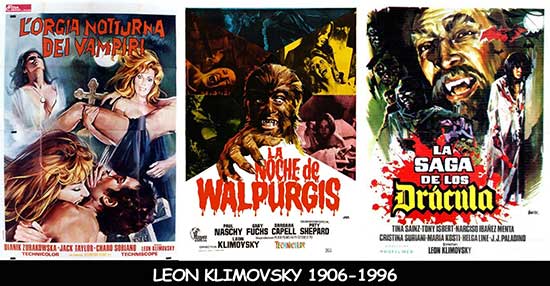 Cahn began his career at Universal Pictures as an editor before being handed the director’s chair. In 1941, he started directing short subjects like the Our Gang comedies, more popularly known today as The Little Rascals. He stepped up to features, cranking out dozens of B-pictures for major studios. By the 1950s television was killing the market for low-budget studio pictures. While this ended many directors’ careers, it fueled a new chapter in Cahn’s. He found his way to the fledgling American International Pictures where he helmed films like Dragstrip Girl and Invasion of the Saucermen (both 1957). Cahn’s directorial energy and willingness to be more ghoulish separated him from other directors. The surprisingly grisly Four Skulls for Jonathan Drake (1959) was a perfect example of his pushing the 1950s envelope. Cahn’s streamlined working style put him in demand at AIP, Columbia, United Artists and every other studio that was feeding the drive in the market. Creature with the Atom Brain (1955), The She Creature (1956) and Zombies of Mora Tau (1957) are just a few of his horror genre offerings. But he’s best remembered for 1958’s seminal horror/science fiction hybrid It! The Terror from Beyond Space. He worked non-stop until his death in 1963. During his life Cahn never got the recognition he deserved, but his films rose from the grave to chill a whole new generation on late night television. One of those viewers was a young George Romero, who credited Cahn’s Invisible Invaders (1957) as an influence on the look of his own zombies in Night of the Living Dead (1968).

Signature work: It! The Terror From Beyond Space—it’s Alien 1950s style and a great example of Cahn’s tight directorial style. 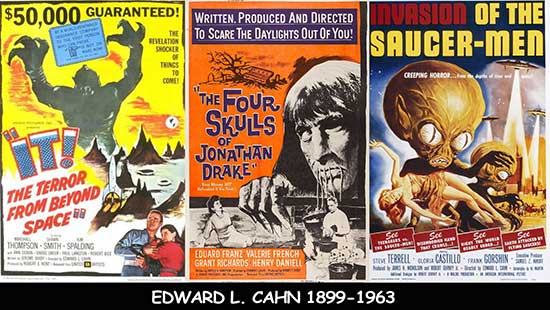 If anyone deserves to be called the spiritual father of the martial arts genre its Chang Cheh. Over the course of nearly a hundred films he reinvented the Wuxia genre, created stars and crafted the brightest jewels in the Shaw Brothers Studios filmography. Ironically, the man who personified Hong Kong film was once unfairly dismissed at home and abroad as a reliable hack. Part of this prejudice may have stemmed from his being Taiwanese, and therefore an outsider in Chinese cinema. Today, he is revered globally for the breathless energy and technical innovation he brought to the screen. Chang Cheh began as a screenwriter for Shaw Studios until his 1967 directorial breakthrough One Armed Swordsman exploded at the box office. This blood spattered, action-packed epic was a revelation, becoming the top grossing Hong Kong film of its day. From that moment on Chang Cheh worked non-stop, redefining the Wuxia genre by adding film noir treachery, spaghetti western anti heroes and buckets of heroic bloodshed.  Blood Brothers (1973), Brave Archer (1977), The Sword Stained with Royal Blood (1981) and Five Element Ninjas (1982) are just a few highlights of his illustrious career. His stock company of actors became known as “The Venom Mob” after their collective hit Five Deadly Venoms (1978). To sum it up, every Chang Cheh film is a perfect cocktail, equal parts adrenaline and serotonin.

Signature work: Most fans would choose Five Deadly Venoms (1978), but personally I love New One Armed Swordsman (1971), a follow-up that topped the original in terms of action, screenwriting and pure directorial style. 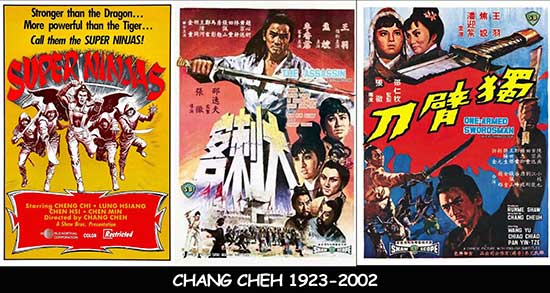 Sometimes considered the enfant terrible of low-budget films, Jim Wynorski has been unfairly maligned by genre buffs. This is a guy who eats, drinks and sleeps movies and that’s why he’s managed to make over a hundred feature films. He’s also a self-professed admirer of big breasts, a topic that pops up in most interviews. Like many filmmakers, his resume starts at Roger Corman’s New World Pictures where he interviewed as a production assistant only to be hired as the VP of publicity due to his encyclopedic knowledge of film. His first feature was the underrated movie serial homage Lost Kingdom (1984), but he really hit his stride with the robots on the loose opus Chopping Mall (1986), proving he could make a semi-epic with very little money. Wynorski continued cranking out Corman films. He proved himself to be a savvy businessman by hiring porn starlet Traci Lords to star in Not of This Earth (1988) right after she admitted she’d been underage for most of her hardcore career. That notoriety translated to big profits on home video. Wynorski went on to make films in every genre, sometimes incorporating stock footage from major studio films to beef up their visual spectacle. Unfortunately, he’s been the victim of constantly shrinking budgets, forcing him to shorten schedules and sacrifice quality. On a personal level there are two Jim Wynorski’s—the low key, funny guy and his temperamental “I hate it!” alter ego. The former is the real Jim, while the latter is rooted in shrinking schedules, budgets and resources with maybe a dash of only child syndrome. He’s still going strong with a string of family-oriented films like 2016’s Nessie and Me.

Signature work: The Return of Swamp Thing (1989) proved he could do snazzy things given a little more time and money. There’s also the documentary Popatopolis, which chronicles his (successful) attempt to make 2005’s The Witches of Breastwick in only three days. 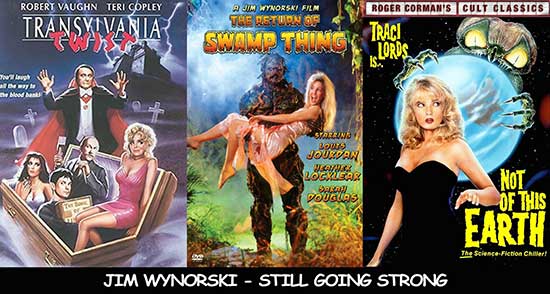 Very few directors on this list have combined a relentless work ethic with consummate artistry—Takashi Miike is the exception. He spent ten years laboring in television before jumping on Japan’s V-Cinema bandwagon in 1988. Though his first film Red Hunter: Prelude to Kill (1988) was fairly forgettable, its modest success paved the way for a series of low-budget films that allowed him to perfect his style. 1995’s brutal Shinjuku Triad Society opened the local floodgates, evolving into the Black Society Trilogy with Rainy Dog (1997) and Ley Lines (1999). Over the top, brutal and ferocious are terms most commonly thrown at Miike, but these descriptions fail to acknowledge the poetry that underscores even his darkest moments. The Asian market recognized his genius with hits like Fudoh: The New Generation (1996) and Full Metal Yakuza (1997). But it was 1999’s Audition that elevated Miike to international acclaim and success.  Nobody—and I mean nobody—was prepared for this sensitive tale of a lonely man turning into a bloodbath. If Audition lit the fuse then 2001’s Ichi the Killer was the explosion. Yet, that same year Miike directed the surreal semi-musical comedy The Happiness of the Katakuris, proving he was a pony with many, many tricks. Since then, he’s jumped from high to low budgets and back again, crossing genres and creating masterpieces. His period epic 13 Assassins (2010) stands head and shoulders with the greatest samurai films.  The best news is that this prolific filmmaker is only in his fifties—the prime of life for many artists. There is so much more to come from Takashi Miike.

Signature work: Fudoh: The New Generation (1996). I’m including this unsung gem so you won’t miss it. So much of Miike’s personal style and growth as a filmmaker is on display in this tale of Yakuza violence colliding with teenage angst. But if you’re trying to convert the uninitiated to Miike you should go with 13 Assassins. 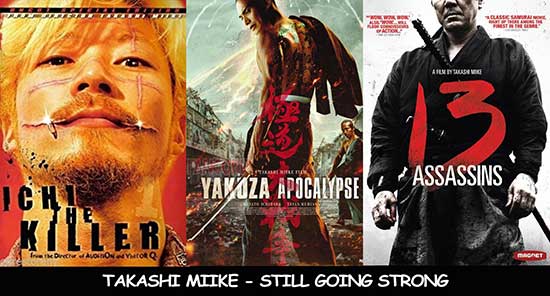 That was part one. Dying to know who’s the world’s fastest celluloid slinger? Well, stick around for PART 2, where you’ll meet a father-and-son film dynasty with 250 films to their credit, a director who wrestles on the side, Italy’s king of exploitation … and more.

Make sure and check out 12 Hardest Working Directors – Part 2