Fantastic Fest Film Review: Haunters: The Art of the Scare (2017) 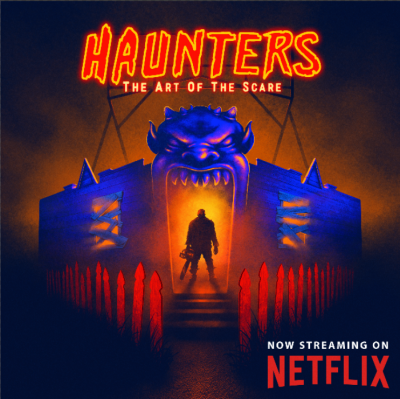 Delving behind the scenes of one of America’s most beloved seasonal pastimes, HAUNTERS shows the world of the people who make the scariest houses, mazes and experiences that range from the traditional to the controversial.

Every fall, millions of people flock to haunts across the country in search of that intoxicating cocktail of adrenaline, cortisol, and glutamate which only fear can properly arouse. While the public is primarily exposed to the monsters and elaborate set designs, director Jon Schnitzer gives audiences a behind-the-scenes look at their creators in his new documentary Haunters: The Art of the Scare.

Schnitzer compiles a revealing look at haunts as an art form and horror as a catharsis for those experiencing,  constructing, and working the haunt. The three major players Schnitzer focuses on are legendary monster actress Shar Mayer, traditional mom-and-pop maze designer Donald Julson (Nightmare on Loganberry), and the notorious Russ McKamey (owner/designer of McKamey Manor). Sprinkled in between these interviews are conversations with family members, other bigwigs in the horror industry such as Jason Blum, the Soska Sisters, and various scare actors who reveal their day jobs and why they love doing what they do during  scare season.

Julson is a heartbreaking subject to watch mostly due to the strain that haunts put on his marriage. The tension between him and his wife is nothing short of awkward and disappointing since they don’t fully share his evident passion for Halloween.  The divide is so strong that Julson is limited to when he can and cannot talk about Halloween, is given a budget, and asked to discontinue the haunt once they have children.  However, Julson’s love for his homemade haunt (constructed on his mother’s property) shines through the sunglasses he wears throughout the documentary. Constructing props for films such as Stephen Sommers’ Van Helsing, Julson had to take a break from the business, but in the end finds another outlet that allows him to use creativity and horror in a cathartic manner.

While some people cash in their vacation hours to participate in a haunt, actress Shar Mayer details her love of identifying as a full-time tormentor and developing a quick, yet impactful relationship with those she scares. Like many scare actors, Mayer’s mother did not agree with or approve of her profession and love of the craft. While her husband does, he expresses concern as Mayer has been physically attacked numerous times in haunts and continuously layers her costumes with protective gear to dodge the fight component of fight or flight reflexes. With tears of pain and love in her eyes, Mayer is dedicated and continues her work knowing that her time is limited, but gives the audience an emotional, heartwarming side to haunts that have ironically been her safe haven for decades.

On the extremist side is McKamey Manor, which is known for not having a safe word and where activities such as waterboarding and being locked in a coffin are common practice. Despite the intense experience, thousands fill up McKamey’s waiting list but must pass a psychological examination by McKamey in order to advance.  Getting up close and personal capturing participants’ dread with a camera, McKamey gets his kicks by seeing sheer terror in the eyes of those who are brave enough to enter into his haunt. A part-time wedding singer, McKamey’s love of performing is apparent, and his haunt is a way for him to elicit entertainment for himself and his crew of tormentors through methods that some in the business call borderline torture.

Schnitzer effectively maintains an entertaining pace throughout, and the editing between haunts and subjects provides a light-hearted, even comical feel to an otherwise spooky business. The history of haunts is also briefly mentioned alongside the way in which progression of scare severity is a direct correlation to events in the media and historical events such as The Great Depression and 9/11.  It would have been nice to elaborate a little more on the history and how society has become so desensitized to the point that thousands would literally wait over a year to simulate a kidnapping or get waterboarded. However, Schnitzer successfully supplies the pulse of the film’s heart, which is its focus on the love of the haunt by those who create them and work in them. Dissecting the industry individuals’ personality and passion is highly entertaining, and Schnitzer exposes a world that many love but do not get to see behind the curtains. Filled with fun and fright, Haunters is a worthwhile documentary for all horror fans and lovers of Halloween that even their dispirited spouses can enjoy.

Haunters: The Art of the Scare is now available on VOD and Netflix.