I feel before I get right to the meat of this review for Day by Day Armageddon: Beyond Exile I should confess a few things. Firstly, the ‘diary format’ is not one of my favorites. I think daily diary entries limit the amount of action, suspense, and character a writer can give you. Typically I avoid ‘dairy’ books like I would an actual zombie bite. So that leads me to my next revelation…I’ve never read the first Day by Day Armageddon. Not to say I haven’t been curious about it. I’ve read piles of well written reviews (and articles) about it but none of them interested me enough to take the time to check it out. I’ve heard from many of my friends in the independent horror scene how influential of a zombie novel it is but, still, I’m not a fan of the ‘diary’ craze and had no desire to give it a chance.

Well, J.L. Bourne shut me up with the effectiveness of a palm thrust to the throat with Day by Day Armageddon: Beyond Exile. This finely written novel contains page after page of great zombie action. Granted at times you will feel slightly lost with out a military-to-civilian-translation guide but the story never leaves you behind. The man writing the diary is a humble, yet determined, military man during the zombie apocalypse. The novel begins with the solider and a small handful of survivors settling into life in Hotel 23, an abandoned nuclear missile base. The solider is recovering from an attack that ended Day by Day Armageddon; an attack on the shelter not of the undead sort but rather vicious human rogues to be more specific. In the first few pages we realize the man writing the diary is both a military man and possesses the drive to survive. He mentions men he had to kill as if it weighs on his conscious, even though these men were seeking to overrun his shelter. The soldier is a de-facto-leader of Hotel 23 and is never able to set still for very long.

A constant drive to find and rescue and survivors outside of Hotel 23 keeps the action moving. The world outside the walls of Hotel 23 is a dangerous world taken over by hordes of the walking dead. The simple task of flying the Cessna plane on reconnaissance missions is made extra difficult by the scores of zombies that inhabit everywhere the living once did. A stop to fuel up the plane means a team effort of protecting each other and working quick to always keep moving. The soldier is a hero; rescuing people form the snapping maws of the dead like he is a cowboy in a bright white hat. He is human and has memories and heartaches but his drive to survive and help others seldom wanes for long.

After a few simple rescues that add more friendly faces to Hotel 23 a rag tag group of Marines stumbles upon Hotel 23. Our solider takes control of the situation and after a tension filled conversation (Mr. Bourne proves to be masterful at building the tension here to the point the pages almost turn themselves) the Marines and our survivors join forces.

At this point the story kicks into high gear; revealing what the military is up to (mostly secured to large navel ships and monitoring large hordes of undead and studying the ones the catch), what is happening to the dead (nuclear bombs dropped in a panic over highly populated areas have created a more dangerous breed of zombie that can run, fight, and even manage some thought.), and what lies ahead for our soldier and his group of survivors (sorry, that one I can’t tell you.) A simple rescue mission goes astray (in what is a truly harrowing moment to be sure) and the soldier ends up on his own miles and miles from the safety of Hotel 23. His drive to survive is amazing as he fights his way through undead terrors galore; each more terrible and dangerous than the last. Action sequences that set high standards are the order of the day when our soldier has to engage the zombies that lay claim to our world.

The ending sneaks up on you, as do several of the zombie attacks, and it sets up for a third installment so well that this reviewer, who once refused to pick this book up, is chomping at the bit for a part 3. J.L. Bourne is worthy of the praise heaped on him. He took a format I’ve never been a fan of and turned it into a great story of hope, survival, and the undead. Recommended whether you have read the first Day by Day Armageddon or not. 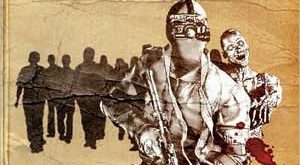