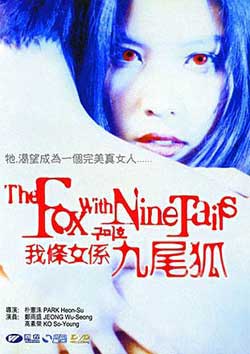 Since the nine-tailed fox, Harah, is a hybrid of human and fox, it desperately desires to become human totally. One day Harah runs into a handsome taxi driver Hyuk by chance and falls in love with him straight away. She hopes that by being with him day in and day out, Hyuk can be used as a tool to help Harah become a human being. However, as it turns out, despite her tenderness and kindness towards Hyuk, she is still not able to achieve her ultimate goal to become a woman. On the other hand, a prisoner in hell is appointed to catch Harah, and the whole process is appalling and breathtaking. A hot pursuit begins…

This Korean made horror film begins with a great scene of a train pulling up to a stop in hell. In this movie though hell looks like a seedy subway from a burned out future not some fire and brimstone pit of typical demons and devils. Most of the denizens of hell look like fairly normal humans but some of them are strange beings but more like creatures from the cantina scene from Star Wars. The train empties and people come out running and screaming , this is hell after all , and right away a executioner looking dude grabs one unfortunate human , kneels him down in front of a guillotine type contraption and proceeds to grab the guys tongue , pull it out to almost three times it’s length and cuts the poor schlubs tongue off! I don’t know the rules for the Korean idea of hell but getting your tongue lopped off seems to be one of them! Good scene , good way to start a film.

Our story begins when a worke in hell , Messenger 69 , is sent to earth against his will , to catch and either bring back or kill the Fox Girl. Only wearing a towel because he was visiting the sauna at the time he is thrown onto a train and sent to earth. Funny thing is the paperwork for the mission was messed up and it was supposed to be Messenger 96 sent to earth , not 69.

Fox With Nine Tails a.k.a FOX GIRL comes off as a total horror movie in the trailer but the horror and terror , like love , comes in spurts. The beginning is cool and there are scenes of the Fox Girl in a forest that certainly create a creeped out mood. Fox Girl is cool and has fox like features when she shifts from human to Fox Girl form , she’s strong , she can fly , can shoot glowing red blade like projectiles out of her fingertips , her eyes glow red and she can hypnotize men then chows down on their guts. So Messenger 69 has his hands full and he is not prepared to take on Fox Girl but attacks his mission so he can get back to hell. Why he wants to go back I don’t know because he has more fun on earth than in hell. Especially when he discovers chewing gum.
Other characters are Hyuk a luckless cab driver who gets to a brawl with some jerks. He kicks their asses but not without getting knifed in the process. He staggers away but is found and nursed by Fox Girl in her human but she leaves him out in the woods.

Later he gets robbed and his cab is stolen and afterword he meets up with Fox Girl again. Her human name is Harrah and they start up a relationship. Then there’s Minhee , a fortune teller who Messenger 69 is mystically drawn to. They team up to stop Fox Girl from sucking out Hyuks soul with some blue marbles and becoming a full fledged human. Yeah , I know , marbles! Halfway through THE FOX WITH NINE TAILS turns to a love story between Harrah and Hyuk while Messenger supplies some comedic flashes as he is repeatedly thwarted from stoppping Fox Girl. He gets arrested , must depend on Minhee to drive him around and score him bubblegum , and is mostly a bumbling moron.

So the horror element comes in few and far between and if they would have focused more on the horror I would have enjoyed it much , much more. When things get Foxy and supernatural it is cool , like when Messenger 69 sneaks into Harrahs house while she and Hyuk are being intimate , Harrah senses something is amiss and goes looking for the intruder. Messenger 69 hides and while he’s hiding the corpse of one of Harrahs previous victims falls over and leans right up against Messenger 69. Cheek to cheek. You can tell it’s a full prosthetic body and the special efx artist did a good job! Harrah catches Messenger 69 and fires one of her laser knives at him but misses and hits the corpse in the side of the head! That ws cool. 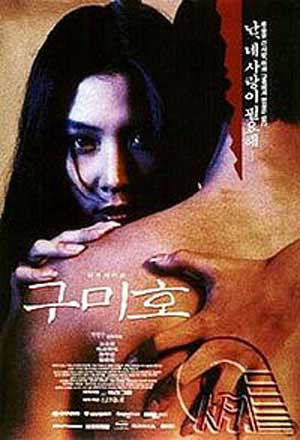 But that’s about it until the end when Fox Girl and Messenger 69 , along with Minhee , have their final showdown. Fox Girl has a certain amount of frightfulness as she is pretty ugly in Fox form and it does have a downer ending but it never goes for the full on scares and there is no gratuitous gore. I have heard that Koreans , along with other countries as well , try to mimic and copy American films. That seems to be the case with Fox Girl as it never gets too crazy when it seemed like it could have. It’s well made but just lacks in the terror department. Unless you just have to see every Korean horror film ever made you can skip FOX GIRL for now. My copy is not playable on American dvd players , you’ll need one of those regionless players. So check out THE HOST or TELL ME SOMETHING or wait for my review of these two coming soon.