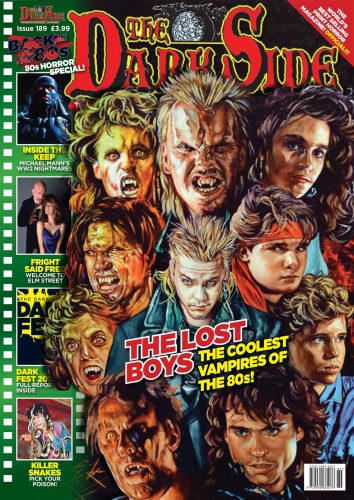 It says something about the quality of the Dark Side’s content when, despite the 80s horror
extravaganza within this issue, I instead went for the report on the first ever Dark Fest, a Dark Side event in London which sounds so much fun that I’m tempted to head to the next one. I’m a Northerner, so actually wanting to visit the capital and be surrounded by Southerners speaks volumes. Dark Fest looks like a hell of a lot of retro cinema fun. As chronicled by editor Allan Bryce and attendees, the event comes across as one of those occurrences where everyone is on the same page, and – let’s be honest – being around like-minded horror nerds is a beautiful thing. Dealers, guests, film screenings and more were on offer, and the thought of seeing thee 4k edition of SUSPIRIA on the big screen with those who understand its beauty makes me wish I’d been there even more.

This is followed by the increasingly popular letters pages, which fill four and a half pages in this issue. I really like the inclusion of the letters pages, as not only does it bring back the classic letters pages in horror and genre mags of yesteryear, but it’s also impossible to argue with or flame a magazine page, which makes discussions from issue to issue far more structured and interesting than just watching people bitch at each other online.

Brad Steven’s Choice Cuts feature this issue takes an in-depth look at the various releases and cuts of Jess Franco’s She Killed In Ecstasy, which goes into a remarkable level of detail regarding footage included or missing in different releases.

The main attraction this time around is a spectacular (and spectacularly lurid) look back at the horror films, icons and zeitgeist of the 1980s. This is a delight from start to finish, and very refreshing, given the Dark Side’s usual bias towards the 1960s and 1970s rather than the era of mullets, shoulder pads and Freddy and Jason. Freddy and Jason didn’t have the mullet or shoulder pads though. Now that would have been frightening.

Andrew Llewellyn follows this with a look at the perfect 80s vampire double bill – The Lost Boys and Fright Night. An interview with nine other than Fred ‘Monster Squad’ Dekker is up next, and worth the entry fee on its own. A look back at the oddness of The Keep is good fun, followed by the usual high standard of DVD and Blu-ray reviews.

The 80s fun continues with a feature I would love to see expanded into a book – a fascinating retrospective of the Nightmare on Elm Street franchise and the cultural phenomenon of Freddy Krueger. How a demonic child murderer became a pop culture icon makes for an odd yet engaging story, and I would happily lay down cash for a copy of a book in the same vein.

The stage play A Man With Red Hair, based on Hugh Walpole’s novel Portrait of a Man With Red Hair is investigated by Neil Pettigrew, while Normal Eshley remembers his genre parts in an interview with Simon Fitzjohn. Rounded off by a piece on unsung trash gem The Killer Snakes, The Dark Side’s treasure chest continues to overflow with bloodied goodness. The standard is high throughout, and this absolute gem of a magazine continues to give way more value for its cover price per issue than most mags manage in an entire year.

Tags dark side horror magazine the dark side