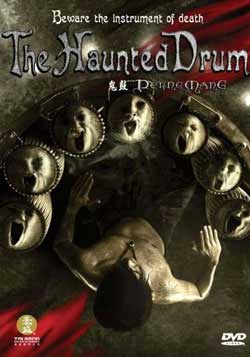 A young Thai musician joins the house of a renowned drama school master in the Panthumthani province and discovers both horror and love focused around an enchanted set of drums harboring a propensity for evil.

The Examination: Sometimes gory romance yarn from Thailand focused upon a drumming disciple and a beautiful ghost proverbially (and literally) strapped to a multiple-head drum set yielding a legacy of violence called the perng mang.

A twenty-something instrumentalist Ping (Kate Thunthup) finds himself partisan to a near-penniless master, Duang, whose specialty is music and dance. Teacher Duang binds Ping and his fellow band pupils by an ancient rite, lest they suffer tortures of the damned due to separation. A protective essence (one also bearing a malicious propensity for body tearing and dismemberment) lingers over Duang’s house through the spiritual encapsulation sheathed inside a semicircular set of drums known as the perng mang.

Legend has it that perng mang possess phantoms who watch over their host players, particularly those deemed worthy of the honor. All else, well, you can figure out by attrition something particularly nasty will befall those unworthy.

Perng Mang: The Haunted Drum is simplistic in its approach in the manner our protagonist Ping has an inquisitive and pure of heart spirit which leads him to discover a young girl named Tip (Woranuch Wongsawan) in a forbidden shack on Teacher Duang’s grounds. It doesn’t take long for Ping to realize he’s the only one who can see Tip, nor does it slacken his resolve to fall in love with her. Anyone else in the mood for some Placebo right about now?

Before the story drags into a hopeless Thai version of Ghost Whisperer, directors Nathapeera Chomsri and Sarunya Noithai have already whipped out the gore in meted measures as Duang’s students are ground up in variously disgusting modes courtesy of the perng mang in which one student bangs his head so fiercely against the drum heads his eyeball pops out. In a later sequence, one of the students having turned traitor from Duang’s house to the rival Deputy Muen’s (Anusorn Techanpanya) school swallows a sharp object in the midst of a drumming duel to the point it bloodily cuts through his spurting esophagus. One of the film’s ghastliest casualties comes via a turncoat female dancer from Duang’s residence in which she is compelled into a limb-splintering dance of death.

These impactful kill scenes undermine the sweetness and light of Perng Mang: The Haunted Drum’s inherent love fable in which Ping and Tip profess their love for each other, only to learn Tip is the spirit presiding over the perng mang. As Deputy Muen covetously steals the drum set from Duang, a fiery finale (including a particularly meaty cranial ripping sequence) reveals Tip long ago sacrificed her skin to the drum set as a way of keeping watch over her stepfather, who of course is Duang. Another of the students, Pai, has bloodline ties to Duang, for the record. Tip’s propensity for blood-spattered killing is unsettling particularly in the way she is sensitive and sensual with Ping yet viciously cruel to just about anyone else.

Having found her true love with Ping (whom in the prologue of the film is borne with a family ring and a scroll which only he can decipher and which figures into the ending), Tip’s soul can finally know peace upon release from Ping. This sets up for an unnecessarily-dragged weepy finale which at least ends poignantly with Ping inheriting the drama school. Still, isn’t it disturbing how Ping commiserates himself to a savage killer, albeit the revelation is withheld until the end?

Perng Mang: The Haunted Drum works only because the horror scenes are so grotesque they redeem the film which tries to be too clever with its love-from-beyond theme, which you see all of it a mile away. The film is nonetheless nicely filmed, the gore and zombie makeup is quite good and overall it’s set at a smooth pace. Its best attribute is the established a state of calm to a very quirky horror story where if you bang the drum, it’s likely to bang you back and hard…

A bit stupid in theory, yet Perng Mang: The Haunted Drum is precocious enough to embrace its sophistication as a means to maul your eyes with gruesome terror in pinpointed doses.