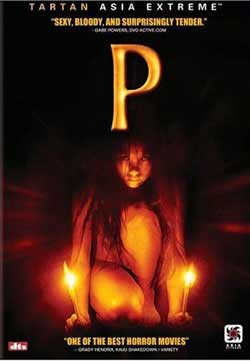 An orphan (Suangp*rn Jaturaphut) must put the magic skills she learned from her grandmother to the test when her elderly caretaker falls ill. Taking up work as a go-go dancer to pay for her grandmother’s medicine, she uses her powers for good … or is it evil? Writer Paul Spurrier also directs this chilling Thai-language horror film set amid the tranquil beauty of rural Thailand and the seedy streets of Bangkok.

It was cool to throw on a flick I knew virtually nothing about other than that it was a horror movie and a foreign one at that hailing from Thailand. It begins with young girl named Aaw getting out of school and heading for home. She is a outcast and picked on by the other kids. On the way home she stops off at a serene lake for a quick dip in it’s calm and cool looking waters. While swimming beneath the surface a zombieish looking hand reaches up from out of the dark depths and wraps around her ankle and tries to pull her down but Aaw gets away and runs all the way home. At this point I was thinking ” Alright, this is gonna be some kind of lake monster movie akin to Creature From The Black Lagoon, Humanoids From The Deep, and Demon Of Paradise.” And if you actually know about Demon Of Paradise give yourself 2 points for being a hardcore cheesy monster movie aficionado! When Aaw gets home she tells her grandma that a ghost attacked her. ” So this is another ghost movie.”

I thought and was let down, but just a bit. I wanted a slimy amphibious man monster with a hunger for Thai food! But I guess I did get half of my wish by the end of the movie though. Turns out the grandmother practices magic and has been teaching its ways to her granddaughter. That’s why they are shunned by pretty much everyone in the surrounding villages. Unfortunately grandma is old and frail and sick and aint getting any better. She needs medicine but when Aaw journeys to the main village to get it she discovers she does not have enough money to pay for what she needs and in fact owes money to the lady she gets the meds from.

The lady tells Aaw that if she wants, she knows of a job in Bangkok that Aaw can work at and make more than enough money to pay for the medicine her grandma needs. Without having much of a choice Aaw agrees and takes a bus to the big city. Upon her arrival she is met by a girl a few years older than her that goes by the name of Pookie. Now, I gotta stop right now and say that a Phillipino friend of mine told me that pookie is a slang term for a woman’s va jay jay. Now, I know the people of Thailand and those of the Philippines speak a totally different language but I imagine….and hope that pookie means the same thing in both. So Pookie takes Aaw to a Go – Go Bar and introduces her to the Mamasan who tells Aaw straight away that her name is too hard for foreigners to pronounce and tells her she will go by the name of Dau. 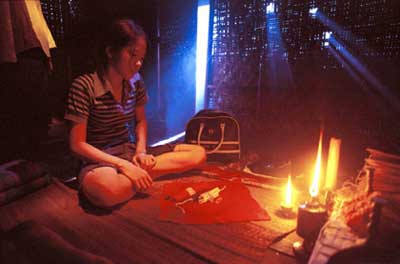 Now known as Dau she still really has no idea what’s in store for her but hey let her take a nap before she has to start working and when she wakes up some of the reality of what she has to do is thrust upon her. She has to dance onstage with a bunch of other girls but that is not all she has to do, oh no! A white foreigner wants to spend time with her and takes little Dau to a hotel and this is where things get dicey.

The actress playing Dau, Suangp*rn Jaturaphat, is very young, or at least she looks like she’s fifteen or perhaps seventeen tops but she does take her top off and even though it is in a dark room she is still undressing in front of a adult male. I’m pretty sure Thailand is a conservative country and off the top of my head I can’t think of any U.S. movies that push the boundaries this far and do it so casually. Not even TAXI DRIVER! Granted they don’t show anything beyond Dau sliding down onto her knees in front of the foreigner but even I felt awkward watching this and I am pretty perverted! And at this point I was wondering, when is the horror element coming in?

I mean, yeah, this is harrowing and sad what is happening to Dau but so far it was not a traditional horror movie with jump scares, creepy ominous camera work and music, or a killer skulking in the background. When the horror does come it comes from Daus use of magic. But magic has it’s rules and the rules in this movie are kinda like the rules for the Mogwai from GREMLINS. Anyone who uses magic can teach anyone they want to but they can not accept payment for it. Another rule is they can never walk under a hanging clothesline. The last is no matter how much a magic user begs, no matter how much they cry they can never eat raw meat. Okay I stole that begging and crying part from GREMLINS but the they can never eat raw meat part is true. And in the course of the film Dau breaks all three. And what happens when you break the three laws of sorcery usage? Well, you get possessed by a demonic spirit that comes out of you at night to feast on human flesh the way a lion feeds on gazelles.

I liked P, but to be honest it has a few things going against it. It’s a film from Thailand and the only Thai films I can think of that blew me away are those of Tony Jaa. But as far as horror films go this is the only one I have ever seen. And what kind of title is P? I saw on the imdb that P is short for POSSESSED but that isn’t much better than P. Then it takes awhile before anything horrific starts to happen. And to be really honest if you have never heard the Thai language before it is a little hard to get used to.

It does have it’s good points and the same thing that detracts from it is also the reason I like it. It was nice to see Bangkok, Thailand from the viewpoint of someone that is actually from there and knows the culture and see a movie from a country that isn’t represented much in film. The story of Dau and her plight in the city of working in a Go – Go Bar and being sucked into the world of prostitution basically against her will was somewhat compelling and I like the way they really didn’t like foreigners and didn’t trust them.

Then there was the possession part when the evil demon emerges from Dau and stalks the night hunting for fresh meat and hot blood, that was pretty neat but is actually not as cool as it reads. With that said though there are alot of movies where the ghost, phantom, demonic form or person possessed would at least look cool if not all that scary and for some reason when the evil Dau comes out she works on both fronts. She doesn’t turn into a monster, only looks like a demonic ghost and I know it is all done with CGI but it still works, looks cool and is a little eerie! She does eat human flesh and it could have been alot more graphic but they do more than just imply it and the film does have a downer if somewhat ambiguous ending.

I liked P, but with Hong Kong, Japan, and Koreas at the forefront of Asian horror I don’t know how P can fight through the throng of Asian horror releases and gain notice even though it is a bit better than alot of Japanese titles coming out these days.

I don’t think trying to hunt down P should keep you up at night but if it falls into your lap or see it at your local video store and you have a pension for Asian fright films it is worth a peek.

Lastly kudos to Paul Spurrier. Not only did he direct P but he wrote the screenplay, edited the film and did the music. It is a accomplishment just to direct a film and get it completed and then get it out for folks to see but he wore so many creative hats that my cap is off to you Mr. Spurrier!