The 2017 New York Comic Convention (NYCC) was huge. Cosplayers were out in force representing their favorite characters and the studios were doing their best to bring their latest adventures to the public. Whether you’re a Trekker, a Whovian, or a Star Wars fan (they still don’t have a designated fan name), there was something for you at the NYCC. 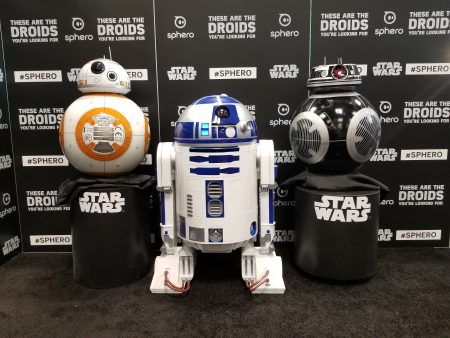 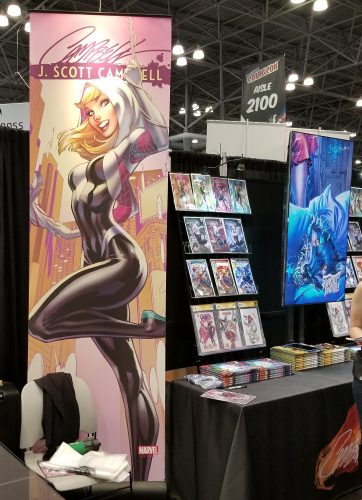 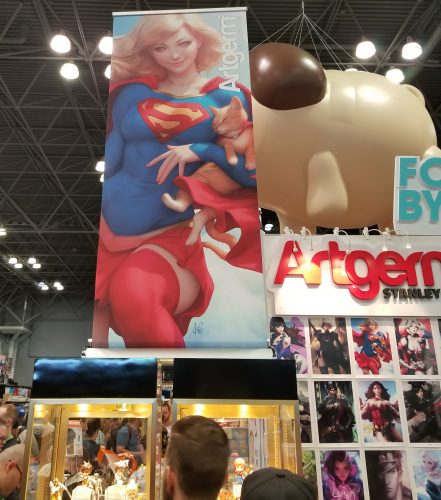 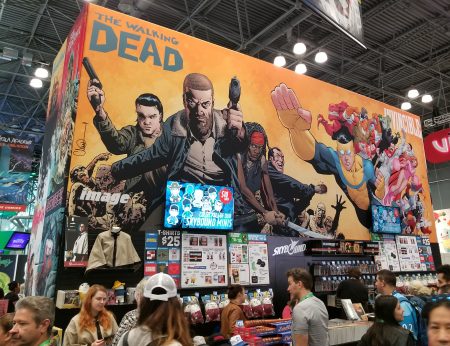 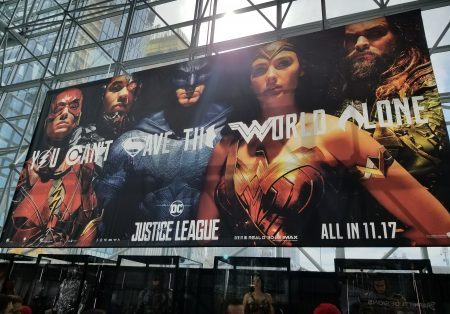 The name Terry Moore no doubt conjures up images of a gorilla holding up a beautiful piano player in the 1949 genre fan favorite Mighty Joe Young, but the Terry Moore I met recently at the 2017 New York Comic Convention (NYCC) is best known for his comic book work, specifically Strangers in Paradise (1993 – 2007) and Rachel Rising (2011 – 2016). He was appearing at the show to promote his latest work, Motor Girl, which deals with, ironically enough, a young woman and her gorilla. Mr. Moore was kind enough to speak with me regarding his work. 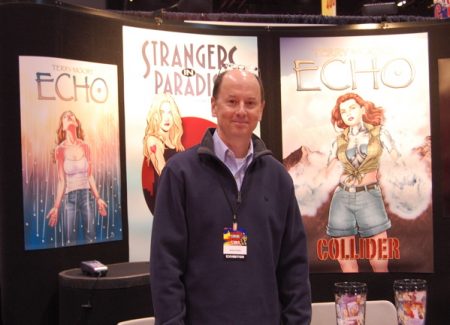 Jonathan Stryker: For our readers who may be unfamiliar with your work, where you were born and where did you grow up?

Terry Moore: I was born in Texas, but I grew up mostly in the South, all of those states. I also lived in Africa and my little sister was born there. I think that helped me open up a little bit and I also spent some time in England and abroad. I now live in Texas where I’ve lived my entire adult life. The reason why I stay in Texas is because it’s right in the middle. By plane ride, everything is three hours away. In almost every direction.

JS: I’ve only been to Texas once, specifically Dallas. I have friends in both Houston and Austin and I would love to get out the SXSW. Have you been there?

TM: No, I haven’t. Austin is a party town and they love that stuff. They pretty much let anybody come in and take over the town for a party. I live in Houston which is pretty close, it’s about two hours away.

JS: What were your interests as a child?

TM: I loved comics and guitar.

TM: Yeah, I play mostly electric guitar and I got my first one at age 13. I was writing songs and playing in bands. I was doing this pretty much my whole life. My wife married me while I was a working musician. When we started having children I wanted to get into editing. When I got tired of editing, I went into comics. Boom! There’s my whole autobiography.

JS: Did you start drawing at an early age?

TM: Oh sure, I have sketchbooks that I began writing in when I was eight and nine years-old. I remember being eight years-old and crying in frustration because I couldn’t figure out how to draw knees right. I was struggling with all that. I have all these old sketchbooks full of drawings I did of the Marvel and DC characters of the time.

JS: Do you think that you might look to publish these sketchbooks, or are they just for you?

TM: Well, who would want to see them? (laughs)

JS: It’s funny you say that. When I interviewed film director John Carpenter in 2010 I asked him if we would ever get the opportunity to see his very first movies, his “practice” films that he made when he was in school, and he emphatically said no. When I asked him why, he told him that it’s because they were awful. He and many filmmakers of his ilk, and of course this goes for any artist regardless of their discipline, are very protective of their first creations because they are simply not fond of them. They are embarrassed by them and they feel they have no place in the collective consciousness of entertainment. I disagree, I would love to see all of Steven Spielberg’s early work, in addition to George Lucas early films, just to see how they progressed as filmmakers over time. Do you feel the same way about your early work?

TM: Yeah, it would be like a kind of a scientific thing to look at this mess and look for any seeds of what was coming. I believe that is easier for artists to show their early work than it is for writers to show their first writings, but because that truly is embarrassing. With art you can just say, “Oh, well, this is primitive art.” It’s no worse than graffiti or something like that. 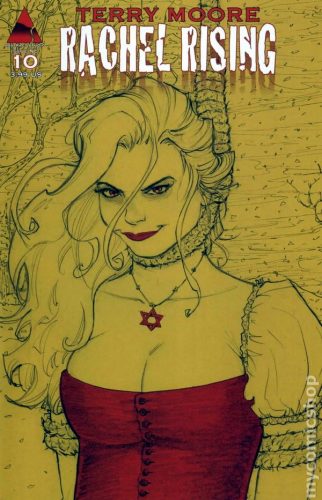 JS: Who are your artistic influences?

TM: The magazine illustrators from the 1920’s and 1930’s, the Impressionists, basically any artist and musician since 1850. I love all those things. They all come from the same planet to me, they all work together. What I love about them, whether they are musicians or artists, is that they were looking at society as a big picture or a big canvas, is and they would make these huge symphonies out of them, whether they were visual or aural. So, I learned art lessons from all of them. Now, in terms of time comic books I was never really influenced by, say, Jack Kirby and all the usual, which is why I think my work looks different. I’m more influenced by illustrators like Chuck Jones and cartoon strips and comic strips and animation. So, I’m basically a cartoonist who was drawing a little bit more realistic.

JS: How did Strangers in Paradise get started?

JS: Are you a fan of Daniel Clowes (best known for Ghost World)?

JS: Have you ever met him?

TM: No, I’ve never met him personally, however one time when I was in Europe I was at the next table eating breakfast when he and I were both attending a show. It might’ve been in Barcelona or someplace like that. I didn’t dare approach him because he lives in a different world and I just really admire him from afar. 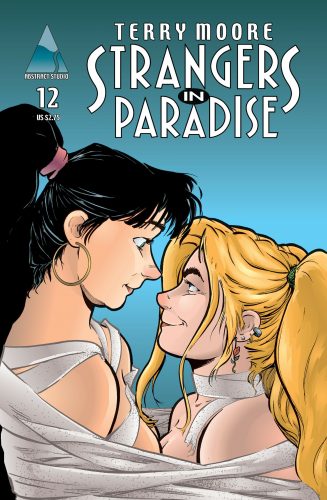 TM: Yet, it’s in its early in initial stages. It’s something that I’m working with Angela Robinson on, she’s the director. She’s someone who has really come into her own over the last ten years. She’s got a lot of movies and television shows under her belt. She’s very good. She’s been wanting to do this since day one. Now she’s at the point where she can get her own green light on projects and we have funding and a terrific agency. I’ve gotten the right to go home and write the first draft of the script so this way I at least know that it will get started in the right direction. I have a feeling I will get to cooperate a little bit that they will shut me out, because Angela has been very good to me. 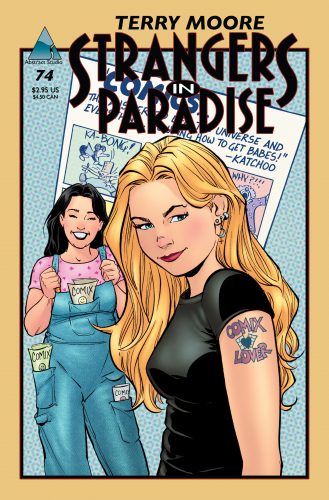 JS: It looks as though Strangers in Paradise will return in January as a comic book?

TM: Yeah, that’s true. 2018 is the 25th anniversary of my career and Strangers. In January of 2018 I’m starting an all-new series and it will run throughout all of 2018. There will be about nine or ten issues. I want to make sure that I can bring these characters back and it wouldn’t look like an old reunion band kind of thing, that they’re still cooler than us and I have to prove it. I’m going to go home and lock myself in the tower and get that first issue going. I think I have a great idea for it. I’ve already done the first cover and when people see it they’ll know it’s going to be a little different. 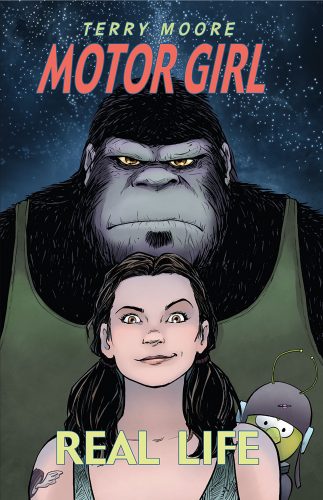 JS: You have a new comic book out now called Motor Girl.

TM: Yeah, I wanted to do my own Calvin and Hobbs-type story, with an invisible friend. It’s a genre within itself. There are lots of movies and stories about that very set-up. Because we live in a time of war now, my main character is a three-time war vet, with Post Traumatic Stress Disorder, and this invisible gorilla is her coping mechanism. So, the story gets into not just the action and the adventures that they have, but also her psychology. When you send people off to do something that is against human nature they come back scarred. It’s extraordinarily difficult to deal with. So, the story essentially delves into that. 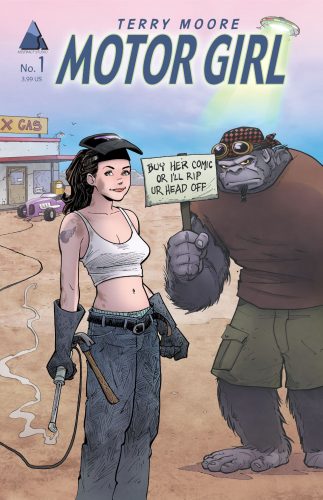