Home | Scream Hollow: One Hell of a Haunt

Scream Hollow: One Hell of a Haunt 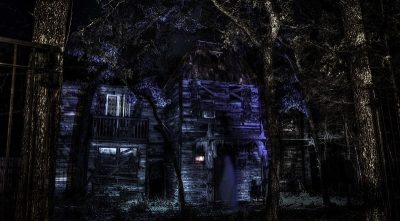 Thirty miles outside of Austin, Texas you can see stars sparkling in the dead of night as isolation creeps in. Turning onto a dusty and rocky old highway road, shit got abruptly real. It’s been well over ten years since I’ve been to a haunt. However, I love Halloween and appreciate a solid scare like most other gore hounds.  So, when I rolled up to Scream Hollow in Bastrop, Texas, I was excited but also uneasy. As it turns out, my apprehension was ridiculously justified. 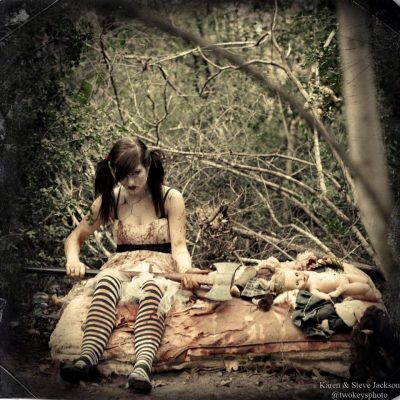 Scream Hollow consists of four attractions: Mansion of Terror Phantoms, Zombie City, Slaughter Circus, and Wicked Darkness The Maze. Twenty year haunt veteran, Norm Glenn, has made scaring people a personal passion. Creating his first haunt in high school, he went on to run Mansion of Terror for seven years up until 2009 and spent three years constructing Scream Hollow alongside a crew of seventy-eight builders, carpenters, set-designers, prop designers, as well as lighting and sound technicians. Each attraction is tailored to a storyline and set up to basically exploit every fear one can have including claustrophobia, ghosts, chainsaws, jump scares, gore, clowns, you name it. Each house has it’s own distinct layout and story which makes for an even more engaging, immersive experience.

The Mansion of Terror’s decor was fantastic and reminiscent of a backyard version of Disney’s Haunted Mansion. Twisting and turning from room to room, the progression was fairly natural and the characters were eerily engaging. Once outside, I assumed it was over but nope. Not fucking done. Wandering through the woods with people jumping out and following you makes for an even more disturbing experience. The set design was elaborate and the characters’ make-up were unique and intriguing if you can stay focused enough to not try and run from them or cover your eyes in terror. 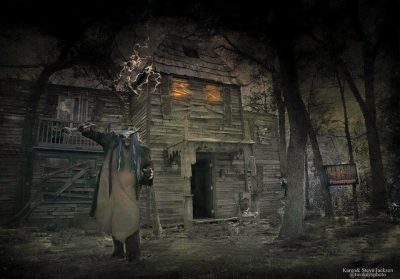 It’s a big year for clowns with the recent release of IT, and Slaughter Circus definitely capitalizes on the success of how truly terrifying a creepy clown is to the general public. While there were limited jump scares, the aesthetics were engrossing and menacing. With the success of The Walking Dead and recent passing of horror film legend, George A. Romero, it’s understandable why Zombie City had the longest lines.  Motion activated zombies and a notable prison scene had me slowing down to take a closer look but also jumping left and right.  Let’s just say I haven’t experienced this much of an adrenaline rush in years.

Now… this maze. So, as visually stunning as Scream Hollow is, your vision is ripped away from you as you navigate through the dark. This sort of visual sensory deprivation is ironically one of the most terrifying aspects of the haunt. The feeling of being lost accompanied by claustrophobia really sets in and starts to mess with your perception which makes for a disorienting and dreadfully great time. So much so that people were literally running out of the exit. 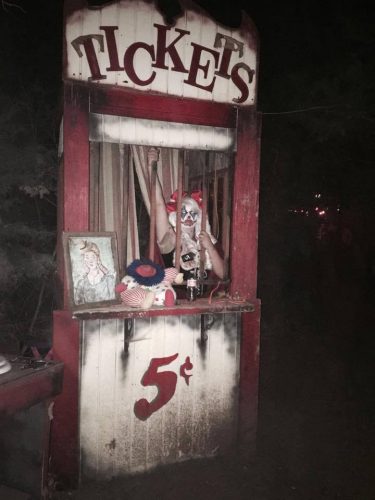 Once you’ve had the shit scared out of you or if you need to take a breather between attractions, you can visit The Rabid Bat Vampire Bar for a beer or Cackling Witch Cafe for a spooky snack.  However, don’t expect to be sitting alone and this writer suggests sitting with your back against a wall (just sayin’).  Scream Hollow delivers all the diabolical tricks and treats of the Halloween season. Norm Glenn has mastered the art of the haunt and there are numerous reasons why this place is one of the best in the country.  While the woods are lovely, dark, and deep, Glenn has a successfully created a sinister gem buried among the trees that will haunt long after you escape. Consider yourself warned.

Scream Hollow runs through Halloween and then reopens for Pitch Dark November 4th and 5th. Tickets and info can be found at www.screamhollow.com.