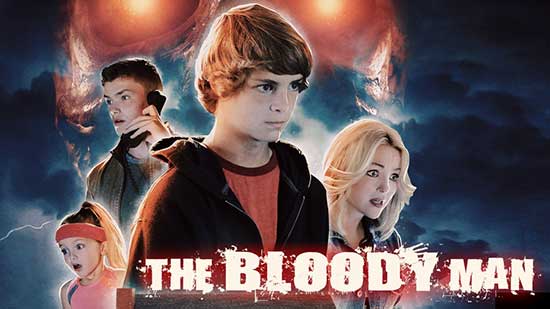 Do you miss the 1980s as much as I do? Do you miss films that really capture the feel of that decade?  Then you are in luck because The Bloody Man is coming and it is a movie that is sure to take you back to the 80s and scare the hell out of you in the process.

The film is the brainchild of writer/director/ actor Daniel Benedict of Bunni and Fall of Grayskull fame and is sure to deliver. I know Daniel personally and know for a fact that when it comes to horror and the 1980s this guy knows his stuff so there is no way The Bloody Man is going to disappoint.

So what’s it all about? Here’s the official synopsis:

The story takes place in the 80s and 9-year-old Sam is struggling with family, friends, school, and the most evil being he can imagine…The Bloody Man, who is unknowingly summoned and will stop at nothing to destroy everything Sam holds dear.

Sounds pretty cool, huh? Not only does it have an interesting premise but it also has some pretty awesome names attached to it so far as well including Tuesday Knight and Lisa Wilcox (of Nightmare on Elm Street 4 and Nightmare on Elm Street 5), and Knight is also working on the soundtrack for the movie along with some other pretty talented people who are going to be contributing as well.

The movie itself is in the early stages of production at the moment and as you know, making films isn’t cheap so there is a Kickstarter page set up for it if you would like to donate to it. Of course, there are some awesome rewards for donating to the project as well so check out the link below for more information.

The Bloody Man sounds like it is going to be quite awesome and I am looking forward to it (Hey, cheap plug, my wife and I have parts in it so check it out!) as I am sure a lot of other people are as well. This movie has potential to be all sorts of kick ass so let’s give it some love!